Do we need to do a weekly series on things you shouldn’t put in your vagina now?

Glitter bombs are the unicorn frappuccino of sexual health products. 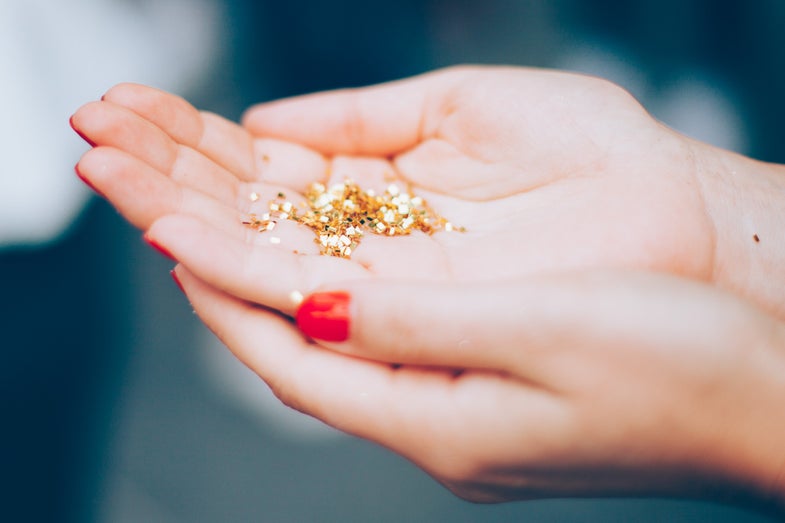 Bodies are gross. We can all agree on that, right? They make mucus and gas and various types of goop that emerge from different holes—and for many of us, that includes the vagina. Discharge is a normal part of life, but that doesn’t mean it’s always enjoyable. Maybe you’re even self conscious about the fact that your genitals are sometimes a sticky, gooey mess. What if your partner realizes that you’re, like, human and stuff?

But why would adding glitter to that scenario make it better?

Guys, come on. When they said “glitter is the herpes of craft supplies,” they didn’t mean you should literally try to make it sexually transmitted. But a woman in Houston, Texas did just that. Her website, Pretty Woman Inc., has already sold out of their Passion Dust suppositories, forcing her to shut down temporarily to fill the orders. In case you were wondering about the little bombs, she provided a very helpful FAQ.

If, for instance, you were wondering whether this is safe, she has a clear answer: yes. She says this confidently because (as she told the New York Post) she has “experience-based evidence” that they’re fine. She claims that the pills contain cosmetic grade glitter, then later lists it as edible glitter, even though those are two separate things. But don’t worry, because the vaginal fluids are apparently a “natural coating” for the glitter, so there will definitely be no irritation from the little particles rubbing repeatedly against your vaginal walls and your partner’s penis while having sex. The only thing she cautions against? If your partner has asthma, they could inhale the glitter and have an attack.

ok this is a real product. passion dust.

Just don’t tell anyone who might be having sex with you. Pretty Woman herself says “If you [sic] partner is a guy then don’t tell him!” She wisely notes that “How often do men know what they like until we do it to them anyway?…exactly.” And also that “When he looks down at his ‘Thing’ [emphasis hers] and sees it shining like it’s a 24K gold magic stick it will be weird, but he won’t be mad!”

Which all begs the question: if you wouldn’t trust this woman to write a typo-free email, should you trust her with your vaginal health? And more to the point, if you’re not mature enough to call a penis a penis, maybe you shouldn’t be having sex with the owner of one. Or non-consensually covering one in gold glitter. The creator also goes on to suggest that customers use Passion Dust as some kind of sparkly chastity belt—after all, it’s certainly hard to explain oozing glitter to a partner who didn’t partake in the bedazzled sexual encounter itself—which is frankly troubling, but also entirely your own business.

But immature relationship games aside, this is probably not great for your vagina. Edible glitter is sugar-based, so while it might make your fluids taste sweeter in the short term, you’re asking for a world of bacterial hurt in the long run. Bacteria love sugar. And when you put a bunch of sugar in your vagina, where lots of naturally bacteria grow, you help them multiply. Stop doing that. That’s how you get bacterial vaginosis, where the natural flora in your vagina get off balance. You’ll end up with irritation, a lovely fishy discharge, and may require a week’s worth of goopy antibiotic cream to put things right again.

Dr. Jen Gunter, an OB/GYN known for dragging questionable practices like vagina glitter bombing out into the harsh light of medical reason, points out in a recent blog post that even if the product actually contained cosmetic glitter, which is plastic, it could still be dangerous. “Could the plastic be a nidus for bacteria? Sure. I’ve seen a nasty inflammatory vaginal discharge from sand so this could be a similar set up,” Gunter writes. “Might the little flakes of plastic produce vaginal wall granulomas ? (A granuloma is walled off inflammatory mass produced by tissue in response to a foreign body). They could.” Gunter also reminds her readers that healthy vaginal bacteria and lubrication help protect the owners of said vagina from sexually transmitted disease, so any cosmetic product that throws things off could have serious health consequences. Long story short: do not put glitter of any kind inside your vagina.

In her defense, the entrepreneur behind Passion Dust doesn’t guarantee that the product is safe for everyone. She hedges. She waffles. And then she goes ahead and sells it without any real testing. But hey, douching isn’t advisable either (it upsets the natural balance of vaginal flora), and you can buy that in any drug store. And yes, as she points out, tampons also come with risks and plenty of people use them anyway. Lots of things come with risks, and yet we do them.

Of course, the flaw in that logic is that not all risks are created equal. Gynecologists don’t think you shouldn’t ever put anything in your vagina, they just don’t want you putting untested, useless products in there. Tampons are generally safe and give many folks the freedom to carry on as normal during menstruation. Passion Dust is basically the unicorn frappuccino of sexual health products, if Starbucks drinks were known to occasionally cause itching and smelly discharge.

And yes, it’s entirely possible that you’ll use these glitter bombs and be fine. Maybe your vaginal bacteria are particularly hardy, or the glitter doesn’t happen to bother you. But why would you risk it? Your vagina doesn’t need to sparkle to be attractive. For some weird reason, there’s this notion that vaginas are more gross than your standard body part. Heaven forbid your vagina smell like a vagina! Meanwhile, people with penises generally don’t go around worrying that they smell too much like penises. We all just accept that this genitalia has its own weird quirks and smells. Why can’t we accept that about vaginas?

Everyone’s body is a little goopy sometimes, and that’s just fine. Take a shower and enjoy some sparkle-free sex.