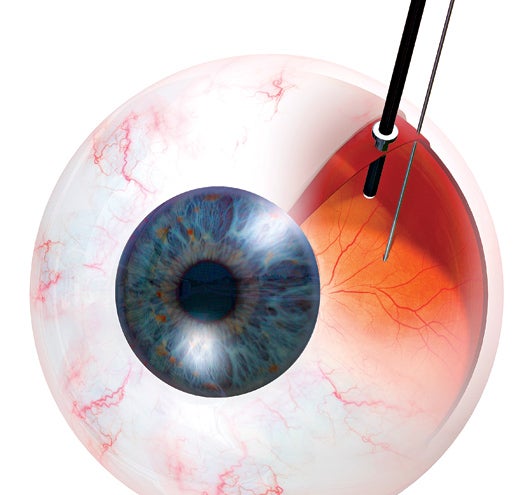 Blindness, brain cancer, vegetative states: These are among the most hopeless conditions without cures—yet. Now doctors are turning to unorthodox methods to solve some of medicine’s most intractable challenges. The early results are in, and they look promising.

Challenge: A genetic disease degrades sight in children and blinds them by adulthood.
Radical Cure: Replace the defective genes with healthy ones.
Status: Three to five years to FDA approval

Tami Morehouse was afraid to open her eyes at the sound of her alarm clock every morning. Her vision had deteriorated to a brown haze over the past three years. She couldn’t tell the sky from the ocean or make out people’s faces. The 45-year-old mother of three knew that, eventually, she would wake up one day and her world would be black. But a couple of weeks after doctors injected one eye with new genes, she could see the refrigerator door. Four months later, she watched her 12-year-old daughter steal third base.

Morehouse has Leber’s congenital amaurosis, a single-gene defect that prevents the retina from producing the proteins that play a vital role in maintaining the health of the eyes’ light receptors. For most sufferers, vision begins failing in early childhood. Without the treatment, there is no question that she, or any other sufferer of LCA, will eventually go totally blind. But Morehouse was among 11 other LCA patients, ranging in age from eight to 33 years old—”I was the oldest, blindest pioneer,” she jokes—in a recent clinical trial at the Children’s Hospital of Philadelphia. They received a shot of genes near their retinal cells to repair their light receptors. Although most of the participants entered the trial with vision similar to the brown haze that Morehouse experienced, today at least six of the participants’ vision has improved such that they are no longer considered legally blind.

The therapy stems from nearly 20 years of research on hereditary blindness in mice and dogs by Jean Bennett, a molecular geneticist at the University of Pennsylvania School of Medicine. With additional studies, Bennett says that she could have a drug ready in three years that any retinal surgeon could administer to cure LCA. But she’s not stopping there. Only five children born in the U.S. annually have the same type of LCA as Morehouse, but focusing on a rare single-gene defect is a good way to develop a model for treating more common ailments. “Our success shows that this technique is possible,” Bennett says. “We think this could be a platform for a lot of different blinding diseases.” Within the decade, she says, therapies involving similar eye genes could improve sight in people with other mutations, such as retinitis pigmentosa or macular degeneration.

Morehouse, like the other patients in the first study, received an injection in only one eye (they left the other eye alone as a control). “Call me greedy,” she says, “but I keep reminding my doctors, ‘Please don’t forget my other eye.’ ” This spring, Bennett and her colleagues hope to continue to test the LCA gene therapy in both eyes of younger patients. Bennett is currently applying for additional funding for a larger trial and to finish treating her first 12 patients. She hopes it comes soon—the new genes can’t help once all the retinal cells have died: “It’s an emotional race for all of us.”