What Happens To Your Body When You Get Drunk And Stoned At The Same Time?

The science of the spins 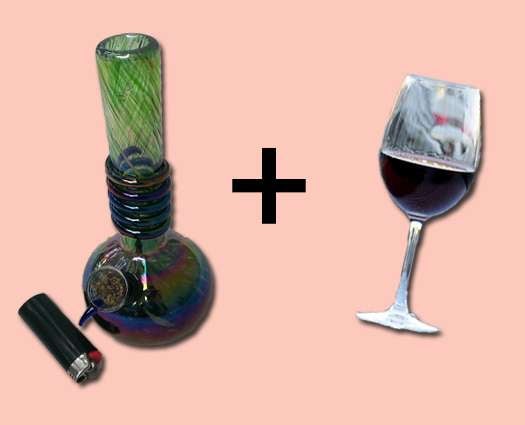 The intoxicating effects of alcohol and of marijuana have been widely studied, but their combined effect—getting “cross-faded“—is woefully underexplored scientific territory. Here’s a look at what we know about how pot and booze together affect the brain.

First, the basics: Marijuana contains THC (tetrahydrocannabinol), which acts on the brain’s cannabinoid receptors. Alcohol depresses the central nervous system. Trying to compare the two isn’t even like comparing apples and oranges, says Gary Wenk, a professor of psychology and neuroscience at Ohio State University. “It’s apples and vegetables. They’re very different drugs.” An extremely simplified explanation would be to say that THC largely has cognitive effects, like paranoia and a distorted sense of time, while alcohol mainly affects motor skills, making it hard to walk in a straight line and causing slurred speech.

After individuals drank a large dose of alcohol, the THC levels in their blood plasma nearly doubled.

So does combining weed and alcohol just add their respective effects together? Not quite, says Scott Lukas, who teaches at Harvard Medical School and has researched the interaction of various drugs. In a study published in 2001, Lukas found that after individuals smoked marijuana and a drank large dose of alcohol, the equivalent to a couple of shots, the THC levels in their blood plasma nearly doubled compared with people who smoked pot and consumed a placebo drink. The buzzed people in the study also detected the effects of marijuana sooner than those who only got stoned, and rated their high as subjectively “better.” This suggests that getting boozed up causes more THC to reach the brain, via the bloodstream, within the first few minutes of ingestion. One explanation for this finding is that alcohol may cause changes in blood vessels that boost the absorption of inhaled THC.

Lukas isn’t worried that the combination could be lethal, but he says that getting cross-faded could be more risky that just getting drunk or high alone. With more THC hitting the brain thanks to the ethanol in alcoholic drinks, the usual effects of marijuana—like impaired judgment and increased heart rate—are stronger. Which means accidents like drownings and car crashes could be more likely, Lukas says. He also points out that the amounts of drugs approved for his research were lower than the levels that people often use while out partying.

Further research is needed on the additive effects of munchies and drunchies.