Babies Display Schadenfreude Toward People Who Are Different

In a new study, babies like it when people are mean to those who are different from them. 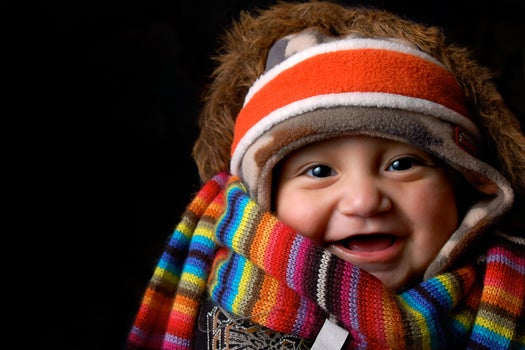 Humans have a tendency to gravitate toward those that they share something with — whether that’s a common nationality, a shared love of a certain band or a favorite food. Yet babies don’t just like individuals they have something in common with — they also prefer people who are mean to dissimilar individuals, a new study in Psychological Science indicates.

In previous studies, infants have shown a preference for people who help others. However, that goodwill may only extend to those they identify as being like them.

To study this, (and put themselves in the running for the “most fun in research” award) a group of psychologists put on a puppet show for 9 and 14-month-old infants. The babies first had to chose which food they preferred — either green beans or graham crackers — and then watched the puppet show, where one of two rabbit puppets shared the same preference, and one had the opposite.

Later, the babies watched other puppet shows featuring either the similar or dissimilar puppet plus a “helper” and a “harmer” dog puppet. The helpful dog caught a ball the rabbit dropped and threw it back, whereas the other dog caught the ball and ran away with it. When the babies saw the experiment with the rabbit with similar tastes, they preferred the nice, helpful dog puppet, but they preferred the dog that stole from the dissimilar rabbit puppet.

“These findings suggest that babies either feel something like schaudenfreude – pleasure when an individual they dislike or consider threatening experiences harm,” according to lead author Kiley Hamlin of the University of British Columbia. “Or babies have some early understanding of social alliances, recognizing that the ‘enemy of their enemy’ is their friend.”

While ganging up on someone who hates your favorite snack food seems irrational, the effect stretches beyond infancy:

Of course, adults do not explicitly view those with different food preferences as deserving of mistreatment. However, both adults and children negatively judge even trivially dissimilar individuals and anticipate that these individuals will behave poorly in the future (which may render them deserving of punishment). In some cases, children will themselves carry out harmful acts against dissimilar others, which suggests that they may view such acts as justified.

While it may not mean all babies are doomed to be racist, it does show that the tendency to distrust or dislike people unlike ourselves develops even earlier than we thought.