BeerSci: How Beer Gets Its Color

Meet the two chemical reactions that most influence the malt character and color of your brew. 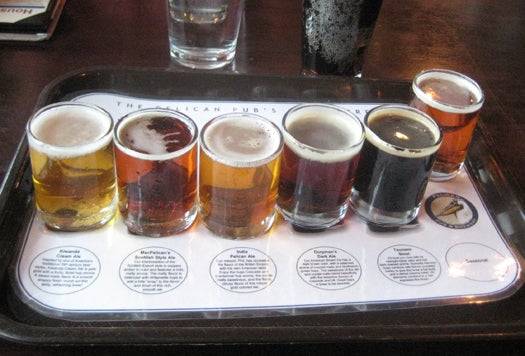 The sampler flight from Pelican Pub and Brewery in Pacific City, Oregon, shows the range of colors and opacities beer can have. From left to right, the beer styles are: cream ale, scottish style ale, india pale ale, brown ale, stout, and a seasonal whose identity I cannot remember. Team BeerSci
SHARE

Before you read this column, I urge you to pop open a belated birthday beer. Pour that beer into a clear glass (pint or tulip, your choice), hold it up to the light, and take a good look at the color.

Two basic chemical reactions are responsible for beer being “beer-colored” rather than clear like water. One reaction couples amino acids to sugars; the other spurs sugars to decompose. In addition to adding color to beer, the products of these reactions also add significant flavor to the resultant brew.

Beers of Many Colors

The sampler flight from Pelican Pub and Brewery in Pacific City, Oregon, shows the range of colors and opacities beer can have. From left to right, the beer styles are: cream ale, scottish style ale, india pale ale, brown ale, stout, and a seasonal whose identity I cannot remember.

The Maillard reaction is also known as “browning.” When you toast bread or sear meat, that’s the Maillard reaction. In beer making, kilning malted barley kicks off the Maillard reaction to produce darker malts such as Special B, chocolate malt and black patent malt. It and a process called caramelization are what gives roasted malts their characteristic caramel or toasty flavors, and beers such as stouts their characteristic dark color. (Long boil times will also spur these two reactions, so if you want a light-colored beer, make sure to keep boil times short.)

The Maillard reaction can be summed up as “amino acids react with a reducing sugar.” There are many amino acids (the building blocks of proteins) and many sugars in malted barley, so hundreds of possible chemicals can result from this process. The basic reaction looks like this: 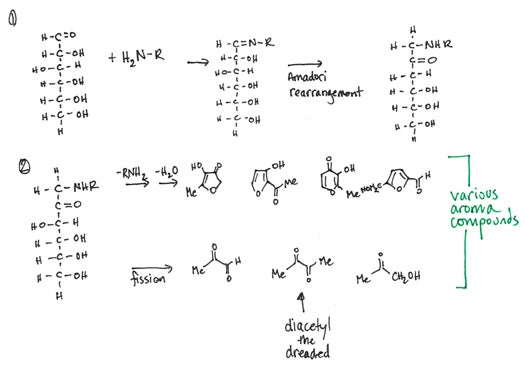 The Maillard reaction couples an amine with a reducing sugar, such as glucose. The resultant compound then makes aroma compounds such as furans and diacetyl.

The Maillard reaction usually happens at elevated temperatures, but it has been known to occur at room temperature as well.

Caramelization, on the other hand, is a form of pyrolysis: thermochemical decomposition without the presence of oxygen. Basically: you heat sugar until it falls apart by itself. Again, there are many possible products of caramelization, but some of the main aroma compounds are furans, diacetyl and ethyl acetate. Caramelization only happens at elevated temperatures.

Caramelization is an example of pyrolysis, or thermochemical decomposition. The six-carbon glucose molecule falls apart to create a wide variety of aroma compounds. Note the similarity to some of the products of caramelization to that of the Maillard reaction.

Here’s how the various roasted, toasted, chocolatey, biscuity malts are made.

First, barley kernels are malted — that is, they are allowed to partially germinate. During this process, some enzymes in the barley kernel break down the starches in the kernel’s endosperm to free sugars such as fructose and glucose. During normal germination, those sugars would be used to fuel the spout’s initial growth until it can start photosynthesis. But maltsters — those people who malt the barley — arrest the germination process shortly after it begins, by heating or drying the kernels. Depending on which kind of malt the maltster wants to make in the end, the kernels can be put into the kiln immediately, or they can dry the kernels first before kilning them.

In the case of the undried kernels, the maltster puts the green kernels directly into the kiln. The heat activates other enzymes in the kernel, and much of the starch in the kernel is converted to liquid sugar. Then the maltster increases the temperature of the kiln to between 220 and 320 degrees Fahrenheit; that’s when most of the caramelization happens. The liquid sugar in the kernel begins to thermally decompose, creating compounds with buttery, or raisiny, or otherwise toffee-like aromas. How much and to what proportion those compounds are created depends on the temperature and duration of the roast. These end up as the so-called Crystal or Caramel malts that you might have seen in some of recipes BeerSci has presented.

[An aside: On the diagrams, I sketched just a few of the aroma compounds created by the Maillard and caramelization reactions, including 4-hydroxy-5-methyl-3(2h)furanone, which contributes fruit or jammy characteristics, maltol, which smells like cotton candy, and diacetyl, which gives the beer a buttery aroma. I say “dreaded diacetyl” on the graphics because this compound is one of the most common off-flavors in beer, the result of too-high fermentation temperatures or other brewing faults. A little diacetyl is OK; a lot can make a beer undrinkable. Team BeerSci just dumped a small batch of beer down the sink due to an overwhelming diacetyl component in the finish.]

Dried kernels, on the other hand, don’t go through as much caramelization during kilning. Instead, Maillard reactions predominate, resulting in toasty aromas like, well, fresh toast, or chocolate or roasted coffee flavors and aromas. Toasted malts (those with toasty flavors from the Maillard reaction) such as amber malt, are subjected to heat of about 335 degrees F. Roasted malts, which have a mixture of Maillard reaction aromas and caramelization aromas, experience temperatures between 420 and 480 degrees F. Roasted malts include chocolate malt and black patent malt.

AND WHAT ABOUT THE COLOR?

The color that a malt contributes towards the final beer is typically indicated in degrees Lovibond. For example, Crystal 20 is a crystal malt kilned to a color that coordinates to 20 degrees Lovibond, and is lighter than Crystal 80. Most pale base malts such as 2-row barley are less than 5 degrees Lovibond. But because crystal/caramel malts are processed differently than toasted malts, Crystal 20 will have a very different character than a toasted malt that’s also 20 degrees Lovibond. Further, within the dry-kilned toasted/roasted malts, the degree of toast or roast falls on a continuum. As far as I’ve seen, there’s really no hard or fast line of demarcation as to what might be called a toasted malt versus a roasted one on the consumer side. You just have to read others’ experiences with a particular malt (and each maltster might have their own quirks) and do the experimentation yourself.

To determine the color of beer, brewers use a different scale: SRM (Standard Reference Measurement), which is how much light at 430nm can get through 1 centimeter of beer in a photometer. Obviously, it’s tough to use the SRM scale on a computer screen (unless it’s color-corrected), but this is roughly what the SRM scale looks like: 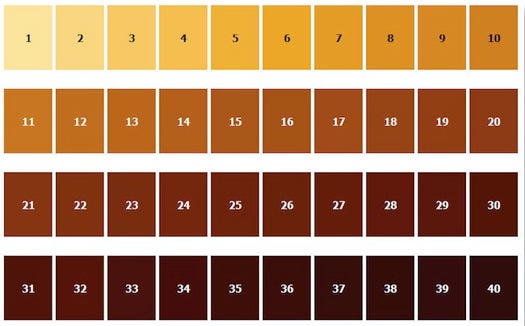 A rainbow of malty beer colors.

The flavors created by the Maillard reaction and caramelization can be pretty strong, and can overpower a beer if the brewer isn’t careful. That’s why a lot of recipes, whose total grain bill might be over 10 pounds, call for only a few ounces of, say, black patent malt or Crystal 120.

To get an idea of how much color a small amount of specialty grain can give a beer, get a sample of Sierra Nevada’s Celebration Ale. It’s about a 12 on the SRM scale. For a five-gallon recipe of that beer, you would need 11.5 pounds of pale malt and only 1 pound of Crystal 35L. If you wanted to make a darker beer (say, 35 SRM) without changing the flavor significantly, add three or four ounces of debittered black malt.

At the other end of the scale, we just drank the first bottle of a Russian Imperial Stout — a very dark beer with huge roasted, chocolate and burnt malt character, and high alcohol content — we brewed a few weeks ago. According to the recipe source, it has an SRM of 129 (super-opaque black), but I haven’t measured it myself, so take that with a swig of beer. Because this beer has such a high starting gravity, we only made 2.5 gallons of it. It’s based on a recipe from 1914 of the Courage Imperial stout, highlighted by Ron Pattinson. We simply don’t have a big enough mash tun and boil kettle to do a five-gallon all-grain batch of this beer.