Captured: The First-Ever Images of Atoms Moving Inside a Molecule

Ohio State University researchers have captured the first-ever images of atoms moving within a molecule using a novel technique that... 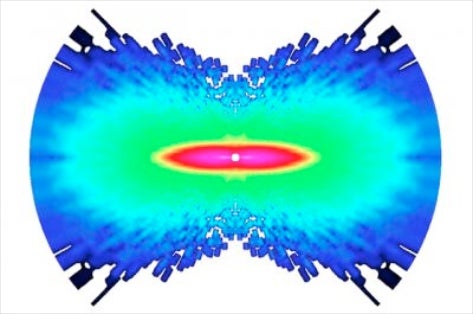 Ohio State University researchers have captured the first-ever images of atoms moving within a molecule using a novel technique that turns one of the molecules own electrons into a kind of flash bulb. The technique has yielded a new way of imaging molecules, but could one day help scientists to intimately control chemical reactions at the atomic scale.

The images were snapped using an ultrafast laser, which fired 50 femtosecond (a femtosecond is a quadrillionth of a second) pulses at the molecule to knock a single electron outside of the molecules outer shell. This electron, having been knocked out of its proper place, comes crashing back into the molecule, and in doing so it provides the kind of illumination the researchers need to image the molecule itself.

By measuring the scattered signal of the electron as it collides with the molecule, they were able to reconstruct the inner workings of the molecule, including things like the positions of the atoms nuclei. Moreover, because there is a very short lag between when the electron is knocked out and when it comes crashing back, the researchers are able to capture the movement of the atoms within that period, essentially allowing them to make a frame-by-frame film of atomic motion within molecules.

For their experiments the researchers used oxygen (O2) and nitrogen (N2) molecules because their molecular structures are well understood. The next steps will involve imaging more complex molecules and, eventually, figuring out the potential for precisely controlling chemical reactions right down to the atomic level.