Because Brussels sprouts are bitter, and kids generally don’t like bitter tastes. It’s not their fault. Researchers say that an... 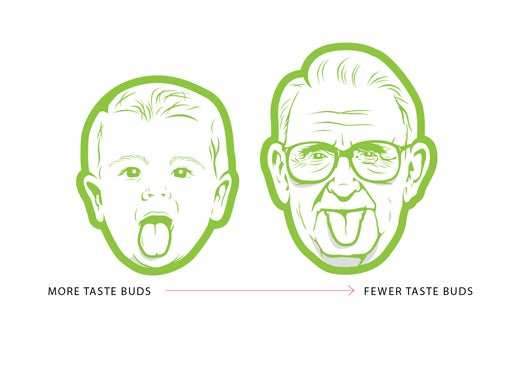 Because Brussels sprouts are bitter, and kids generally don’t like bitter tastes. It’s not their fault. Researchers say that an aversion to bitter and sour (generally a heightened gag reflex) is a survival instinct, since most toxins taste that way too. On the other hand, sweetness typically indicates that something is safe to eat, so children are born with a preference for sweets.

What we like to eat changes over time. As we age, we realize that even though something tastes bitter or sour, it won’t kill us, and we learn to enjoy it. When we’re older, we lose some of our olfactory sensitivity—we can’t smell as well. Humans need smell to experience flavor, which is different than taste (minty, for example, is a flavor but not a taste). We also lose taste buds with age. With our senses diminished, we’ll probably begin adding sugar and salt to our food, to heighten the flavor. In fact, there’s a theory that the reason many especially “big”-tasting wines in recent years have won awards is that wine critics are getting older and finding subtle flavors harder to sense.

If someone is unable to detect flavors at all, he may have a taste disorder, which can be caused by a tongue injury or brain damage. Or it could be a problem with smell. The channel that separates the mouth from the nose allows us to smell retronasally (literally, behind our nose) and is crucial for enjoying most complex flavors. That’s why food seems flavorless when we have a stuffy nose—except chicken noodle soup. It’s so salty.

Ask Us Anything
food
kids
taste