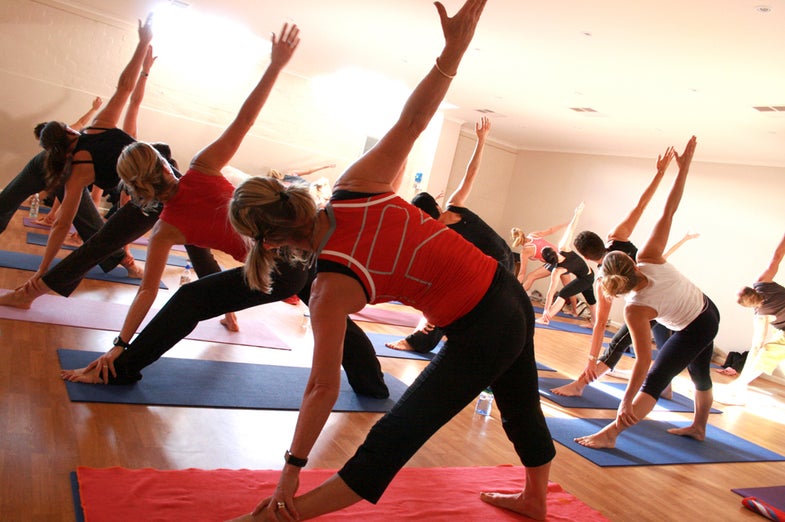 According to a new study by sex researchers at the Indiana University, women having orgasms during exercise is a real phenomenon. As far as the researchers know, this is the first study that deals directly with exercise-induced orgasms (EIO), known colloquially as “coregasms” because they tend to occur during core-strengthening workouts, like sit-ups and crunches. Coregasms began making the rounds on the internet and in women’s magazines back in 2007, when an editor at Men’s Health blogged about them. But as far back as 1953, a study by pioneering sexologist Alfred Kinsey found that 5 percent of women experienced orgasms during exercise, and that figure was likely low because the researchers hadn’t asked about EIOs specifically.

Debby Herbenick, the research scientist at Indiana University’s Center for Sexual Health Promotion who co-authored the new study, says we still don’t know how common EIOs are, but we know that they exist. The study recruited 370 women who had experienced orgasms, or sexual pleasure without orgasms, during a workout. A “sizeable minority” (44 percent) of women who had coregasms reported experiencing them 11 or more times in their lives, and most said they were able to induce the effect if they wanted.

The activities that brought on their first EIO were ab exercises (sit-ups or crunches), climbing poles or ropes, weight lifting, running, stretching, yoga, aerobics, swimming, chin-ups, pull-ups, dance, jazzercise, elliptical machine and even floor exercises. Ab workouts were by far the most common means of achieving the first coregasm: 45 percent of women reported it, versus 9 percent for climbing. And fully half of the group said they had experienced an orgasm during ab exercises in the past 90 days. Most of the women, unsurprisingly, said coregasms made them feel happy, although they also reported feeling embarrassed sometimes.

It’s too early to say exactly how exercise triggers orgasms, Herbenick says, though one theory is that pelvic and abdominal exercises put stimulating pressure on the clitoris. Increased blood flow to the vagina during a workout might also play a role. She plans to research this, as well as exercise-induced orgasms in men, who also appear to have them, though perhaps less often.

“I know what exact workout to do to achieve that feeling.”The data on women “challenges the idea that women’s orgasm is an intrinsically sexual experience,” Herbenick and her co-author, J. Dennis Fortenberry, write. “I see orgasm more as a mind/body event that we’ve perhaps taught ourselves to experience during sex, and which often occurs during sexual activities, but that also occurs in other ways,” Herbenick told me. In fact, the study cites other unusual orgasm triggers in women, including tooth brushing in people with epilepsy. If female orgasm isn’t an inherently sexual event, perhaps that explains why it’s less common than male orgasm during sex. This idea may also lend credence to the theory that female orgasm is simply a byproduct of male orgasm, something I’ve written about previously.

After talking with Herbenick, I wanted to hear from a person who had experienced exercise-induced orgasms first-hand. I emailed with a very forthcoming 19-year-old about her experiences with EIO. Were her coregasms rare? When did they first start? And could she control them? Here’s what she told me:

PopSci: When did you experience your first orgasm during exercise? What activity were you engaged in?

Interviewee: Years ago when I was in a gymnastics class in school. We were doing core-abdominal exercises and the one that I specifically remember doing was called the “candlestick.”

PS: Roughly how often has it happened since then, and during what types of exercise?

Interviewee: I couldn’t even begin to count because it is just way too many. Feeling this exciting tingly sensation was so thrilling and strange that I would practice the candlestick over and over and over again till I perfected the art of ‘coregasming.’

PS: What are your feelings about experiencing orgasms during exercise? Is it enjoyable? Have you ever felt embarrassed?

Interviewee: Because I first began orgasming from exercise at a young age, not to sound cocky, but I have perfected it! I know when my body is about to coregasm, I know what exact workout to do to achieve that feeling. I have also perfected my face so that if I do have a coregasm in the gym it doesn’t look like I am. I have never been embarrassed about coregasming at the gym because my coregasms are never unexpected or unplanned.

PS: Do you ever set out to exercise or look forward to it because you may experience an orgasm?

Interviewee: Yes. But really I don’t need exercise to get a coregasm anymore. If you told me to get one right now, within two minutes I could achieve coregasm.

PS: Do you have any thoughts on how your coregasms occur?

Interviewee: The act of tensing my muscles!

PS: Is there anything else you want to mention about orgasms during exercise or the new study?

Interviewee: Being able to coregasm has seriously helped my sex life! My boyfriend thinks its crazy that I can have multiple orgasms during sex and I truly think it is because I know my body so well. I know what muscles to tense during sex to make my orgasms stronger, longer and happen faster thanks to my early experience with coregasms.

I think it’s worthwhile to note that coregasms have made a huge, positive impact on this woman’s sex life. One benefit of learning more about exercise-induced orgasms, the researchers write, is that it could allow us to improve our sexual arousal.

For those of us who are interested in experiencing a coregasm, the most common abdominal exercise cited by the study participants involved the ‘”captain’s chair,” which consists of a rack with padded arm rests and back support that allows the legs to hang free. The exercise consists of lifting the knees toward the chest, or lifting the legs toward a ninety-degree angle with the body, often in multiple sets of 10-15 repetitions.” Thanks, science!

Jennifer Abbasi is a science and health writer and editor living in Chicago. Follow Jen on Twitter (@jenabbasi) and email her at popsi.thesexfiles@gmail.com.