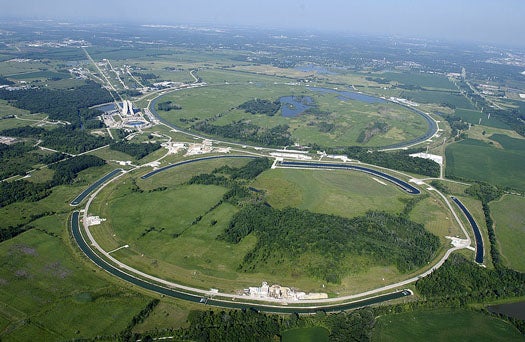 Before it stopped colliding for good, America’s defunct Tevatron collider saw a hint of the elusive Higgs boson, physicists announced Wednesday. Even more interesting: Scientists spotted something unusual in the same energy range where their European colleagues glimpsed something unusual at the Large Hadron Collider last winter.

Looking through nearly a decade of particle collision data, Tevatron researchers reported an excess of events, which is physics parlance for a promising sign of a new particle, that could be caused by a Higgs boson. The mass of this particle would be between 117 and 131 GeV. Last winter, LHC scientists reported seeing excesses in the range of 124 to 125 GeV. The Tevatron finding had a statistical significance of 2.6 sigma, which is not enough to say it’s really there, but enough to keep looking.

If they had gotten more funding, Tevatron scientists could have done that, and may have found the Higgs first, scientists told Nature News.

In December, two separate CERN teams reported signals with standard deviations of 3.6 sigma and 2.6 sigma, and in February, the CMS and ATLAS experiments again announced some promising signals. Those numbers were revised down today at the same Italian conference where the Tevatron numbers were announced. Generally, a 5 sigma confidence would be considered a true discovery.

The hunt for the Higgs boson is one of the most complicated and crucial quests in all of science. The particle is thought to endow other particles with mass, and could help explain why the universe is made of something rather than nothing. Physicists don’t even agree on what it will look like, but most seem pretty confident that the LHC will find it later this year. Nature News has the full rundown.