PopSci Q&A: Kate Findlay Talks About the Confluence of Quilting and the Large Hadron Collider We first became aware of Kate Findlay’s work thanks to Symmetry Magazine, which publishes articles relating to particle physics. Kate isn’t a particle physicist; in fact, she’s not even a scientist. She works as an art teacher at a private elementary school in the U.K., and also makes these amazing quilts. Symmetry‘s interest (and ours, and yours, we think) comes from her inspiration for one particular line of quilts: the hardware of the Large Hadron Collider. We’ve put together a gallery of her work, and also did a little Q&A with her, below.

PopSci: How long have you been making quilts? Do you work with other materials?

Kate Findlay: I have not been making quilts that long, really. My first one was in 2008, about six months before I started work on the Hadron Collider series. I have always been a painter in my spare time, mostly landscapes and still-lifes, but I work exclusively in fabric now, even when doing more pictorial pieces (like my Henley river series on my website).

PS: Where did the inspiration come from to look to the LHC?

KF: I was reading The Times in September 2008 and came across an illustrated article about the LHC. I knew about it anyway, but something just struck a chord with me and I immediately started researching online to find more images. I was very excited by what I found and knew without a shadow of doubt that this was something I wanted to develop into a body of work. (CERN gave me permission to use their photos.)

PS: What about the LHC spoke to you as regards quilt-making? Why that connection?

KF: The LHC is a remarkably beautiful machine. Its symmetry, the repeating motifs, [and] the colors were all things that I was drawn to–for any textile artist, pattern and color are top of the list and the LHC has all these! The other aspect I particularly liked was the idea of a regular circle within a square; I wanted to explore variations on this theme. Working in fabric is extremely slow and laborious, and there have been a number of occasions over the past three years when I wished I was just painting the subject. But fabric has an added dimension, its texture and sheen, which has really worked for me in making these pieces.

PS: How did you come across the LHC’s work? Were you a fan of that branch of science beforehand?

KF: I did know about it, but in a pretty general way–just what had come up in the news and through people talking about it. I have always liked science, but certainly wasn’t paying much attention to the physics of it all. That has changed with this work, and I have been reading up on the physics discoveries of the 20th century and what the current theories are, although I confess I don’t understand much of it!

PS: What is it about the LHC that you’re trying to capture in these quilts? How do you choose the colors, patterns, and techniques that go into them?

KF: When I started, I was just enjoying creating pieces that had a flavor of parts of the machine I had seen images of. As I read more, I have been trying to get some of the physics concepts into my work. One of the things that has struck me most is the aspect of scale–the huge Hadron Collider is trying to split infinitesimally small subatomic particles–to find out how our vast, vast universe is put together. So I have found aspects of astronomy creeping in to my work as well as studies of how atoms are formed and split.

The colors in my work have been very influenced by things I have seen in the CERN photos as well as using lots of metallic fabrics. More recently I have started to dye and screen print fabrics to get more subtle effects. The early pieces were mixed media: mostly fabric, but incorporating wire, card, beads, strange objects and anything else that achieved the right effect. The large quilts are more traditional in construction, being three layers, but without anything stuck on to the surface. I realized belatedly that I need to be able to roll them up to store them, as they take up a lot of room! 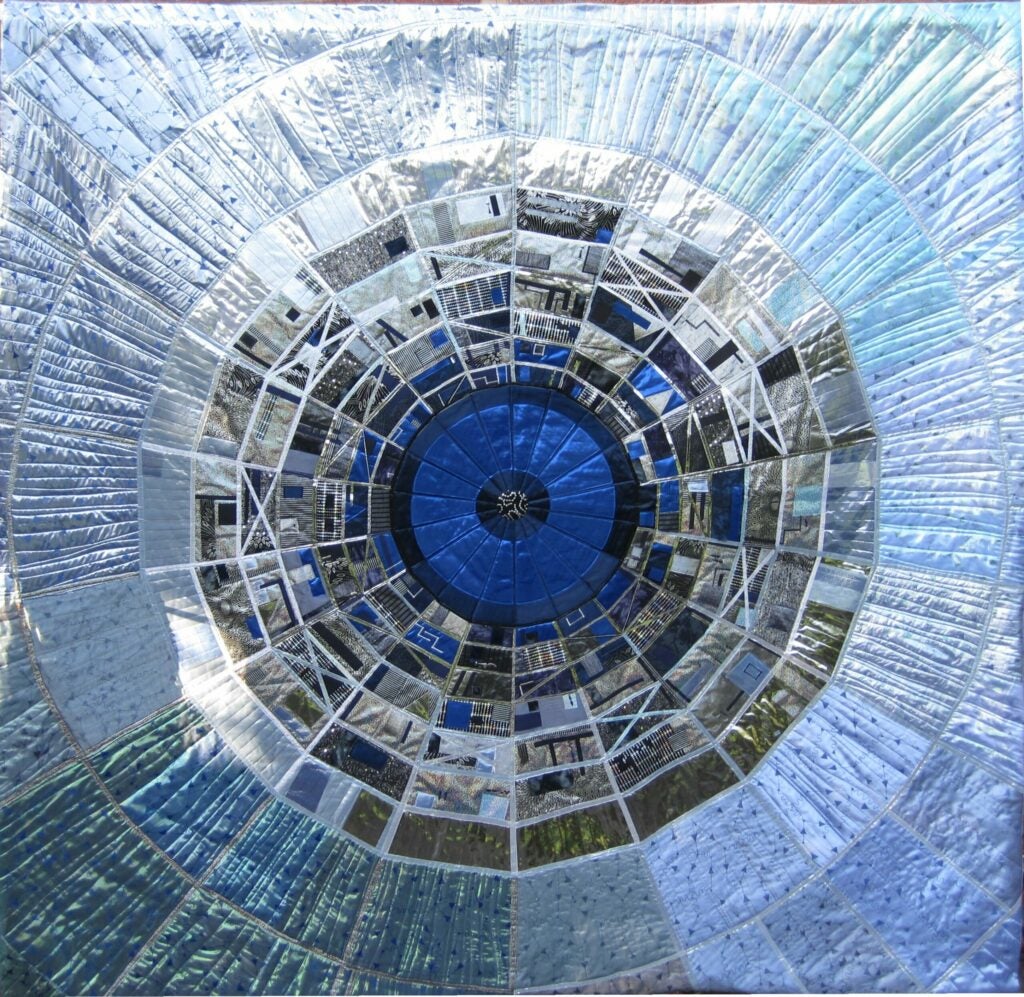 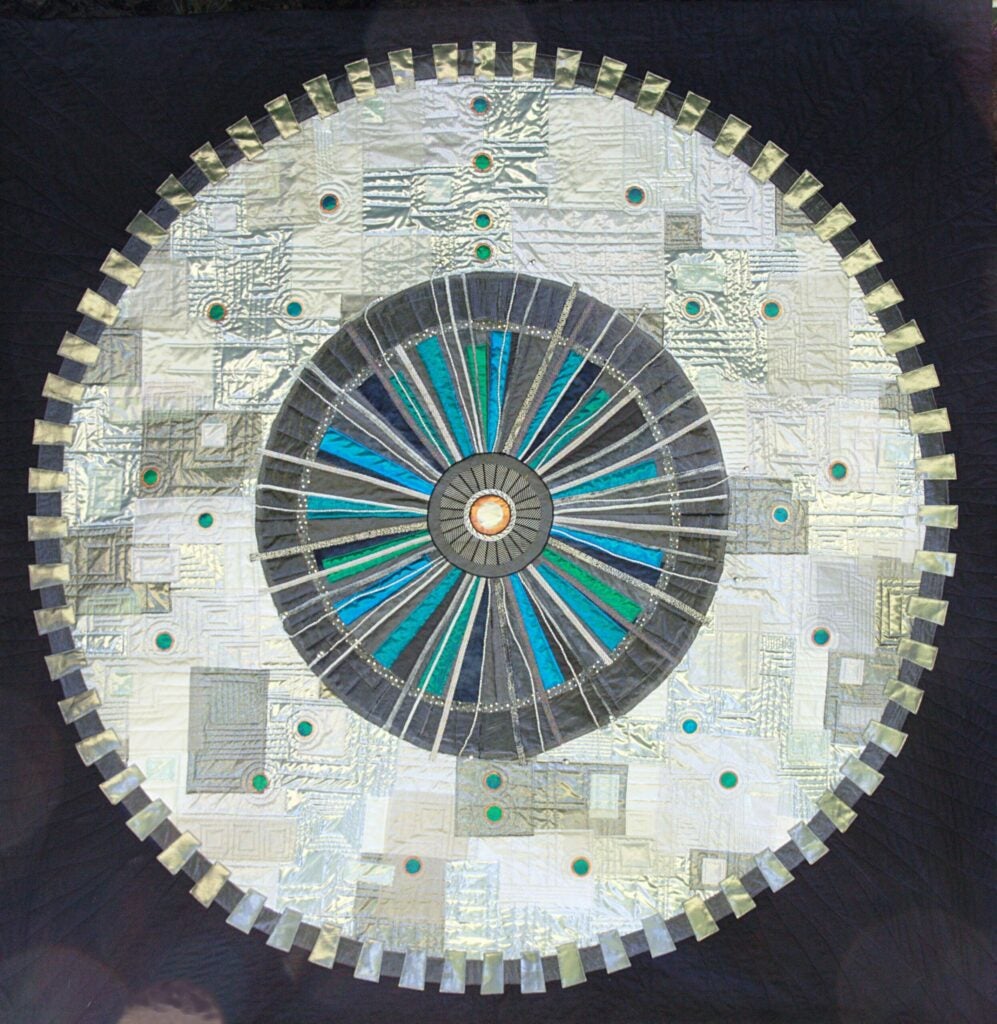 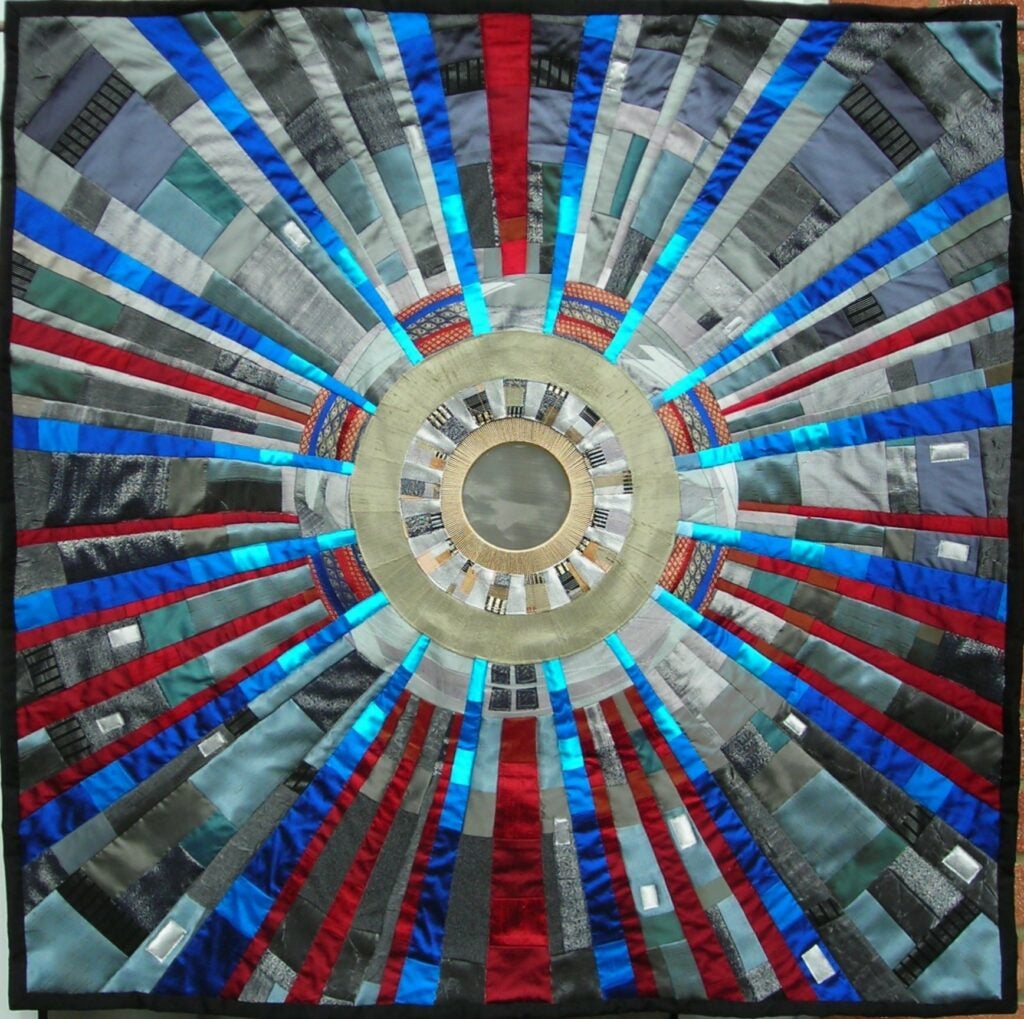 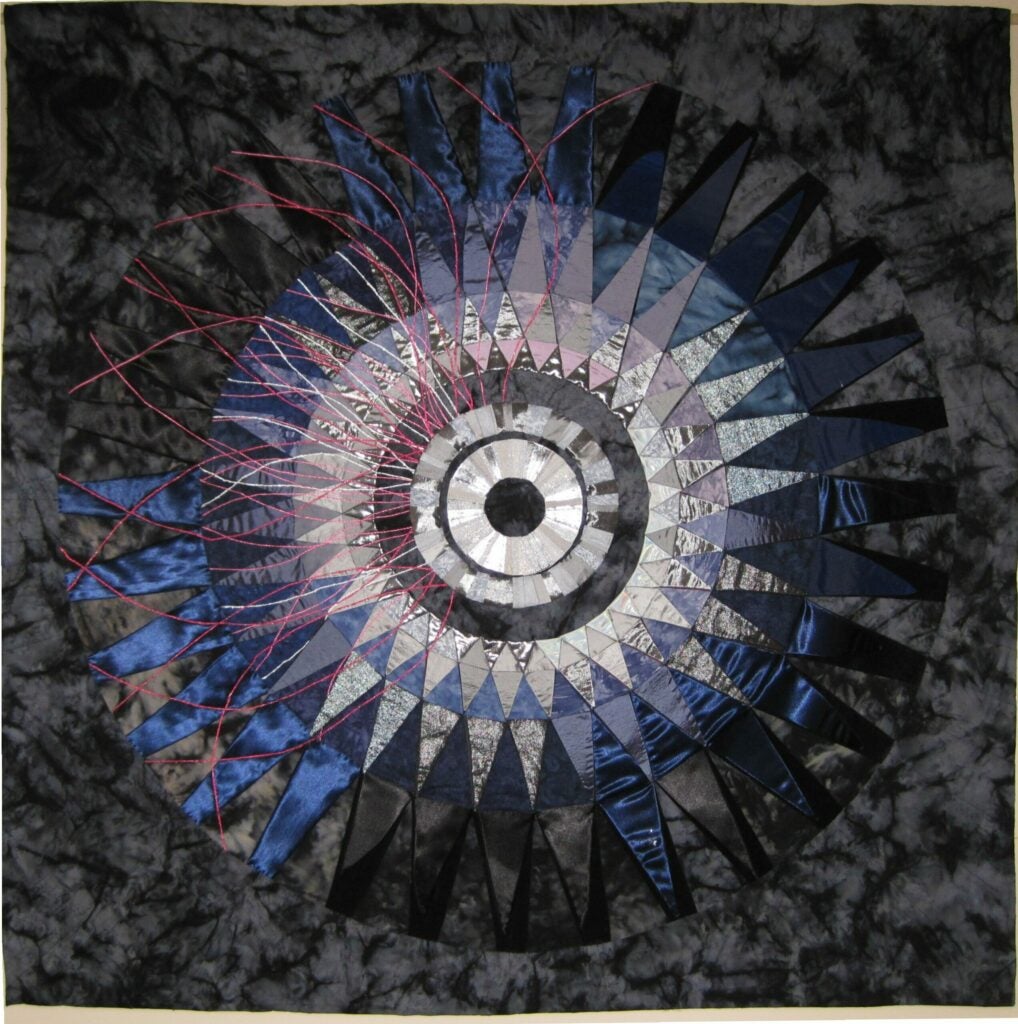 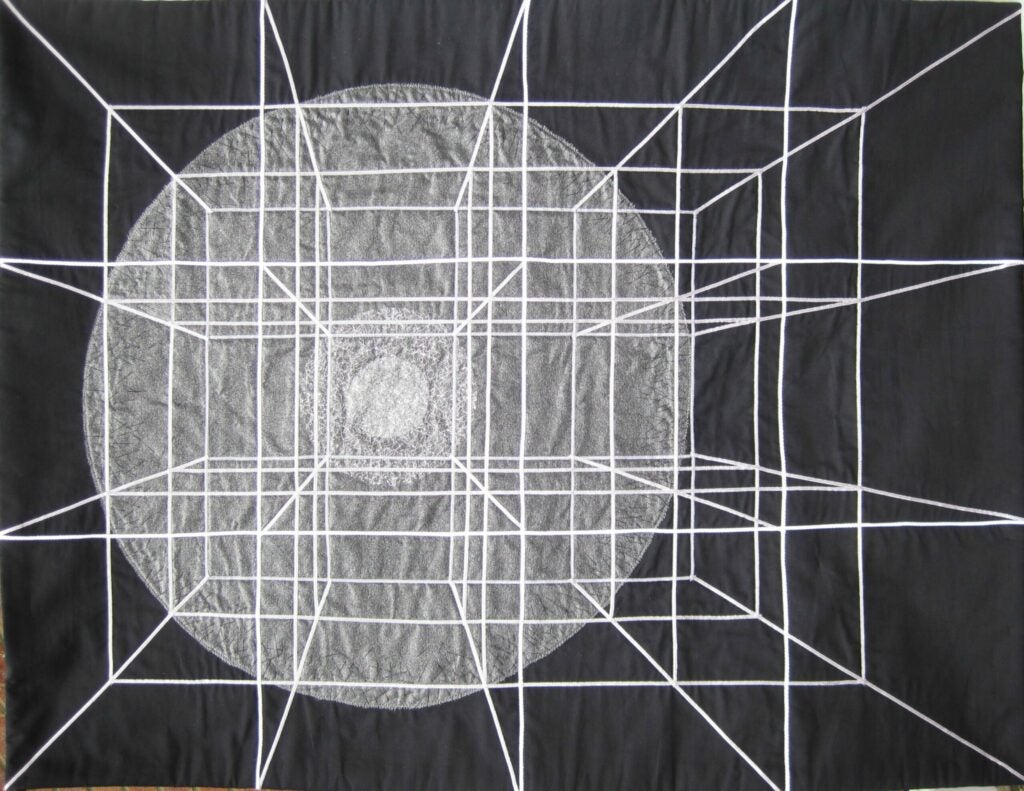 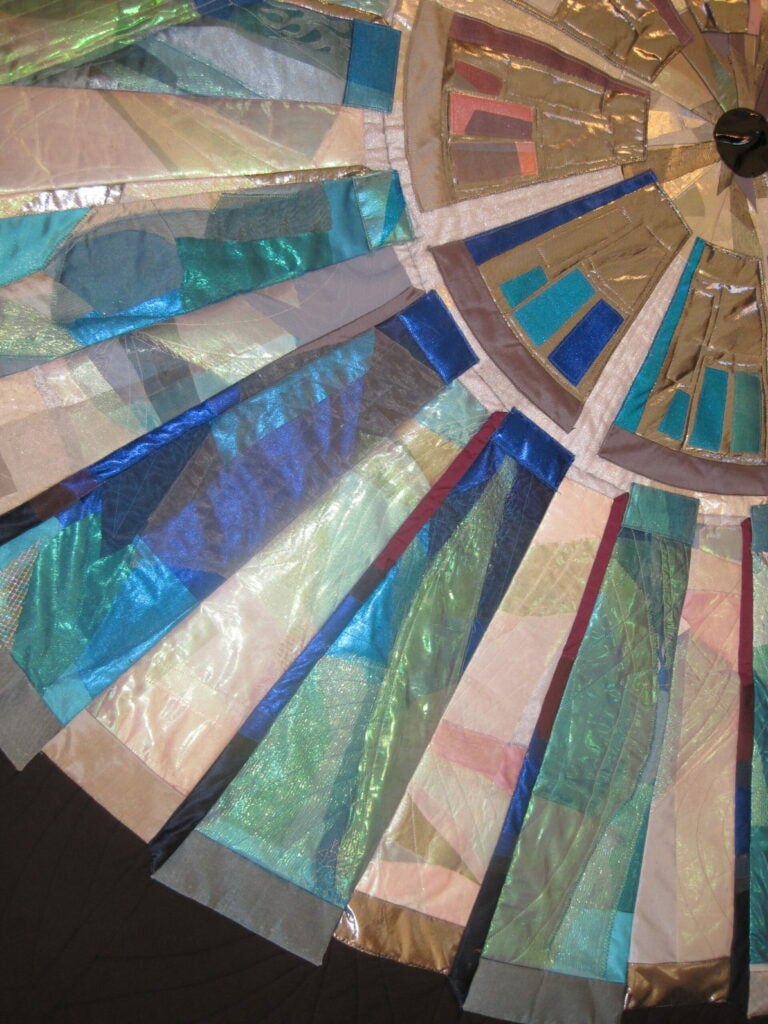 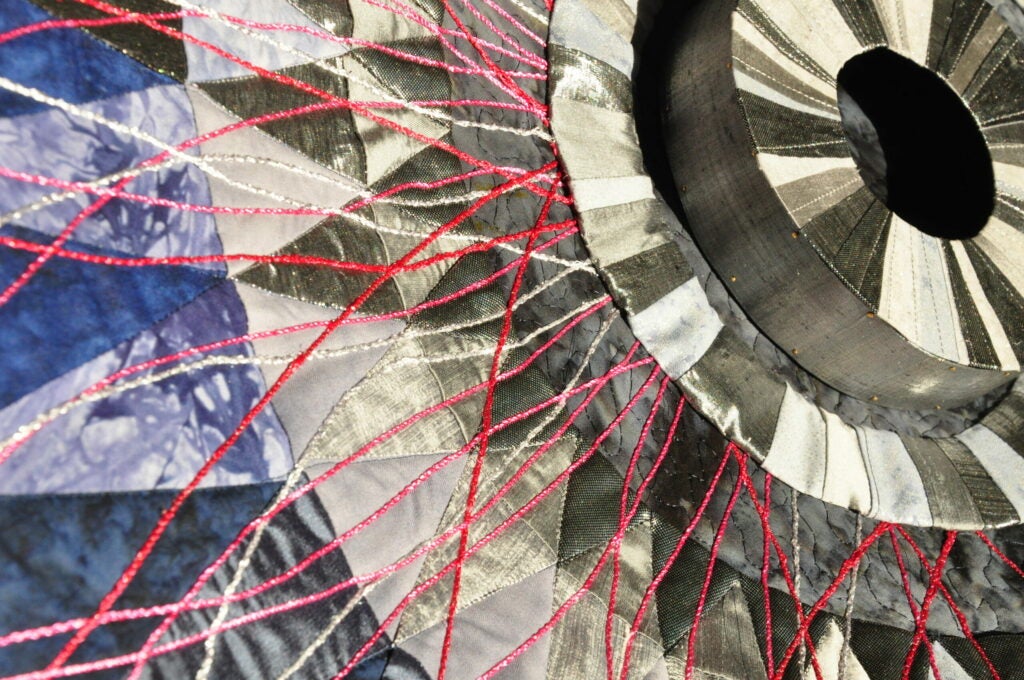 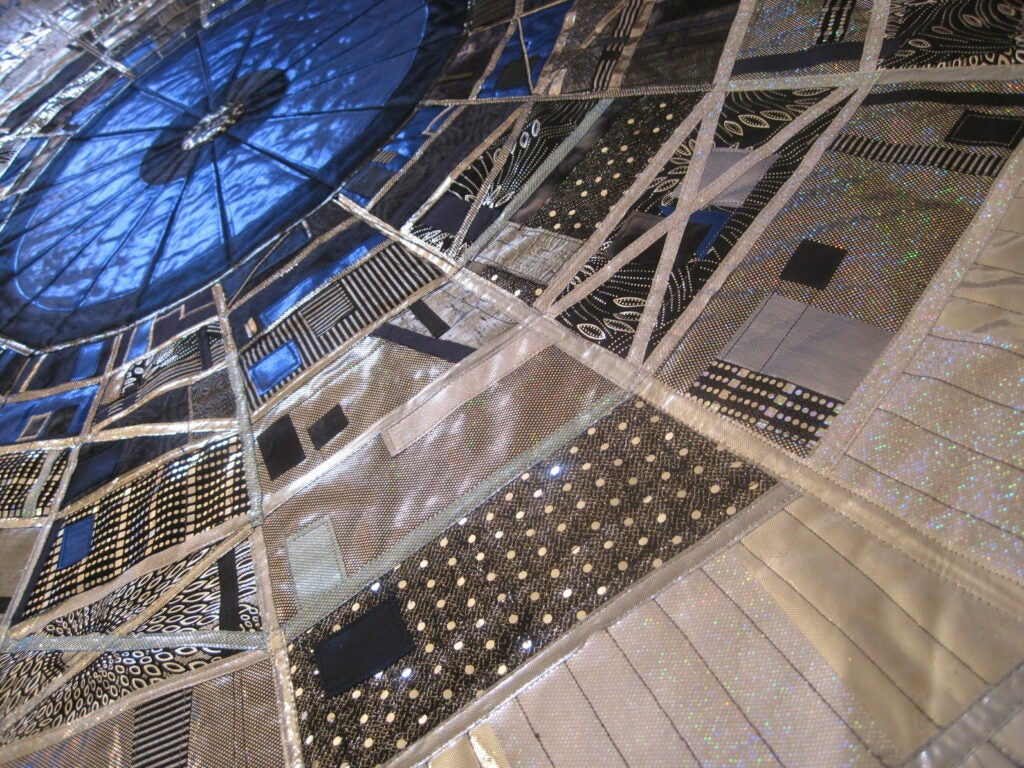 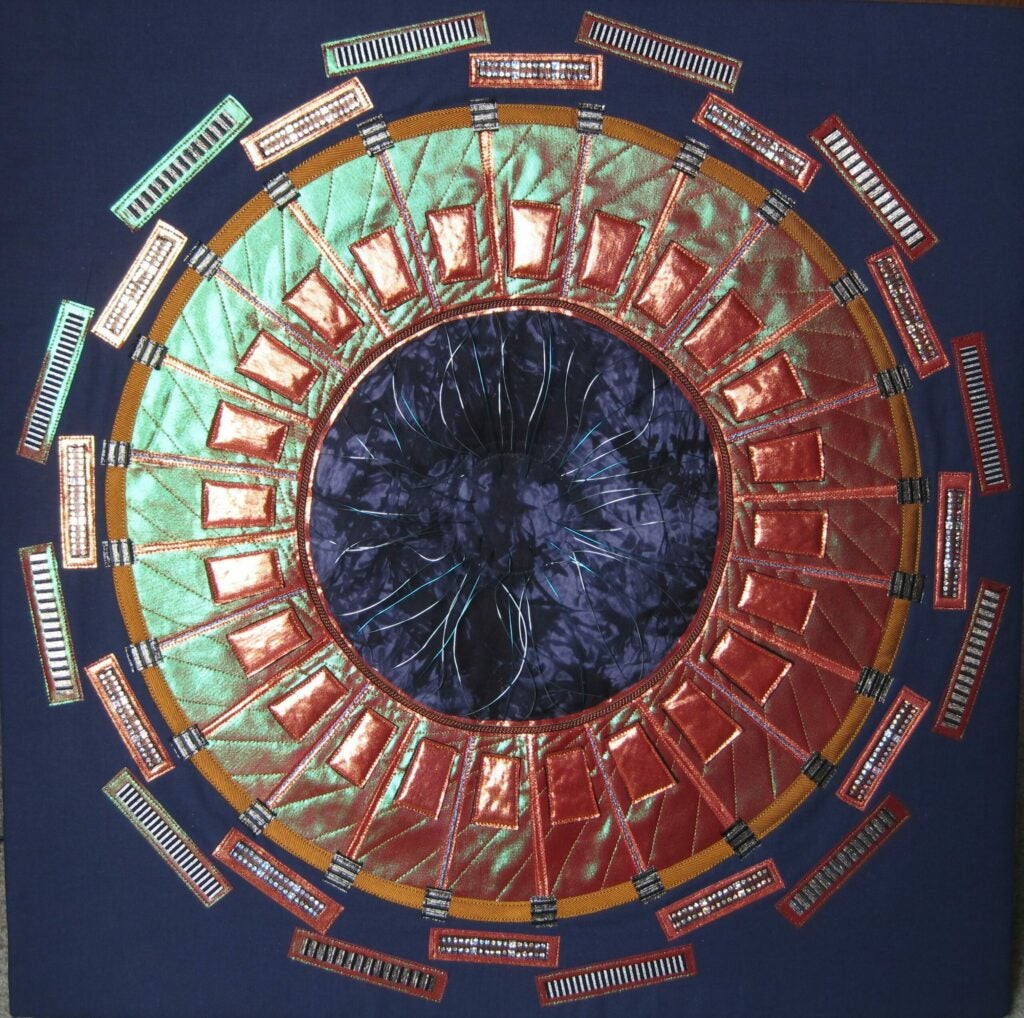 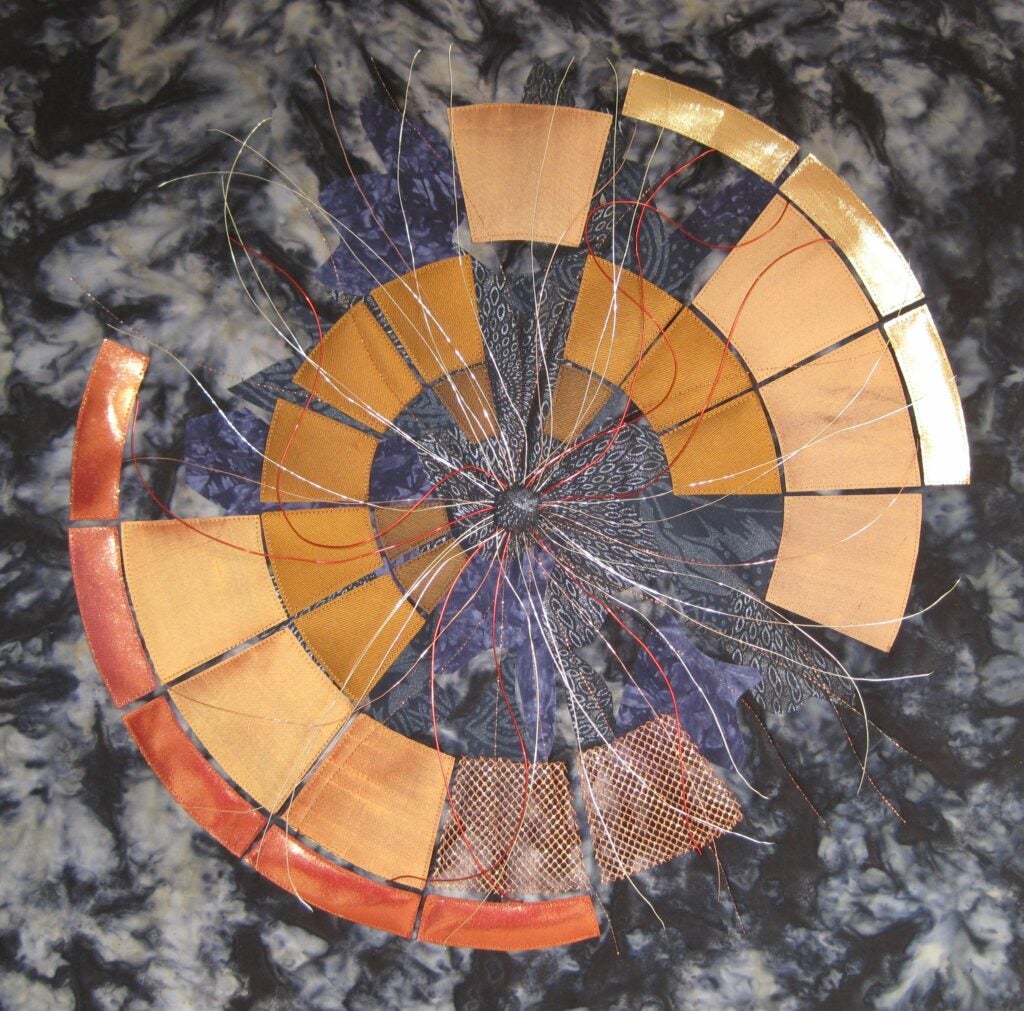 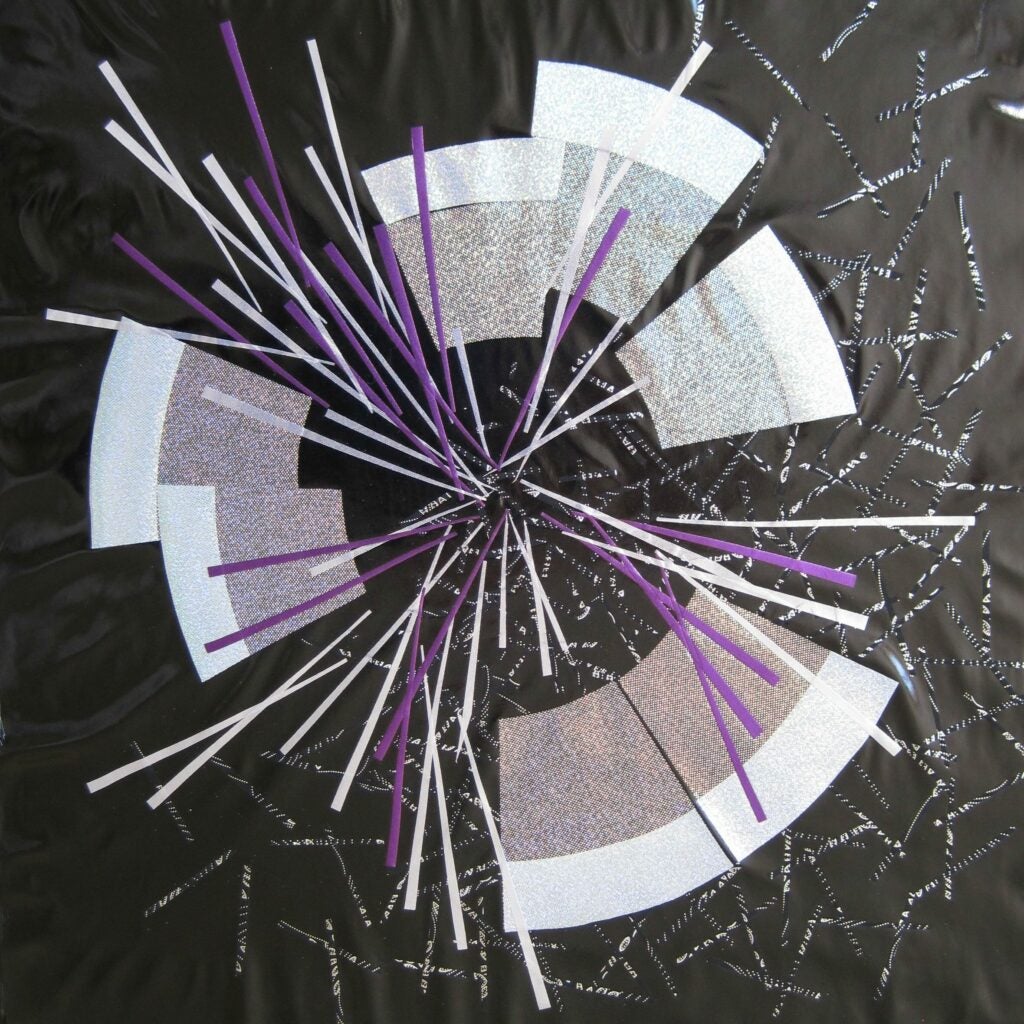 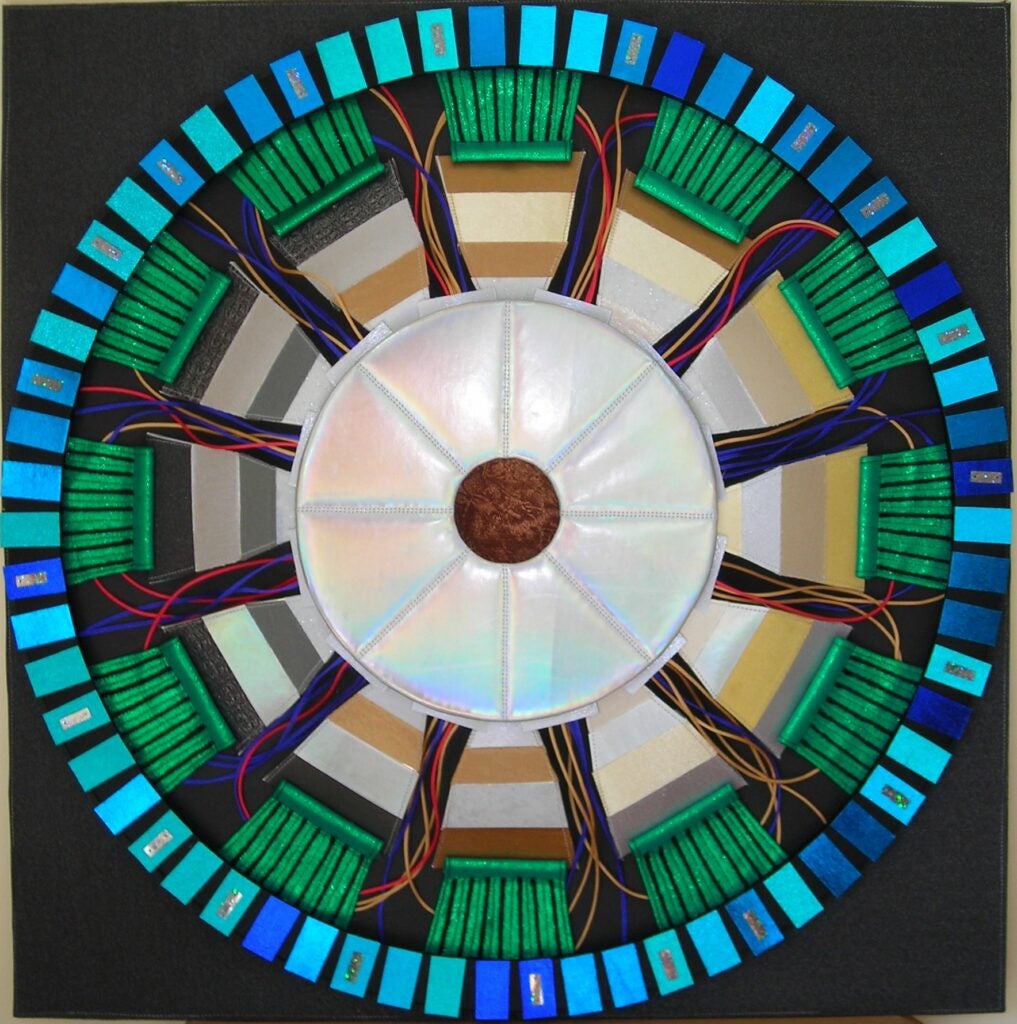 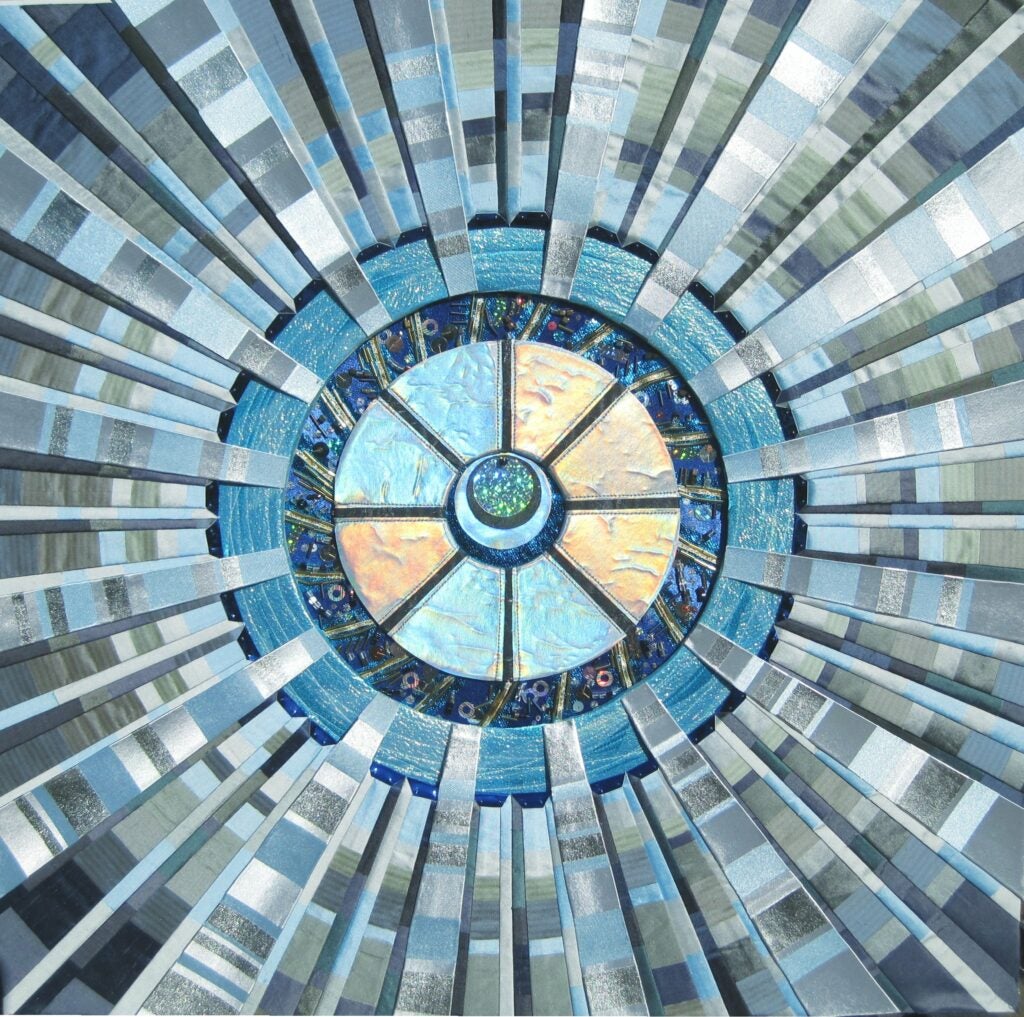