Her work could put lifelike physical feedback not just into videogames, but into online shopping and the instruments used to perform remote surgery 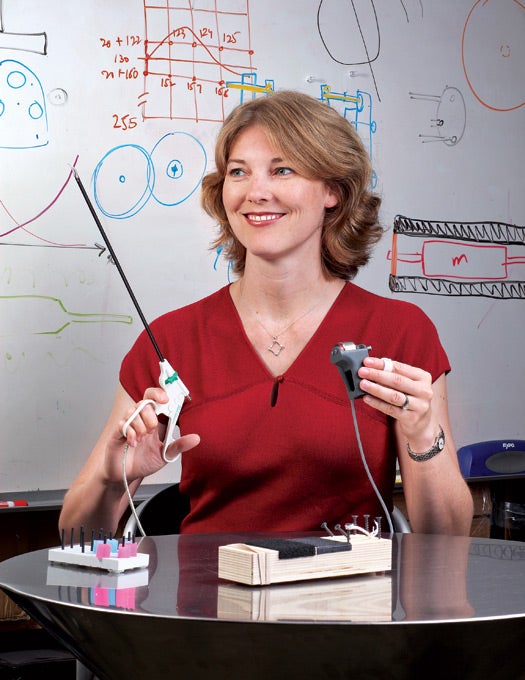 Subjects are screaming in Katherine Kuchenbecker’s lab; they feel as if they’ve been shot. Kuchenbecker is testing a vest that she and her students designed to make videogames and military training more immersive. To simulate a bullet impact, the vest launches an actuator-controlled plunger called a solenoid into the unlucky gamer’s skin where a bullet would have penetrated. “People jump out of their chairs,” she says. “Crossing that barrier from the screen to your body makes the experience so much more real.”

Kuchenbecker built her career on making things feel real. Her dream is to help make haptics, the science of incorporating touch into human-computer interaction, as convincing as photography. At the moment, however, the field is still immature. With even the best available haptic interfaces (like the Phantom system by SensAble, through which users can “touch” virtual objects), “everything feels soft and squishy,” she says. “We call it Nerf World.” To better match haptic feedback to reality’s sharp edges, Kuchenbecker captures tactile information using a tool outfitted with accelerometers and other sensors. As the tool crosses a surface, it records the forces encountered. She then creates a mathematical model of the interaction
and re-creates that interaction in a consumer product. Rather than a blunted set of Nerf-like sensations, the process gives rise to a deep tactile vocabulary.

Lifelike haptography could change medicine. Kuchenbecker’s father was a surgeon. “In my dad’s day, there wasn’t virtual surgery,” she says. “You learned by practicing on real patients. That’s risky and stressful.” But virtual surgery is still too clumsy, in Kuchenbecker’s view. Surgeons operating with the da Vinci robotic surgical system—used in place of open surgery all over the world—today receive mainly visual feedback, and only the gentlest physical response. So last year, Kuchenbecker designed VerroTouch, a device that measures the vibrations produced by touching flesh and reproduces them in da Vinci tools. Early results suggest that surgeons using VerroTouch do more delicate work.

Kuchenbecker believes haptography could someday capture the feel of archaeological artifacts, establishing a haptic “fingerprint” alongside other identifying characteristics, or could give online buyers the chance to “touch” merchandise remotely. In the end, her work could close the gap between simulation and reality for us all.