Since BP’s Deepwater Horizon rig exploded into one of the worst man-made ecological disasters in history, one big question has... 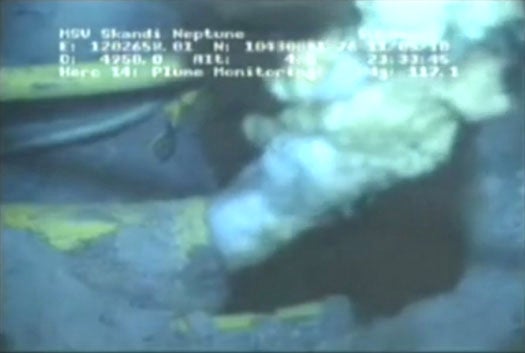 Since BP’s Deepwater Horizon rig exploded into one of the worst man-made ecological disasters in history, one big question has remained unanswered: Just how big of a mess is it? While BP asserts there’s no way to know, marine experts say that if the oil giant would but release more video from its submersible ROVs and provide a little data on the well itself, they could deduce the magnitude of the leak, as well as inform the effort to plug the leaking well pipe.

BP has already released some video of the largest of the two known leaks along the riser pipe, and that could help researchers make some kind of assessment as to just how bad things are on the seafloor.

Timothy Crane of the Lamont-Doherty Earth Observatory — an expert on natural sea-floor jets — told the Guardian a full suite of information on the leaking pipe and some additional video could give him and other researchers all they need to make an informed estimation:

“If they took about 20 or 30 seconds of video with a very specific purpose of measuring flow rates, which means having the ROV [remotely operated vehicle] stay completely still or parked on the bottom, and you got video of the plume close to the leak, and if it was illuminated and with high resolution, then you could get pretty good estimates of the flow rates.”

BP has already tried lowering a 100-ton containment dome over the leak, but hydrate crystals formed in the plume and clogged the pipe that was supposed to ferry the oil to tankers on the surface, and that effort was abandoned.

BP now wants to try to fit a smaller tube inside the larger, crushed riser pipe to siphon off the oil flowing from the leak. The idea of clogging the leak with various debris — the so-called “junk shot” — has also been considered, as has lowering a smaller containment dome. In an interview with MIT news, oil spill expert (and emeritus professor) Jerome Milgram said ideally engineers would drill a relief well, then use it to pump salt water, concrete and mud into the reservoir that will seal the leaking well. That, unfortunately, could take a while.

Of course, researchers point out, devising a solution to the problem would be a lot easier if BP and the other entities trying to stop the leak had an idea just how big the problem is. While marine and geological experts await better undersea data to work from, NASA has chipped in its overhead resources, mobilizing its Earth Resources-2 (ER-2) aircraft over the Gulf, using the plane’s Airborne Visible/Infrared Spectrometer and Cirrus Digital Camera system to collect detailed images of the slick. The space agency has also deployed satellite resources that are tracking the movement of the oil from orbit.

Meanwhile, the Deepwater Horizon Response team wants your ideas as to how to stop the flow of oil.