Stadiums will be solar-powered, to host the first air-conditioned outdoor sporting event 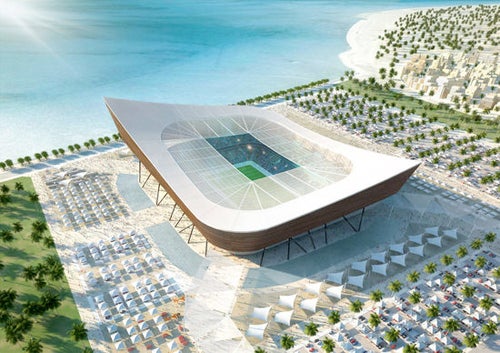 As soccer fans prepare for next month’s World Cup, 11 nations around the world are already vying for the one that starts 12 years from now. Qatar’s plans, unveiled Friday, won’t bring 3-D images of soccer action to your doorstep, but the stadiums will probably be worth visiting in person.

Qatar has five designs, each of which have different distinctive features — one has a special membrane to broadcast current match footage; one is wrapped in colorful ribbons, to symbolize the colors of each team; and another will come equipped with a pool, spa zone and shopping mall. 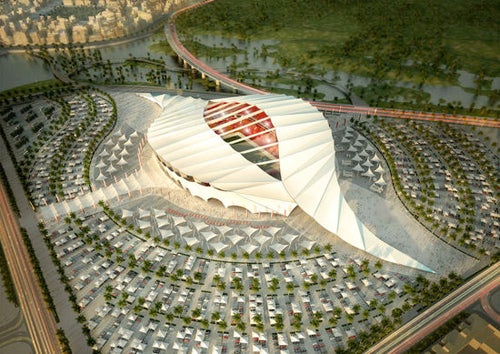 Al Khor Stadium is inspired by a seashell and looks like a giant eye. Fans will appreciate the shade of its flexible roof and landscaped gardens.

Another has an entrance linked to the Qatar-Bahrain Friendship Bridge, which will connect Qatar with its island neighbor — one more marvel of architecture in the Arab world.

Sunlight will provide most of the stadiums’ power, and they will each apparently employ a unique climate-control system that will keep temperatures below 82 degrees F, despite the desert country’s extreme heat.

The country’s bid committee has proposed that after the World Cup, some components of the stadiums will be dismantled and shipped to other countries to promote soccer — ahem — football.

Check out some video descriptions of each stadium at World Architecture News. 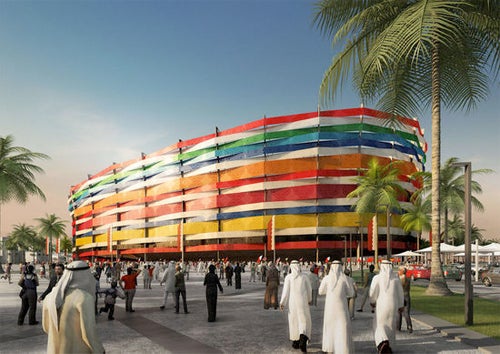 The ribbons represent the colors of all the competing teams and are meant to symbolize the “friendship, mutual tolerance and respect of the FIFA World Cup and Qatar.”
architecture
Middle East
soccer
Sports
stadiums