Reporting from the Gulf, an offshore oil rig worker finds mundanity, a complacent obsession with safety, and the doom beneath it all 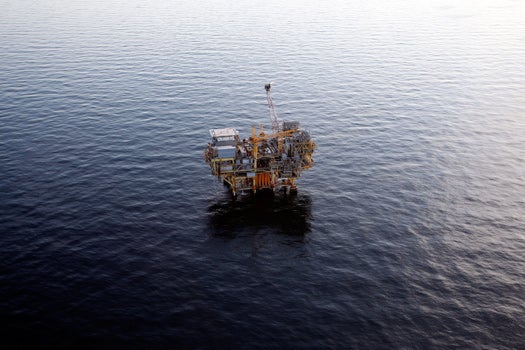 It’s a recurring dream. I’m standing next to a machine, some giant warm Fritz-Lang-inspired monster. I live in it. I am a piece of it. But I know at any moment this machine could destroy itself and there won’t be a thing I can do about it. What a mutinous thing when a machine, usually so faithful and repetitious, turns against us.

I’m afraid of this dream, and every morning I wake up in the Gulf and go to work on an offshore drilling rig the dream gets worse. Though it shouldn’t.

It shouldn’t despite the images that offshore workers email to each other with morbid curiosity, images of rig fires, helicopter crashes, accident reports of lost fingers, crushed limbs and occasional deaths from around the world. Despite even the recent events in the Gulf, I shouldn’t be afraid of where I work. And that’s part of the problem.

Along with the North Sea, the Gulf is still among the most regulated fields for offshore oil drilling in the world. The men and woman are largely conscientious of the risks involved and hyper-vigilant of safety standards when compared to similar fields off the coast of Africa and elsewhere. But even in the face of all this, when things fall apart, woo boy! They fall apart fast.

I started working offshore on oil rigs three years ago as a derrick and lifting gear inspector. I’ve worked in the North Sea, the Gulf of Mexico and off the coast of Western Africa. I didn’t grow up in a town near the Gulf or with family members employed either directly or indirectly by the industry–those families currently watching deep sea contractors move to other foreign fields because of the drilling moratorium. I didn’t know a thing about the industry, and that was why I was drawn to it. But I did learn a lot from the first day. I learned it was a lot like the second. Offshore, a lot of days feel like that first day.

Hurry up and wait. That was the first thing they taught me. Get to the heliport at 4:30 a.m. for check in at 5:00 a.m., despite the fact your flight leaves at 5:00 p.m. Drink a bottle of water then piss into a cup for your random drug screening. Wait. Listen. Wait. Watch Fox News in the waiting room. Watch a universal flight safety demonstration. Watch another, more specific flight safety demonstration for your particular model of helicopter. Put on your self-inflating life vest. Find out you watched the wrong video. Come back and watch the right video, which is suspiciously similar to the first video. Then put in your ear plugs and walk to the helicopter. Approach from the left, one man in at a time, buckle up for safety, don a pair of noise-canceling head cans. Wait. Fall asleep, because if something happens from here to the rig there is absolutely nothing you can do. If you can’t make yourself sleep then repeat this fact in your head until the vibrations of the rotors do it for you.

Because it could always be worse. Average survival time in the North Sea during winter in the event of total submersion: five minutes, with full water survival suit on. Here in the Gulf, a man can survive for a lot longer than five minutes with or without a survival suit. Think about a friend of yours who died and wonder briefly what it must have felt like crashing into the sea from 10,000 feet. The pilot’s last words, “oh fuck.” Fall asleep. Wake up. Fall asleep. Wake up. Take pictures. (Despite your growing familiarity the rigs remain visually impressive from any angle. Especially from the air.) Wonder briefly if you look completely ridiculous taking this many pictures.

Get off the helicopter. Find bags. Carry bags. Wait. Sign in. Wait. Meet medic. Wait. Find room. Wait. Go to induction meeting because this is your first time on this particular rig. While your more experienced friends head straight for their bunks, watch a universal safety video about the drilling industry in the Gulf. Watch a rig-specific safety video. Watch a safety video about this month’s special safety focus (fire). Go on a tour of the rig. Find your lifeboat. Find the galley. Find the gym. Take a test on what you learned. Find your friends. Wait. Find the person in charge. Wait. Discuss job scope. Go eat. Wait. Go to gym. Shower. Try to fall asleep. Try for me, any how; some guys sleep like babies offshore. For me though it’s all hurry up and wait, even for sleep.

Was my recurring dream worse when I was aboard the Deepwater Horizon before the explosion? No. One of the first things you see when you walk into the living quarters of a rig are safety citations, best-in-fleet awards, plaques commemorating two years without any stop time incidents, and so on. The Deepwater Horizon had a lot of awards. As an inspector, I’m an interloper on these rigs. A third-party hand. I don’t know the full story on any rig, but to a visitor like me those plaques and citations, however superficial, are comforting beyond measure.

I didn’t usually see many plaques in Africa. What I have seen are asbestos warning stickers applied to the ceiling and walls around your bunk. Three fire emergencies in one day–each one sending you scrambling to the lifeboats. In Africa, the dream is all-consuming. 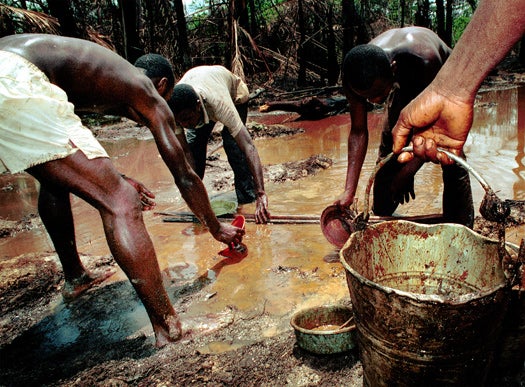 Local Nigerians attempt to clean up an oil spill with buckets in the Niger Delta, 2001

This is Africa. Where dilapidated, corroding equipment accounts for 50% of all spills in the Niger Delta because whatever cronyism and corruption in the American oil fields pales in comparison. With an infrastructure built largely between the 1960s and 1980s and minimal enforced inspections or maintenance, it’s no wonder that some (likely conservative) estimates account for upwards of 1.5 million tons of oil spilled in the Niger Delta alone since drilling began more then 50 years ago. It’s in Africa where companies can completely close facilities and yet allow them to continuously spill crude oil from abandoned wells and flow lines. It’s in Africa where I saw a 40-year-old purpose-built land rig, that anywhere else in the world would have been scrap metal, sold and propped up on pontoons to become a shallow-water drill ship. Where a small corroded hole in the main deck of the rig I was working on was circled in red, marking the brittle end of a severely fatigued piece of sheet metal that was the only thing between us and the ocean 50 feet below.

This is the oil industry that should throw us into a crazed frenzy of Greenpeace contributions, Prius ownerships and wind turbines for the roofs of our houses. Because what we see now in the Gulf, as sudden and shocking as it is, has been raging in Africa for half a century–without oversight, without government response teams, without emergency relief efforts, and without constant TV coverage and volunteer-administered toothbrush baths for the bewildered winged tarballs on our beaches.

An oil field joke: “How many years since my last stop time incident? Oh, two…two and a half” (said while holding up the three remaining fingers on your left hand, the middle digit lopped off above the first knuckle). The ladies loves it.

I don’t know what happened on the Deepwater Horizon. A few years ago, I may have been tempted to blame the men I now work with. To blame some vaguely reckless stereotype of good ol’ boy culture, hell bent on “gittin ‘r’ done” even if that “done” gets “got” with bailing wire and spit. Not to say that there aren’t more then a few in the Gulf who would be proud to call themselves good ol’ boys–this is and always has been a southern industry, with young Yankees like me a rarity. The stereotype, though, rarely matches up with reality. As for the men and woman who have been in these oil fields since they were 18 (as is often the case), whose homes in some cases face directly onto the beaches that are being besieged by oil plumes right now, it’s hard to find a fault in the seriousness with which they approach their jobs, their place in an industry and their environment. 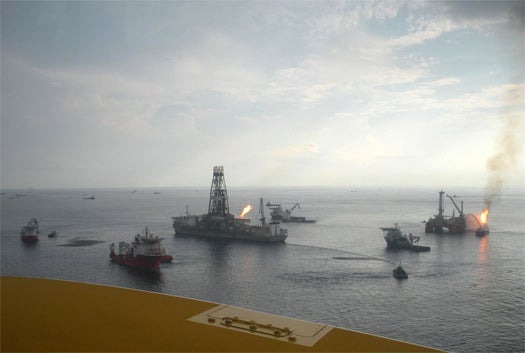 Cleanup and oil capture near the Deepwater Horizon leak site

But in many ways, something like Deepwater Horizon was inevitable. Prior to these events, the American offshore drilling environment had an incredible safety record. The kind of safety record that in pursuit of profits can sometimes blind us all to the risks involved. It’s insidious: That slow erosion of any human system stemming from ease and repetition, despite the daily reminders meant to focus everyone to the inherent omnipresent risks in what we do.

Despite the morning safety meetings, the pre-job meetings specific to your day’s task or tasks, the daily permits to work signed by the O.I.M , the “Start Cards” that need to be written everyday recording any instance in which you observed proper work procedure or prevented a possible safety violation, the “it’s everyones right to stop a job” reminders where the lowest on the totem pole can still tell the O.I.M to put on his gloves. Despite strangely obtuse signs reminding you “in the event of electrocution, please call an ambulance.” Despite automated systems apparently smart enough to automatically override user error. And despite the older men around you with their missing fingers, some deep into their 50s and 60s (age is a difficult thing to judge on an oil rig) with their stories of when regulation and the culture of safety wasn’t strangling the life out of the field.

Those things are easy to quantify, to monitor and control and in the end, receive all the attention when things go wrong. But in an industry which is both comfortably in bed with its government regulators and driven by huge operating costs, where minutes can be measured in thousands of dollars, it’s easy to see the motivation to rubber stamp some seemingly small engineering decisions, slowly degrading safety limitations, comfortable in the fact that success last time proved that a certain amount of redundancy is not always necessary. It was those small decisions, which are difficult to track and hard to monitor, that truly led to the disaster we’re watching on our televisions now.

But when this moratorium lifts and the 33 deepwater rigs return to the Gulf to resume drilling (they will as long as the oil is there), I do know that there will be even more “complacency is an enemy” speeches, reminders to check your safety gear, your tools, your surroundings, to work hard but to work safe, to hurry up and wait and to remember that at least for now you’re not in Africa.