A Slick Fix: Oil-Eating Robots Could Mop Up Ocean Disasters

When the Deepwater Horizon rig began leaking oil into the Gulf of Mexico in April, the cleanup schemes were underwhelming:... 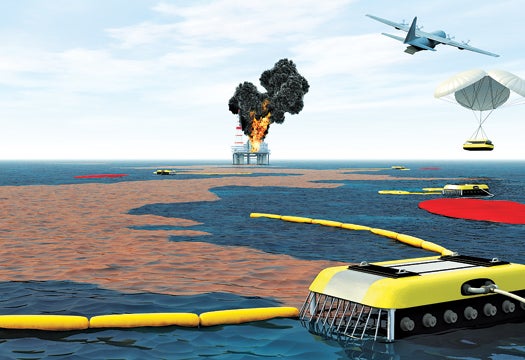 When the Deepwater Horizon rig began leaking oil into the Gulf of Mexico in April, the cleanup schemes were underwhelming: fire, dispersants, pantyhose stuffed with human hair. But a new robotic system could corral future spills in hours so that oil never hits the shore.

Aeros (Airborne Robotic Oil Spill Recovery System) is a fleet of airplane-deployed robots that cordon off the oil and use centrifuge-like oil/water separators to collect oil for refining. Each ‘bot can purify up to 3,000 gallons of water a minute.

Several could clean an 11-million-gallon, Exxon Valdez–size spill in a few days.

Global Response Group, Aeros’s developer, is building its first prototype robot to test on an experimental oil spill next year. The company is also in talks with the Chinese government to establish the first Aeros airbase, which will deploy ‘bots to protect that country’s fishing waters from offshore drilling. It will cost $800 million, a small fee compared with the billions of dollars in damage that a spill can cause.

Spills present challenges for any cleanup. “Booms don’t work well with big waves,” says oil expert Greg McCormack of the University of Texas. But the industry is eager for new strategies, he says, and will embrace Aeros if the prototype works. Aeros’s inventor, Myron Sullivan, says it will. “It needs fine-tuning,” he says, “but the technology is proven. There will be another disaster. All we can do is prepare for it.”

1. ‘Bots Away! Planes drop minivan-size water-cleaning robots and inflatable booms near the spill site.
2. Trap the Spill Once inflated, the U-shaped booms surround the oil. Robots use GPS to get behind a boom’s flap, which directs water into the ‘bot’s cleaning system.
3. Clean The robot sucks oily water into a cone that spins the liquids, sending denser water to the outside and creating a stream of oil in the center. Low pressure at one end draws oil away while the heavier—and 99 percent clean—water flows out the other side.
4. Collect the Black Gold A bladder collects the oil, which crews pick up later to recycle. One robot can clean up to 3,000 gallons of water per minute, scrubbing the affected area in just a few days.