Swarms of autonomous, solar-powered towel-bots, based on a nanowire mesh, could help those oil-eating microbes clean up the Gulf of... 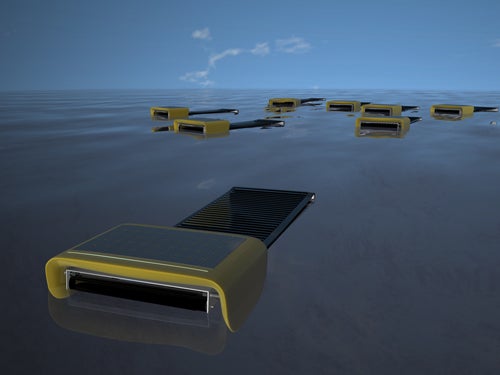 Swarms of autonomous, solar-powered towel-bots, based on a nanowire mesh, could help those oil-eating microbes clean up the Gulf of Mexico. The “Seaswarm” robot moves like a tank in water, using a conveyor belt to roll over the ocean’s surface.

The belt is made of an ultra-light nanowire mesh, patented at MIT, that can absorb up to 20 times its weight in oil. Its hydrophobic properties deflect water while sucking up various forms of pollution. The nanowire’s inventors have compared it to a paper towel for oil spills.

The belt attaches to a yellow “head” covered in photovoltaic panels, according to its designers, based at MIT’s Sense_able_ City Lab. As the robot moves head-first through the water, the conveyor belt sucks up oil, which is squeezed out into the head. As the clean part of the belt emerges from the head, the process starts over.

Seaswarm robots are intended to work as a fleet, hence the name. The robots would communicate via GPS and WiFi networks to coordinate clean-up, and they would not require human involvement, unlike current ocean skimmers. They are just 16 feet long by seven feet wide, so they would be able to access coastlines, marshes and estuaries, unlike current skimmers that attach to boats.

The design team tested their prototype in Boston’s Charles River this month and they say the conveyor belt easily adapted to the surface waves.

The robot works by detecting the edge of a spill and moving inward until it has removed the oil, the project’s Web site says. Because the robot’s head consumes the oil, the robot does not need to make repeated trips back to shore, making it a much more efficient cleaner.