Whitening the world’s roofs would offset the emissions of the world’s cars for 20 years, according to a new study... 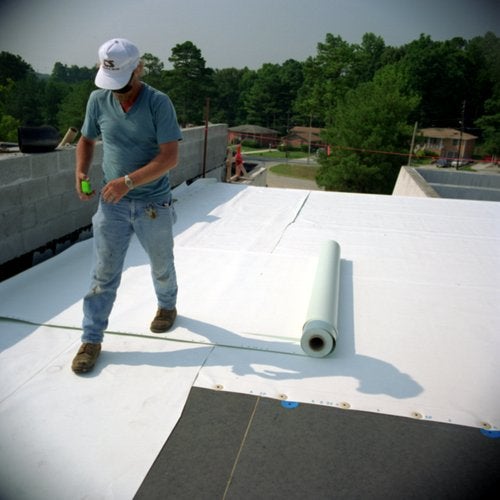 Whitening the world’s roofs would offset the emissions of the world’s cars for 20 years, according to a new study from Lawrence Berkeley National Laboratory.

Overall, installing lighter-colored roofs and pavement can cancel the heat effect of two years of global carbon dioxide emissions, Berkeley Lab says. It’s the first roof-cooling study to use a global model to examine the issue.

Lightening-up roofs and pavement can offset 57 billion metric tons of carbon dioxide, about double the amount the world emitted in 2006, the study found. It was published in the journal Environmental Research Letters.

Researchers used a conservative estimate of increased albedo, or solar reflection, suggesting that purely white roofs would be even better. They increased the albedo of all roofs by 0.25 and pavement by 0.15. That means a black roof, which has an albedo of zero, would only need to be replaced by a roof of a cooler color — which might be more feasible to implement than a snowy white roof, Berkeley Lab says.

The researchers extrapolated a roof’s CO2 offset over its average lifespan. If all roofs were converted to white or cool colors, they would offset about 24 gigatons (24 billion metric tons) of CO2, but only once. But assuming roofs last about 20 years, the researchers came up with 1.2 gigatons per year. That equates to offsetting the emissions of roughly 300 million cars, all the cars in the world, for 20 years.

Pavement and roofs cover 50 to 65 percent of urban areas, and cause a heat-island effect because they absorb so much heat. That’s why cities are significantly warmer than their surrounding rural areas. This effect makes it harder — and therefore more expensive — to keep buildings cool in the summer. Winds also move the heat into the atmosphere, causing a regional warming effect.

Energy Secretary Steven Chu, a Nobel laureate in physics (and former Berkeley Lab director), has advocated white roofs for years. He put his words into action Monday by directing all Energy Department offices to install white roofs. All newly installed roofs will be white, and black roofs might be replaced when it is cost-effective over the lifetime of the roof.

“Cool roofs are one of the quickest and lowest-cost ways we can reduce our global carbon emissions and begin the hard work of slowing climate change,” he said in a statement.