It's the Energizer Cow! 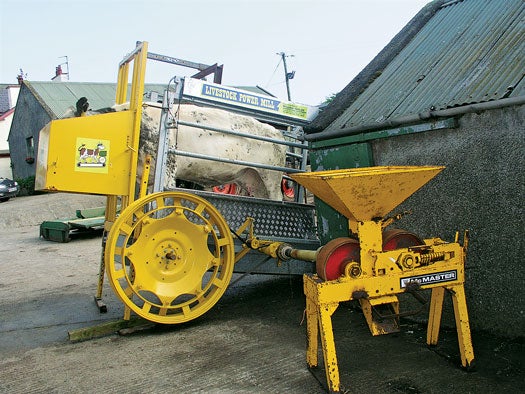 Instead of milling around aimlessly in pens, as most cows do, William Taylor’s herd is put to work. As they eat, they walk on an electricity-generating treadmill.

Taylor has invented, among other contraptions, a better manure mixer and a pen that prevents cows from kicking vets during medical procedures on his farm in Northern Ireland.

But this was his first foray into making power. Cows walk as many as eight hours a day while grazing, and one day Taylor realized that he could turn that free motion into electricity. On his Livestock Power Mill, a cow stands on a nonpowered inclined belt that the animal will slowly slide down unless it walks forward, turning the belt, which spins a gearbox to drive a generator. A feed box entices the cow to keep trekking. The one-cow prototype generates up to two kilowatts, enough to power four milking machines. A small farm could earn back a 50-cow system’s estimated $100,000 price in three years.

Some studies suggest that cows that exercise make more milk, so Taylor plans to study the system’s health benefits this fall. As a bonus, he speculates that it might cut cattle’s methane problem—cows burp up to 20 percent of the world’s emissions of this powerful greenhouse gas. Humans, he notes, tend to be more gassy if they lounge around. “Helping cows produce less methane while cranking out energy should get them better PR.”