Environmental monitoring has come a long way since the proverbial canary in the coal mine. Now we use bees. Airports... 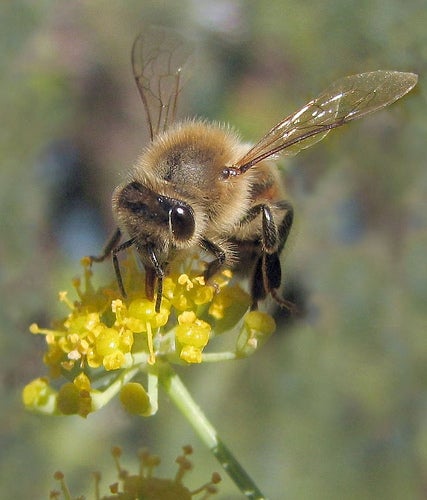 Environmental monitoring has come a long way since the proverbial canary in the coal mine. Now we use bees.

Airports in Germany are using honeybees as “biodetectives,” regularly testing their honey for a suite of pollutants, the New York Timesreports. This year’s first tests were conducted in early June at Düsseldorf International Airport, and the bees got a clean bill of health. That means the air was clean, too.

Members of a local beekeepers’ group keep the bees, and the honey, “Düsseldorf Natural,” is bottled and given away as gifts, the Times says. About 200,000 bees are involved in the Düsseldorf program; seven other German airports also work with bees.

A German lab tests honey samples twice a year and looks for compounds like hydrocarbons and heavy metals. The latest tests showed the bees’ honey was comparable to honey produced in areas with no industrial activity.

Airplane, taxi, bus and car emissions — as well as local industry — contribute to poor air quality around airports, the Times reports. Airport officials say the industry has made progress reducing pollution, but the Times quotes two studies that suggest particulates can be a problem. The Environmental Protection Agency financed an airport air-quality study set to be released soon, and one of the lead researchers says fine ultra-fine particles and lead are a potential public health concern.

Bees are one way to track those toxins because their honey would have telltale signs of pollution. If they use nectar from flowers produced by toxin-exposed plants, that would show up in the honey.

The Times quotes one honeybee expert who said the work seems promising, if inconclusive: “We all believe it can be done, but translating the results into real-world solutions or answers may be a little premature,” says Jamie Ellis, assistant professor of entomology at the Honey Bee Research and Extension Laboratory, University of Florida-Gainesville. Other experts caution that bee-monitoring should not replace traditional monitoring systems.

But at the very least, the work is a simple way for the public to understand the effects of pollution.