Just 15 minutes of cycling can produce 10 watt-hours of electricity, and earn you a free meal 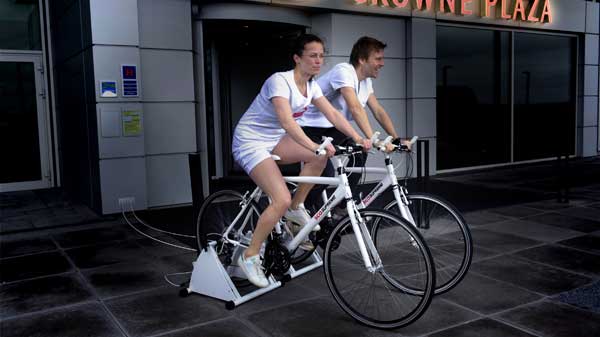 Bored guests at a certain Crowne Plaza hotel can now skip the pricey mini-bar and hop on an exercise bike, generate some electricity, and earn some meal vouchers. The hotel in Copenhagen started the free meal idea as a way to boost guests’ fitness and shrink their carbon footprint, according to the BBC.

The bikes are hooked up to generators that require guests of average fitness to pedal for about 15 minutes to create 10 watt-hours of electricity. iPhones attached to the handlebars display the amount of power being generated.

Hitting the 15-minute mark earns lucky exercisers a $36 meal voucher, and that’s presumably on a repeatable reward system. But a hotel spokeswoman said that she doubted people would exploit the initiative for free meals. Oh, Denmark … not that we’re frowning on the highly generous offer.

This hardly represents a shocking development for a nation that just can’t stop polishing its green credentials after hosting the international climate summit this past winter. About 36 percent of Copenhagen residents bike to work each day, and MIT even brought its pimped-out smart bike to Copenhagen during the summit.