Thousands of mines lurk in the oceans, and dealing with them is dangerous. 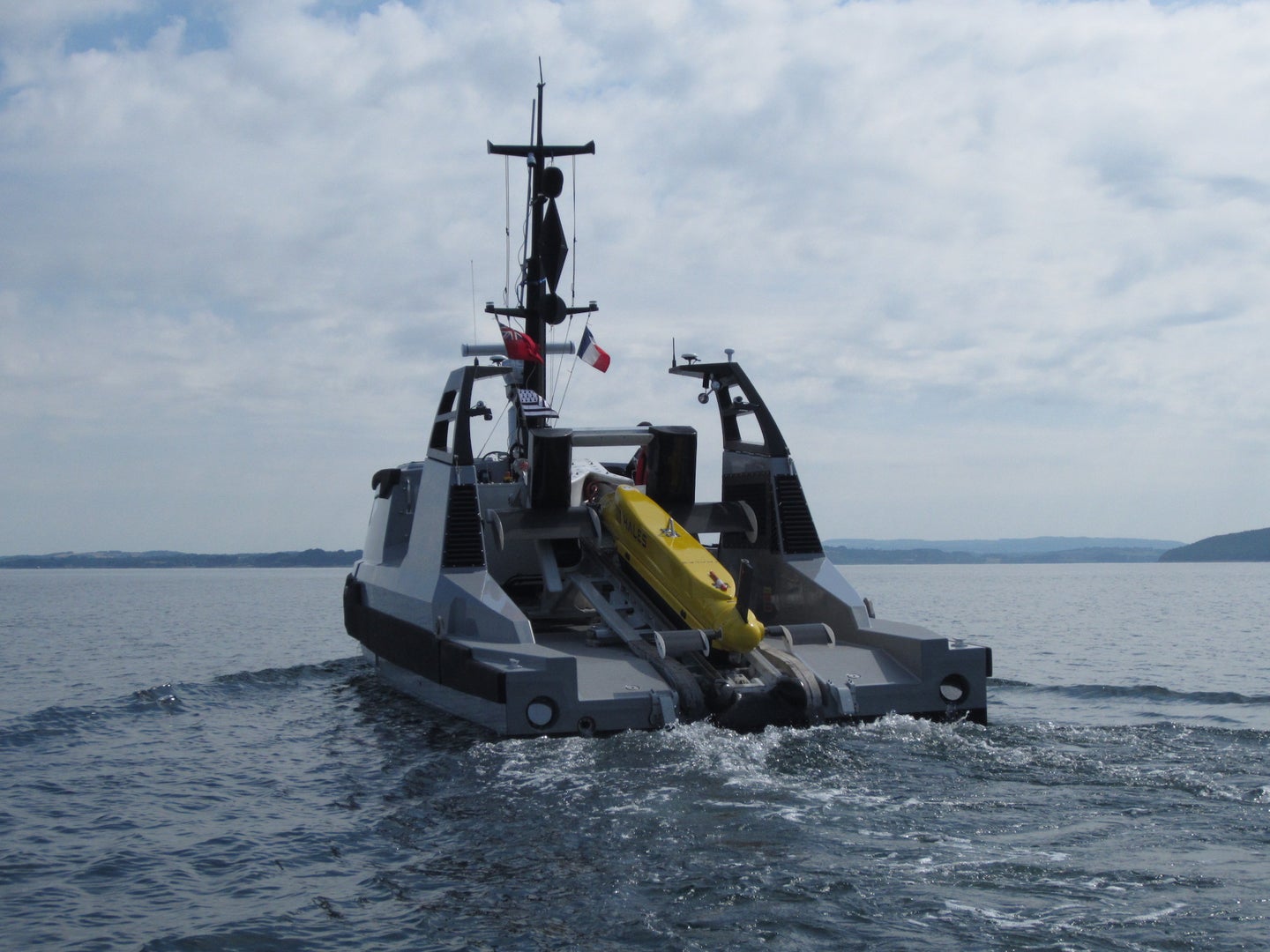 The 40-foot-long uncrewed surface vehicle and the yellow multi-shot mine neutralization system that deploys from it. Thales
SHARE

At the end of this year the French and British navies will start testing a prototype of a new anti-mine system, designed to detect, identify, and even destroy dangerous mines all while keeping humans far away from them. It’s called the Maritime Mine Counter Measures (MMCM) system, and it is being developed by French defense electronics group, Thales, and its partners.

These modern mines can be on the seabed, moored, or floating and drifting, but they’re not the only threat of their kind to shipping. Hundreds of thousands of unrecovered mines remain around Europe’s coastlines, according to Caput—they’re a dangerous legacy of both World Wars. Now 80 years old, their detonation systems are unlikely to function, but the explosive material could still cause damage. So when a mine is found, it needs to be neutralized.

Sea mines are often triggered by magnetism, so passive methods of dealing with the threat include changing ships’ magnetic signatures. Active methods include building ships specifically to find and destroy the mines: those are minesweepers and minehunters.

Minesweeping involves either dragging a wire through the water to cut the explosives’ mooring wires, or mimicking a ship to make the mines detonate. Minehunting, on the other hand, involves carefully searching an area for potential mines and then destroying them.

These operations are dangerous. Britain and France’s new mine countermeasures system, however, is intended to keep humans safe: between 14 and 35 miles away. Thales and its partners—Swedish defense company Saab, French robotic specialist ECA, and British shipbuilder ASV—won the contract from France and Britain in March of 2015 to develop it.

The system actually consists of six tools: a 40-foot-long uncrewed surface vehicle (USV); a remotely operated vehicle called the Multi-Shot Mine Neutralization System (MuMNS) that deploys from that larger surface vehicle; three uncrewed undersea vehicles (UUVs); a towed sonar; and a portable operations center in two 20-foot containers. That station is for the human operators, and can be located on land or a ship.

The first phase of a mine hunt is known, in naval terms, as “DCL.” That stands for Detection, Classification, and Location. In layperson’s terms, that means finding an object in the sea or on the seafloor, then classifying it either as a “Mine-Like-Object” (MILO) or something else (such as an old fridge or any of the multitude of objects in the ocean), and then noting its precise location with an inertial navigation system. Unlike a GPS, which gives latitude and longitude, an inertial navigation system tells you where you are in relation to the spot at which you started your journey.

This will all be done from the uncrewed surface vehicle, made by ASV, which can either be actively operated at a distance by the crew in the control center, or be pre-programed to follow a specified route. It tows a sonar that will examine the area under study. If objects of interest are seen, then the three uncrewed underwater vehicles made by French defense robot specialist ECA come into play. These are each equipped with the latest generation of sonars, called SAMDIS, and also made by Thales. The sonar units can image the object in question from three different angles, creating a useful picture. “This gives us an almost 3D image of the object,” Caput says.

The second phase is known as “IN,” for “identification and neutralization.” This is undertaken by the 4.3 ft-long, 2.6 ft-wide remotely-controlled Multi-Shot Mine Neutralization System, manufactured by Saab. It uses its two rear propellers to accurately navigate in currents up to 4.6 mph.

The MuMNS launches from the larger uncrewed surface vehicle from a cradle that tips down from the rear of the vessel. It stays permanently attached to its mothership by a fiber-optic tether that provides it with power and communications. The rover can dive to a depth of 985 feet and has six degrees of freedom.

Like the uncrewed surface vehicle, it can be piloted manually or navigate automatically to a given waypoint. Then, using its sonar and cameras, it relocates the object in question, and if the operator confirms that it is indeed a mine, they will move the MuMNS closer manually.

When it is near enough, the vehicle’s telescopic arm extends to attach an explosive charge onto the mine with a non-magnetic nail gun. This does not risk detonating the mine, explained Carl-Marcus Remén, sales director at Saab’s Underwater Systems Business Unit, “because it just gives the mine a little shake” which it will dismiss as a passing fish, for example. The charge also has a floater, like a little buoy, for radio-communication.

This charge-laying operation can be repeated twice more before the vehicle navigates back to the USV and the charges are remotely detonated using a coded radio signal that’s unique to each floater buoy. Then, boom! Ideally, the mine is destroyed, and people have remained a safe distance away the entire time.