DARPA Will Launch A 132-Foot-Long Robot Yacht In April

Uncrewed among the waves 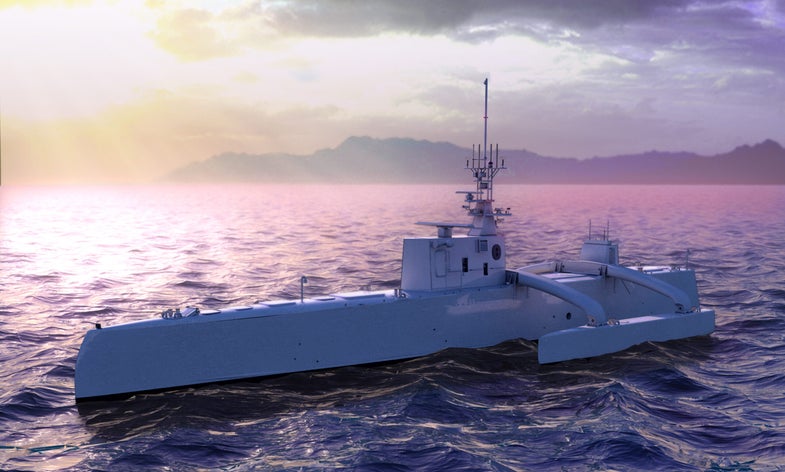 DARPA is the Pentagon’s future-looking technology projects wing, and it’s also the world’s foremost source of bad pun acronyms for military machines. Even if the President is turning down Death Stars, there’s still plenty more of the future to mine for upcoming wars. At a media roundtable in northern Virginia yesterday, DARPA director Dr. Arati Prabhakar and deputy director Dr. Steve Walker gave a glimpse of something new and strange: on April 7th, they’ll be christening a new ship that’s 132 feet long and features an onboard crew of exactly zero people.

ACTUV is built with submarine fighting in mind. “Optimized to robustly track quiet diesel electric submarines,” in DARPA’s words. There are lots of ways to hunt submarines, and no particular reason a sub hunter is better without any people on it. But why not make it unmanned? DARPA estimates using an unmanned vessel instead of a similarly-sized manned one will be save an order of magnitude on the cost of daily operation.

In addition to anti-submarine work, Walker mentioned it could have a role in supplying other ships, logistics, and countering undersea mines. This last category is currently the most common application for unmanned boats, though often they’re much smaller vessels deployed from a larger ship. ACTUV will instead be, at 132 feet long and weighing 140 tons, will be larger than most unmanned ships (though still smaller than all but the tiniest U.S. Navy vessels).

And it’ll be autonomous.

Watch a concept video about it below