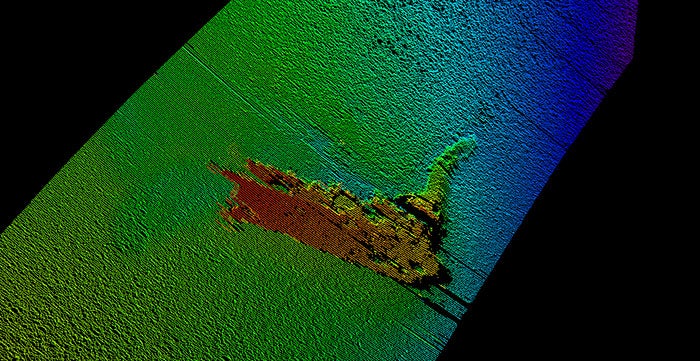 No one expected the Loch Ness expedition to actually find anything. Scotland’s famous highland lake is as known for its mythical monster ‘Nessie’ as it is for continuous, failed attempts to prove that monster’s existence. That hasn’t stopped people from searching, so The Loch Ness Project and VisitScotland worked with Norwegian company Kongsberg Maritime to survey the lakebed with an underwater robot. And then they found Nessie.

At least, they found a prop of Nessie. On the floor of the narrow lake was a prop they meant to use in the 1970 film, The Private Life of Sherlock Holmes. Except that prop sank, so they had to use a miniature in a studio instead. Here’s how the monster appeared in the film, as seen in the trailer:

To find this fake monster, Kongsberg used its Munin AUV (autonomous underwater vehicle), or sea drone. Kongsberg claims the Munin’s sonar and camera can map depths as deep at 4,900 feet in high resolution.

“We expect to uncover new information from the Loch during this survey,” Craig Wallace, an engineer at Kongsberg Maritime, said in a press release, “Merging the cutting edge technology from the commercial sector whilst maintaining the robust reliability from the military market, the vehicle is providing insight to the Loch’s depths as never before imagined. Finding Nessie was, of course, an unexpected bonus!”

The loch survey has only just begun, and it might make other discoveries still, though we’re not holding out hope for any mythological monsters.

Here it does its best Nessie impression.
Kelsey D. Atherton