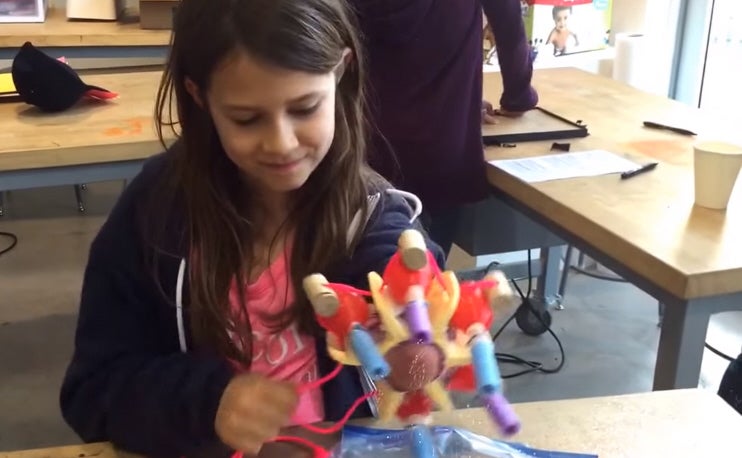 Like a muzzle-loading Minuteman, Jordan Reeves carefully loads each of the barrels of her arm cannon. Power funneled in, she returns any excess sparkles to a secure container, and then mounts her weapon on her left arm. With a knowing grin and an inventor’s glee, Reeves tugs the firing cord, and her five barrels release a cloud of glitter.

Reeves named her device “Project Unicorn,” and at its heart is a 3D-printed prosthetic that sits on her upper arm. Reeves was one of six children invited to a Superhero Cyborg program put on in San Francisco this past winter. Bay area child-centric nonprofit KidMob organized the event, and with the help of 3D designers Autodesk, they had the kids design body modifications for themselves, as superheroes.

Reeves isn’t fighting supervillains with her glitter cannons yet, but she’s in touch weekly with a mentor from the project to figure out improvements for the device. And the glitter is just the first stage. Future adaptations may turn the arm-mount into a grocery holder, or a selfie stick, or other functions as needed. There’s a lot of potential for both work and whimsy in 3D printing, and we’re only at the earliest stages of it.

Watch Project Unicorn in action below, and be sure to read the full story at FastCompany: