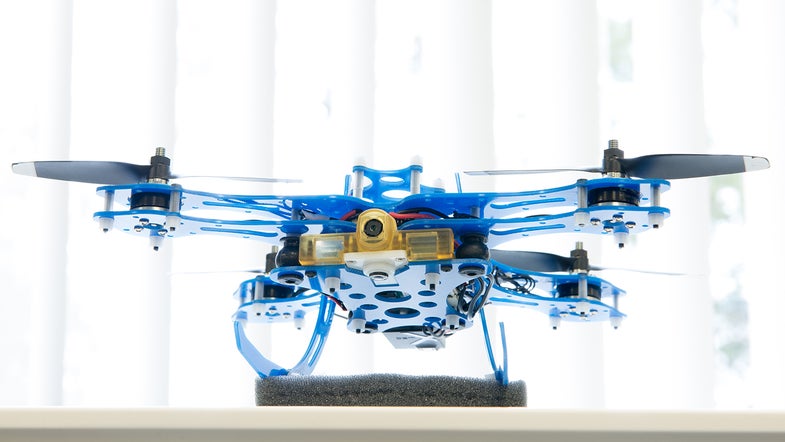 In many ways, cheap drones are just flying cellphones. They communicate using Bluetooth, are heavily dependent on battery power, and use small cameras made possible by the proliferation of cheaper, better cameras for phones.

Qualcomm makes the unsexy guts at the core of a bunch of cellphones, grouped together under their “Snapdragon” name. Now Qualcomm has a Snapdragon for drones, called Snapdragon Flight, and they’re hoping a shared and familiar processor will make it as easy to make smart drones as it’s been over the past few years to make smart phones.

“Today, drones are made from multiple component vendors providing separate solutions for photography, navigation and communications, adding to the cost and bulk of consumer drones,” said Raj Talluri, Qualcomm’s senior vice president of product management, in a press release. “The Qualcomm Snapdragon Flight brings together the technologies that have defined the mobile industry onto a single board, enabling OEMs to build drones that are lighter, smaller, easy to use and affordable with long battery life and superior functionalities.”

The features Qualcomm says its new Snapdragon will offer support for 4K video, Bluetooth Wi-Fi and satellite navigation systems, sensor support, and fast charging. This news is primarily aimed at drone-makers, though it’s not hard to see what a universal powerful support board could do for hobbyist drones. Qualcomm is already working with Yuneec, a Chinese drone manufacture that rivals the popular DJI drone family.

Another benefit from Qualcomm’s drone board is that it’s a single part for many functions, which means a smaller and lighter overall drone. Condensing cell phones moved them from a Hollywood novelty to everyday pocketable accessory. Smaller drone motherboards mean more battery power devoted to the actual flying of the drone, which could be a boon itself. As with everything drone, it just has to take off first.