The 2016 Rallye des Gazelles Is Underway 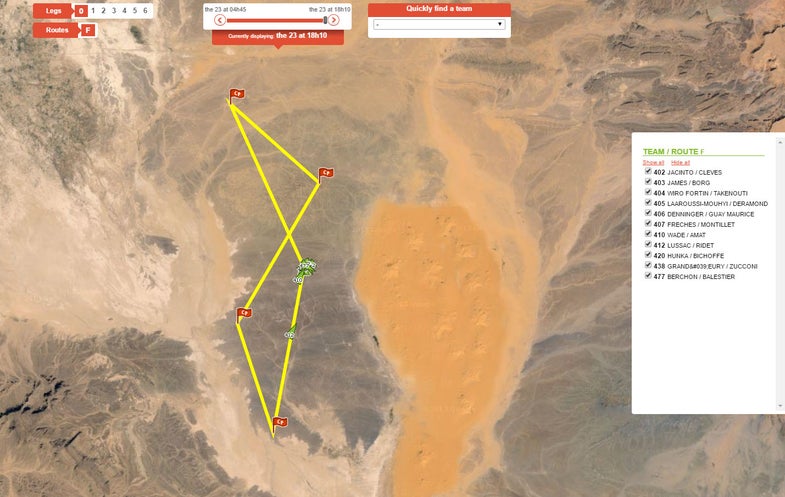 The flag has dropped on the 26th running of the Rallye Aïcha des Gazelles du Maroc, as the competition is officially known. More than 160 teams from 14 countries in 4 classes have entered the all-women’s rally, and each team has a driver and navigator, as you’d expect in any rally.

But there’s a bit of a twist in the Rallye des Gazelles: no GPS allowed. No Google Maps. No technology of any kind. The navigators use paper maps and a compass to find their way around the dunes of Morocco over the eight days of competition. The teams must decide the best way reach the checkpoints along the route, with penalties awarded for driving extra kilometers. The days start at 6 a.m., and each leg typically takes 10-13 hours to complete, though the entirely off-road route is changed each year.

“It’s a navigator’s race,” Chrissie Beavis said in an interview. Beavis, a two-time X Games medalist who can often be found in the navigator’s seat of Travis Pastrana’s Rally America Subaru, first navigated the Rallye des Gazelles in 2013, when she was teamed up with pro surfer Bethany Hamilton, and in 2015 her team won the Crossover Class. This year she’s competing with Nicole Pitell-Vaughan, cofounder of Total Chaos Fabrication, in the Automobile/Truck Class.

Just because the teams can’t use digital maps and GPS doesn’t mean spectators around the world can’t. We can all follow the action in real time on the rally’s website. The Prologue, which has 4 checkpoints over 45 km (28 miles), has already begun. For most of the teams, the Prologue is a practice round for getting accustomed to plotting routes on paper maps and shifting sands. But for the 11 teams in the Expert Class, extra kilometers count even in the Prologue.

The next six legs will count for everyone as they race to cover the least amount of ground. It’s not about speed: “The winning team is the one that drives the shortest distance,” according to rally organizers. If you see your favorite team flagging or want to congratulate the stage winners, you can send emails directly to each team from the website too.