A meticulously sculpted frequency response makes the Neat Bumblebee II USB microphone one of the most evenly balanced options for podcasting, livestreaming, and more. 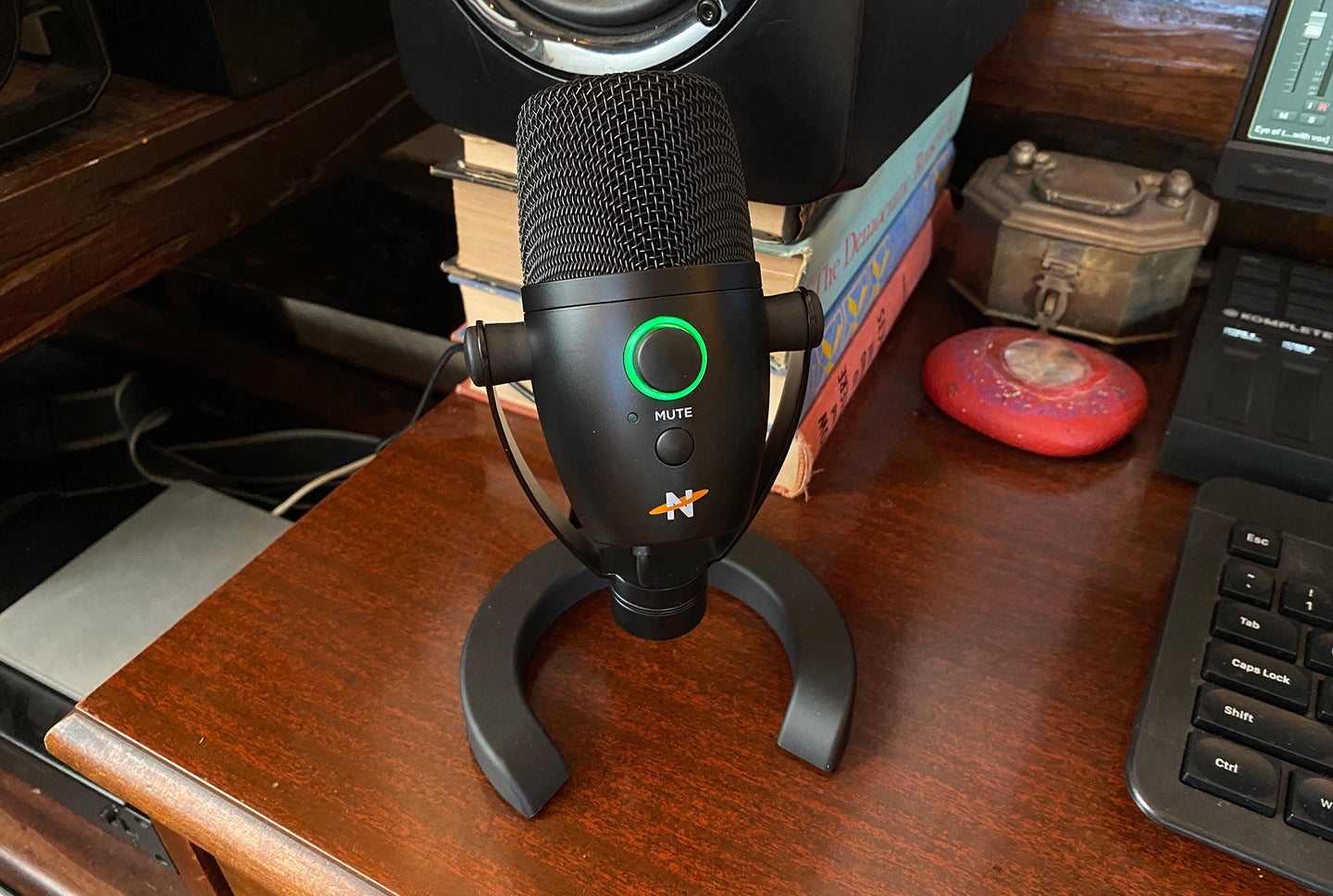 The Neat Microphones Bumblebee II USB condenser mic promises easy-to-use features and high-resolution output in a competitively priced, compactly styled package. Being both affordable and aesthetically pleasing makes it an intriguing option for podcasting, gaming, streaming, and video conferencing. But a mix of design improvements to streamline user workflow and the same internal innovations that set the original Bumblebee apart from the competition are what ultimately make the Bumblebee II stand out for content creators. Let’s take a closer look at how the Neat Bumblebee II performs on instrumental sources and manages to deliver some of the most consistent, clear, and natural vocal tones when pitted against USB microphones in the $100 price range.

While many of Neat Microphones’ products prominently feature a signature yellow-and-black color scheme matching the brand’s insect theme, the Bumblebee II mic takes a stripped-down design approach. It sports a matte black metal chassis and grill that give off a rather plain, understated impression that might make it more well-suited for use in more professional settings than the 2015 original—a distinctive golden disc perched above an obsidian slab.

The entire Bumblebee II measures only 8 inches in height, adding to its ability to fly under the radar visually. The microphone itself is permanently suspended on a metal yoke mount that feels sturdy yet easy to adjust, and the yoke is fastened to a plastic horseshoe-shaped desk stand with a soft slip-resistant base. For added flexibility, the yoke mount and microphone can be removed from the desk stand entirely and affixed to a standard boom arm or microphone stand, which is helpful for introducing the microphone to any existing broadcast setup.

The Bumblebee II features a very simple front control panel consisting of a single multifunction knob, a mute button, and a red LED mute indicator. By pressing on the control knob, users can toggle between adjusting headphone output volume, microphone recording level, and mix balance, all of which are indicated by a color-changing light ring around the knob itself. The bottom of the microphone is equally streamlined and features a single USB-C output and a 3.5mm headphone output. All in all, the Bumblebee II’s refined design is a welcome change when compared to the bulkier three-knob controls and USB-A output of the first-generation Bumblebee. Regardless of its physical overhaul, the Bumblebee II is capable of recording at the same industry-standard 24-bit/96 kHz audio resolution as its predecessor but with increased dynamic range, allowing it to produce detailed, production-quality audio files.

As a cardioid condenser microphone, the Bumblebee II features a side-address design and houses a sensitive large-diaphragm condenser capsule that’s tailored for reproducing fine sound details and smoothing out sharp transients. The internal capsule itself is expansive by USB microphone standards, measuring 25mm in diameter, which allows it to produce lower self-noise and a clearer signal when compared to something like the seemingly ubiquitous Blue Yeti’s 14mm capsule. Speaking of Blue Microphones, Neat Microphones was founded in 2014 by ​​Skipper Wise and Martins Saulespurens, the co-founders of Blue, so the company (now a subsidiary of Turtle Beach) has a serious pedigree in the mic sector.

Getting started with the Neat Bumblebee II

The Neat Bumblebee II comes fully assembled in its box, packaged alongside a quick start guide, a USB-C cable, and a microphone stand thread adapter. It doesn’t include a storage bag or case, making it necessary to keep the box and molded foam insert for travel or storage. That’s not unheard of for microphones in this price range, but it’s something to keep in mind if you’re working with limited storage space.

Setting up the Bumblebee II for recording was as easy as placing it on the desk and connecting it to my 2015 Apple MacBook Pro via USB. My computer automatically recognized the Bumblebee II and all I had to do was set the microphone to my input and output device in Apple’s Logic Pro X digital audio workstation (DAW) to begin recording. During setup, I found that the microphone’s proximity to the yoke mount offered just barely enough space to attach my KRK KNS 8400 headphones and the USB cable without crimping the connectors, which could pose problems when using headphones with more rigid connectors. After some adjusting, I found that this can be mitigated by tilting the microphone 180 degrees within the yoke mount to orient the connectors facing upward.

Even when speaking at a normal volume, the default gain settings on the Bumblebee II produced a bit of overloading and required some adjustment out of the box. I soon realized that the overloading was happening in the output stage, leaving the actual recorded audio unaffected, and I was able to simply turn the output down to alleviate the problem. One gripe I had with the microphone’s LED ring was that it doesn’t provide any visual feedback for volume or gain levels; it simply changes color depending on its operating mode. This made achieving precise adjustments more difficult and I was forced to rely on my own ears and the level indicators in my DAW to dial in the best sound.

The Neat Bumblebee II claims to offer a natural sound with full low-frequency response and I was pleased to find that it absolutely delivers on that promise. The larger-than-average capsule enables a more pronounced smoothing of the low-frequency proximity effect, making space for the microphone to produce a more engaging and realistic vocal sound that’s less prone to changing even when users shift positions. Aiding this response is a sensitivity of 16.0 mV/Pa at 1 kHz, signal-to-noise ratio of 80 dB-A, and a dynamic range of 114 dB.

I first tested it on my voice and found that it captured an immediately detectable warmth and intimacy that lacked any of the brittle highs that so often plague budget condenser microphones. According to its official frequency response curve, the Bumblebee II features prominent sensitivity in the 30-40 Hz range that adds audible fullness to its sound when compared to a microphone like the Blue Yeti, which tapers off steadily below 200 Hz. The Bumblebee II also features a more heavily scooped midrange than the Blue Yeti (or the Blue Yeti X), which helps it skirt around a lot of the common boxiness to which vocal recordings are prone.

One of the shortcomings of the Bumblebee II compared to a direct competitor like the Blue Yeti, however, is its single pickup pattern. While the Yeti’s five switchable pickup patterns, including figure-of-eight and omnidirectional, allow users to capture a wide palette of sound variations, the Bumblebee II is locked to a unidirectional cardioid polar pattern. This makes it less useful for recording sources apart from a single performer and somewhat limits its creative versatility as a recording tool. However, as a potential new addition to the best podcast microphones, as well as the best mics for streaming, it can excel.

In addition, the Bumblebee II’s extended lows, shaped midrange, and gently sculpted highs should allow it to excel theoretically at recording other musical instruments, so I followed up my vocal test with acoustic guitar and electric guitar recordings to see how it might fare in a music production setting. Each of these instruments recorded very well through the microphone, which captured no shortage of full, detailed low-end information. However, while I found that the Bumblebee II painted a very realistic and balanced picture of the acoustic guitar, the electric guitar recording lacked some of the punch and presence I prefer and required EQ for fine-tuning.

It should be noted that, like even the best condenser microphones, the Bumblebee II is prone to picking up a fair amount of ambient room noise that can sound distracting at best and unpleasant at worst. In my experience, however, the Bumblebee II suffered less from this phenomenon than the Blue Yeti and I suspect that this is due to the Bumblebee II’s meticulously tailored response that maneuvers around common problem-causing frequencies in the midrange and highs. Still, if working in a significantly echoey room, a less-sensitive dynamic USB microphone like the Samson Q9U may be a better choice for capturing a more focused and sterile vocal tone.

So, who should buy the Neat Bumblebee II?

When stacked up against the best USB microphones in the price range that I’ve tested, the Neat Bumblebee II delivers an astonishing depth, clarity, and warmth. Thanks to its sculpted frequency response and large capsule, the microphone offers excellent value for content creators who might prefer a natural and true-to-life vocal sound to a traditionally compressed and top-heavy broadcast sound. If you’re a musician willing to bump your budget up to $200 you can get the Neat Microphones King Bee II, which features a more studio-centric XLR-based design and a flatter, more versatile frequency response (check out our complete thoughts on that model and, if you’re sure which one is right for your project, read our guide to testing microphones). But, while this cardioid mic does have a few interface quirks and design limitations that are reflective of its affordable price point, the Bumblebee II is hands-down one of the best-sounding, best-performing $100 USB condenser microphones currently available.