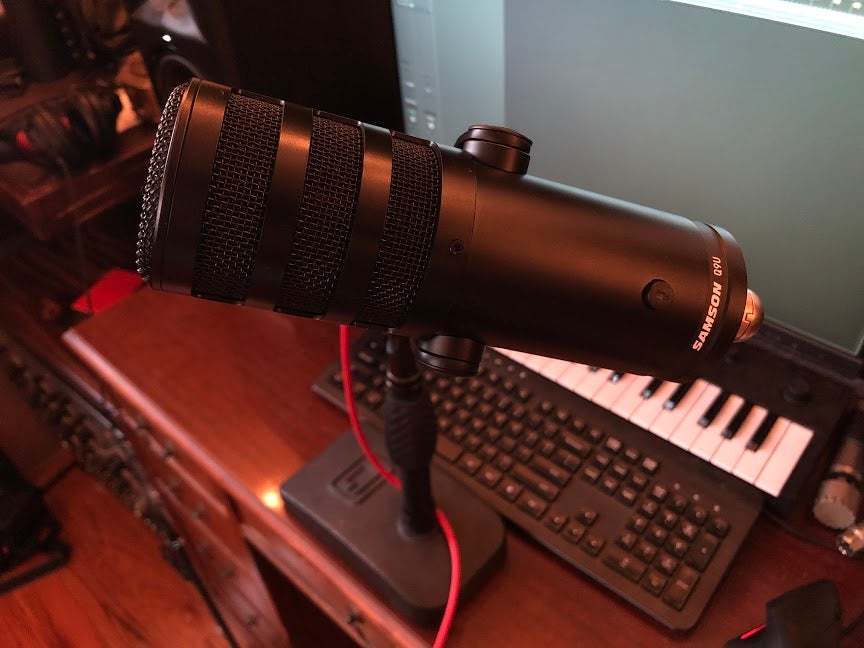 The Samson Q9U is a broadcast microphone offering simplified audio production to streamers, podcasters, and recording engineers. With a robust chassis containing features such as switchable equalization, built-in analog-to-digital conversion, and a dedicated zero-latency 3.5mm headphone output, the Q9U is an all-in-one USB/XLR microphone that allows creators of every skill level to capture high-quality audio from simple voiceovers to loud guitar amps without the need for anything other than a computer. Whether you’re a streamer looking to add to your production value, a podcaster on the go recording interviews, or a musician in need of a versatile studio microphone, this Samson mic should be on your short list of capable candidates.

Straight out of the box, the Samson Q9U’s black die-cast metal housing gave me a strong impression of durability and a premium feel in the hand. The 2.1-pound $199 Samson Q9U microphone feels sturdier than its 1.2-pound direct competitor the $250 Shure MV7 broadcast mic (see our full review here); it comes across much closer to the installation-quality build of the ubiquitous $400 Shure SM7B (reviewed here). While this extra weight adds some peace of mind in the event of an odd, accidental drop or normal wear and tear, users should mount the Q9U on a spring-loaded boom arm or another sturdy microphone stand that’s able to handle the microphone’s mass to make sure it suffers more fingerprints than scuffs and dings.

Much like other popular broadcast mics, the Samson Q9U mounts on its own built-in threaded yoke, which allows for easy pivoting and angle correction while mounted on a stand. And thanks to an internal shock mount and metal the microphone is also resistant to handling noise, which makes it a particularly good choice for streamers and broadcasters who want to make adjustments on the fly without sacrificing sound quality. Within its housing, the Samson Q9U holds a dynamic humbucking coil with a frequency response of 50Hz-20kHz and the capability of capturing sources in excess of 140 dB—roughly the volume of most fireworks and definitely beyond the range of the human voice. This means that, beyond capturing speech or singing, it’s theoretically a great candidate for placing on drums, guitar amps, and other loud sources, so easy handling is a plus.

On the rear of the microphone are two small, clearly marked switches for adjusting the mic’s frequency response, a USB-C port for direct digital recording to a computer, an analog XLR output for interfacing with compatible audio equipment, and a headphone output for latency-free monitoring while in USB mode. In USB mode, the Samson Q9U acts as its own audio interface, offering 24-bit/96kHz analog-to-digital conversion and several front-end equalization options without the need for extra software or equipment. There are a lot of great podcast microphones out there, but these features help the Samson Q9U compete.

Getting started with the Samson microphone

The Samson Q9U microphone is for plug-and-play operation, whether you’re using its XLR or USB output. Using the included USB-C cable, I first plugged the Q9U into my laptop and then plugged a pair of headphones into the rear of the microphone, through which I was immediately able to hear my voice. I then opened Logic Pro, set the Samson Q9U as my input and output device, and just like that, I was ready to record.

Immediately, I noticed that the Q9U’s lack of onboard volume controls makes it necessary to do all level adjustments using the DAW software. While adjusting input sensitivity is relatively easy, there’s a very real limit on the headphone output level this microphone delivers. In a voiceover studio or a streaming and broadcast environment this might not be an issue, but it’s definitely not enough volume for monitoring if you’re recording loud music.

The Samson Q9U’s plug-and-play design is arguably its greatest asset, eliminating any need for complicated software installations or lengthy setups and teardowns in the studio. Compared to its more basic sibling the $70 Samson Q2U, the user-friendly Q9U also has a host of onboard equalization and vocal enhancement switches accessible directly from its rear panel alongside its I/O. These controls are clearly marked and make obvious alterations to the sound, so custom-tailoring your sound is quick and easy regardless of your skill level. My only small gripe with the rear controls is that they’re not visible to the user while the mic is in use, so unless you’ve memorized each switch’s location, you need to pivot the mic or physically move your body to gain access.

The controls themselves include a low-frequency cut to add clarity and headroom to bass-heavy voices, as well as a mid-boost that enhances the most prominent frequencies of the human voice and renders a more polished, production-ready sound. Both these options allow users to sculpt and adjust the microphone’s frequency response on a case-by-case basis depending on the voice of the speaker, which ultimately cuts down on editing time by capturing a clearer vocal sound from the start. These switches, along with an easy-to-access mute button, make the Samson Q9U an ideal choice for production environments that require on-the-fly adjustments to sound.

Unlike USB-only mics, the Q9U’s ability to function as a standard analog microphone makes it a much more versatile choice that won’t paint you into a corner when it’s time to expand your recording setup. This extra functionality also eliminates the need for buying separate dedicated microphones when workflow demands change. For example, you can use the Q9U in XLR mode while working in a permanent, furnished studio, then pack it up and produce content on the road using USB mode and a laptop.

To test both USB and XLR modes, I recorded a few vocal samples, as well as acoustic and electric guitar samples, in my untreated home studio. The Q9U has a cardioid, or “heart-shaped” pickup pattern, with focused sensitivity in the front of the mic and relatively good rejection of sound at the sides and rear. Overall, I liked the Q9U’s level of clarity and recording volume on vocals through USB using its default settings. Engaging the rear switches for low cut and midrange boost, my vocal tone became even clearer and a lot of the muddiness that one might typically remove in post disappeared completely. On acoustic and electric guitar, the Q9U didn’t perform as well, struggling to translate the guitar’s complex low-end information and biting transients in a detailed manner. I was slightly disappointed but not surprised, considering the Q9U is primarily for broadcast, streaming, and other vocal use.

The recorded sound of the Samson Q9U microphone changed very subtly when I used it as an XLR mic and connected it to my Universal Audio Apollo interface. This is likely due to the use of the external interface’s own analog-to-digital conversion rather than the converters inside the microphone, and the end results felt a touch bit more detailed on the high-frequency end. While this is mildly interesting to note in the context of a gear test and a good thing to keep in mind, this small difference between USB and XLR mode probably won’t make a noticeable difference in sound quality or viability in the long run.

Absent a remarkably high voice, most users will need to speak into the Q9U at Samson’s recommended distance of 4 to 12 inches to ensure that the resulting vocal sound is not boxy or boomy. Compared to the Shure MV7 and other mics designed for broadcast use, the Q9U exhibits a relatively high level of proximity effect, which is a fancy term for exaggerated low-frequency response at close proximity to the sound source. Many streamers, broadcasters, interviewees, musicians, and others who frequently use microphones might need to adjust from their familiar position to accommodate this. Editors and producers may additionally find that the Q9U picks up relatively more background noise and reverberation as a result of users sitting further back from the mic, which can pose problems in spaces that lack acoustic treatment.

So, who should buy the Samson Q9U broadcast microphone?

The Samson Q9U is a great value for content creators of every skill level and studios of every size. Its industry-standard mounting design, durable casing, and XLR output make it appropriate for large-scale professional use, plus its competitive price makes it a good option for outfitting a broadcast studio with multiple microphones. Its USB mode is so easy to use that the microphone is a reliable choice for home or mobile laptop recordings, just keep in mind that the headphone output has limited headroom and can’t be heard in loud environments—say, when recording a guitar amp or a live show. If you want a broadcast mic more suited for recording instruments in addition to vocals, look at something like the Shure SM7B. But if you’re primarily looking at the best podcast microphones and streaming microphones with some versatility, the Samson Q9U is an excellent dynamic microphone for capturing voiceovers.