Blue Microphones Yeti vs. Yeti X: Which Blue podcasting mic should you buy?

Here’s how to decide between two versions of one of the most trusted USB mics for podcasting and streaming. 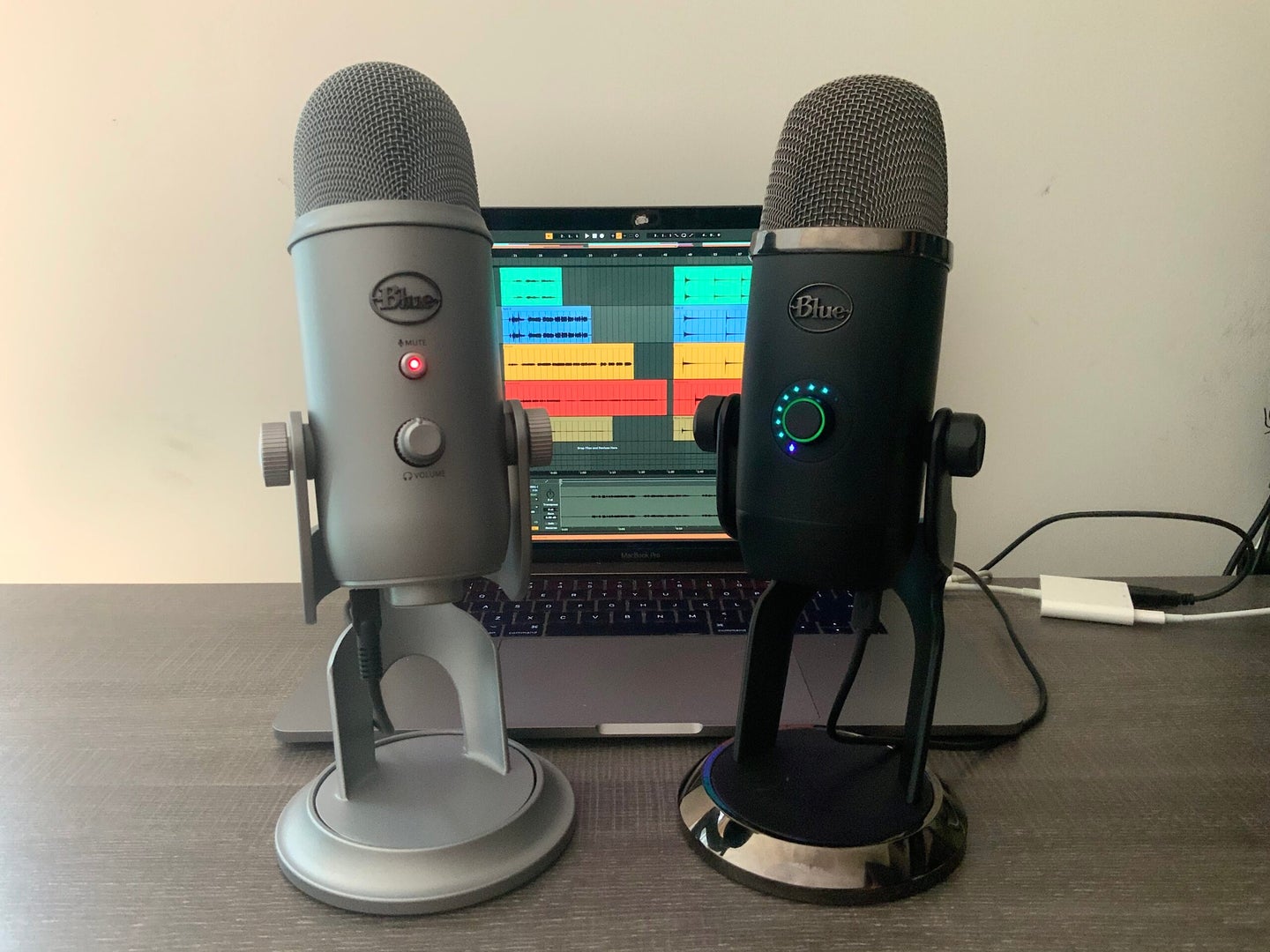 Way before there were dozens of companies making hundreds of USB microphones, Blue Microphones introduced the Yeti in 2009 and it held a legitimate claim to being among the best USB podcast microphone for some time. With increasing competition, the Blue Yeti had to evolve, and the latest iteration, the Yeti X, can claim to be more expressive…for a price. But just how wide is this generation gap? If you’re searching for the best microphone for whatever your project is and you’ve narrowed it down to Blue Yeti mics, chances are you’re comparing the classic to the new hotness, so here’s our Yeti vs. Yeti X primer to help you decide.

Is something wrong with the original Blue Yeti mic? Why another version?

The Blue Yeti USB microphone ($109.99) originally launched as a “premium” USB microphone aimed at pro, semi-pro, and aspiring broadcasters, singers, and musicians. At that time, many USB mics looked like novelty designs and lacked professional features and audio quality of broadcaster standards like the Shure SM7B. The Yeti raised the bar for USB microphone quality and became one of the most popular models in the world for years.

Since then, however, the USB mic landscape has exploded with professional options matching or exceeding the Yeti. Blue has kept pace by introducing a series of Yeti USB mics for various needs. The $79.99 Yeti Nano, for example, is a smaller mic with fewer options, while the $249.99 Yeti Pro adds musician-focused features such as an XLR audio connection and 24-bit/192kHz studio-grade audio resolution.

While those are targeted for specific use cases, the $169.99 Yeti X is the closest thing to an updated and improved version of the original Blue Yeti USB microphone. The Yeti X improves the audio quality, updates the design, and adds some extra features while also keeping the same basic operational and connectivity features as the Yeti. But the original Yeti is still a great, user-friendly option for a new streamer or podcaster who wants a plug-and-play, reliable USB microphone with a proven sound. There’s nothing wrong with the original, so the pertinent questions for potential buyers are whether they want the Yeti X’s extra features, and if so, are they worth the extra $60? Let’s discuss…

Yeti vs. Yeti X microphones: What are the differences?

Blue won critical acclaim when it introduced the Yeti X in 2020, as the update adds a little bump to everything its best-selling predecessor does. The Yeti X steps up its digital audio resolution to 24-bit/48kHz, compared to 16-bit/48kHz for the Yeti. In theory, that higher bit depth represents a massive increase in captured digital data to more accurately recreate sounds. In practice, many people may not notice the difference in the audio quality, and many users may not even need or use the extra audio resolution in their streams, podcasts, and other broadcasts.

Perhaps the most noticeable difference visual is the multicolor, multifunction LED ring around the Yeti X’s level encoder/mute button on its front. By default, these LEDs show the mic’s input level meter in green, yellow, and red, so you can see right away if your levels are too hot. The encoder also controls the levels for the microphone input, headphone volume, and monitoring balance between the mic volume and computer volume. Holding the mute button switches between level modes and the LEDs show the levels as you turn the encoder. This Yeti X functionality gives you all your level controls in front, whereas the Yeti has a headphone volume knob in front and a microphone input level knob in back. Besides looking cooler, the Yeti X’s LED ring gives you the extra monitoring balance function, which the Yeti doesn’t have.

Finally, the Yeti X gives you extra options when paired with the included Logitech G Hub desktop software. Using G Hub you can customize the Yeti X’s LED ring colors, and apply “Blue VO!CE” vocal effects, which are EQ settings for treating your voice with presets—including “Warm and Vintage,” “Crisp and Modern,” and “AM Radio”—or dialing in your own settings.

Cool, then how are the Yeti and Yeti X similar?

Both mics are USB-powered and can detach from their stands to be mounted on standard mic stands or boom arms. Detaching the Yeti from its stand can send several small, easily lost washers in all directions, and those parts also make reattaching the Yeti to its stand somewhat of a hassle. Thankfully, the Yeti X’s design doesn’t use any of those washers, so detaching and reattaching it to and from its stand makes for a better experience.

Both mics are also very sensitive in picking up sounds and have the same four pickup patterns—internal settings that focus the mic’s audio capture to specific areas in front, behind, or all around it. These four patterns are: cardioid (in front), most common for a single person talking or singing; omnidirectional (360 degrees), best for representing the entire ambience of a space; bi-directional (front and back), ideal for two people sitting across from each other; and stereo, which creates a wide audio image and is well suited to recording instruments or multiple sound sources in front of the mic. On the Yeti, the Pattern control for choosing these pickup patterns (a dial) is a bit stiff to switch, but the Yeti X employs a better button switch with LED icons for showing the active pattern.

Once set up, the original Yeti earned its esteemed reputation for its combination of crisp, strong, detailed sound with a sturdy and durable metal design and professional looks. It also has a headphone output, which lets you monitor the mic’s input with no latency while listening to your computer’s audio—an excellent and very handy feature. The Yeti X has all those traits as well, with the aforementioned audio-quality boosts.

Is the improved sound quality of the Yeti X really noticeable?

Note: If you want the full audio resolution from the Yeti X, you may have to dig into your recording software or streaming software settings to use the 24-bit/48kHz resolution.

With all that said, untrained listeners frequently do not notice the difference between 16-bit audio and high-resolution (higher than 16-bit) audio. And millions of people listen to podcasts and livestreams every day in compressed audio formats like MP3, in which case using a microphone with 24-bit or 16-bit audio would not really make a difference.

If I’m just recording myself talking, why would I want the Yeti X?

While the practical need for 24-bit audio is not currently essential to many podcasters and streamers, the Yeti X does still have an edge in clarity over the Yeti due to its fourth condenser. And if you are starting a podcast or other type of show in 2021, there is currently a push toward lossless audio on streaming services, so it may not hurt to “futureproof” your setup in a sense with a 24-bit audio USB mic that would stay relevant if audio quality expectations continue to go up over time. For example, 24-bit/48kHz audio (or higher) is already the preferred choice for recording music so that it can be delivered to high-definition formats.

Besides its audio, the Yeti X may be more appealing to those who are thinking about the on-camera appearance of their mic for their videos on YouTube, Instagram, TikTok, and so on. Whether you think the Yeti or the Yeti X looks better is a subjective matter, but having the LED level meter with customizable colors is certainly a way to stand out and the Yeti X is at least much less common (for now), whereas Blue claims there are currently millions of the original Yeti in use.

So is the original Yeti still good enough?

There are plenty of people using the Blue Microphones Yeti today for a podcast, a Twitch stream, a YouTube channel, etc., and their shows probably don’t suffer at all for using the Yeti instead of the Yeti X. So, if you really want to save money or if you just prefer the silver or blue Yeti colors that aren’t available for the Yeti X, which just comes in black or white, you will get one of the best USB microphones for the money in the original Yeti.

On the other hand, you would also get a considerable amount of improvements for the extra $60 for the Yeti X, which upgrades the Yeti in almost every conceivable way. The Yeti X offers a clearer, richer sound from its additional condenser capsule and digital audio resolution, additional hands-on audio controls, a customizable multicolor LED level meter ring, voice EQ settings through software, and a slicker design that offers a cleaner experience for detaching and reattaching the mic to its stand.

Regardless of the model you choose, the Blue Yeti vs. Yeti X debate features USB mics that have deserved reputations as two of the best for the price. In the USB mic market, the Yetis are strong in build yet sensitive to sound, accurate, reliable, and easy to operate, plug-and-play options for computer- and smart device-based broadcasting.

has written about pro audio, music technology, and consumer electronics since the turn of the millennium, including stints at Electronic Musician, Maximum PC, DJ Tech Tools, and Remix. He is his own favorite DJ and would rather be making beats for nickels