Blue Yeti review: No. 1 for more than one reason

The industry-standard Blue Yeti USB microphone still has the sound, the looks, and the brawn to satisfy. 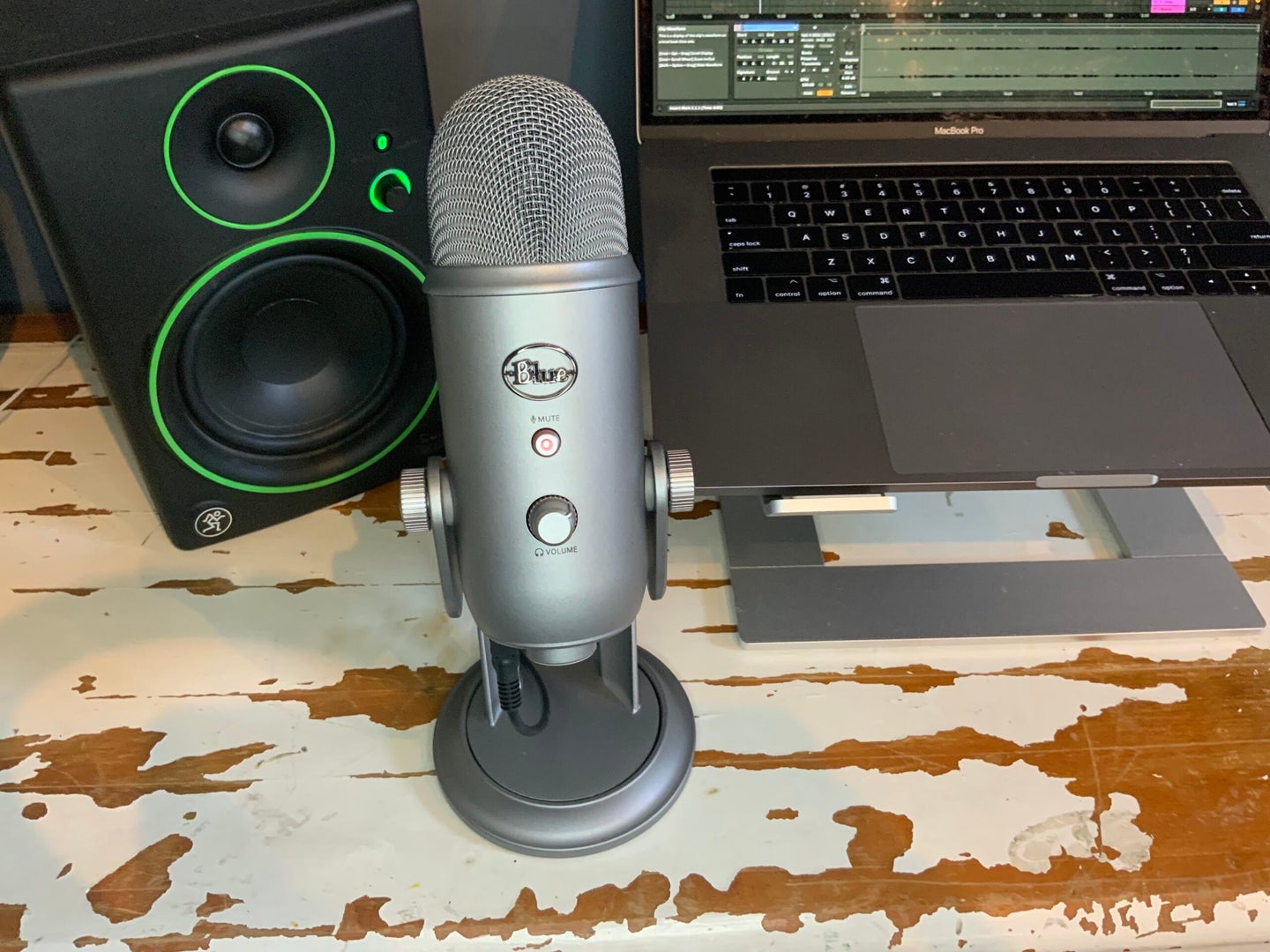 Debuting over a decade ago, the Blue Yeti USB microphone has become a recognizable accessory on podcasters' desks. Markkus Rovito
SHARE

Over the last several years, the ease with which folks can broadcast their Roblox sessions and musings about celebrity beefs has helped balloon the professional USB microphone market to more than 100 models. But long before that, there was the Blue Yeti mic. In 2009, the American company Blue Microphones debuted the Yeti ($129.99) as a “premium” USB microphone aimed at pro, semi-pro, and aspiring broadcasters, singers, and musicians. At that time, even the better USB mics were more likely to resemble Blue’s own Snowball: a decent, but novelty mic with a quiet input signal and few features.

Since then, the USB mic world has exploded with professional models matching or, sometimes, exceeding the elder Yeti. And Blue, which Logitech acquired in 2018, has kept pace, introducing a gang of other Blue Yeti USB microphones for various needs. However, the O.G. Yeti—sporting its standard-setting additions like a headphone output, four pickup patterns, and a sturdy metal stand—is still a great, user-friendly option for new podcasters, streamers, and recording musicians who want a plug-and-play, reliable USB microphone with a proven sound.

By now, nearly everyone has seen the Blue Yeti mic in front of someone’s face in an online video. Along with the Shure SM7B, the Yeti is one of the most ubiquitous streaming mics. Blue claims that millions have been sold, marking it as one of the best podcast microphones by sheer volume. When secured in its 2.2-pound, bottom-padded desktop stand, the iconic design is nearly 12 inches tall and looks somewhat anthropomorphic from the front. The 1.2-pound recording microphone cuts a commanding image on the screen and, as an added bonus for any streamers who like to keep their mics in sight of the camera, the standard Yeti comes in a variety of colors—including blue, silver, teal, red, and black—while the Yeti for The Aurora Collection edition adds Pink Dawn and White Mist.

You can swivel the mic in its stand to reposition it, but for greater flexibility, the Yeti unscrews from its base and can be mounted to a standard microphone stand or boom arm. Any microphone boom arm will work, but Blue offers its own Compass ($99.99), as well as the optional Radius III shockmount ($49.99) made specifically for the Yeti, Yeti X, and Yeti Pro mics to attach to boom arms and mic stands.

The Yeti includes a mini-USB port and a 3.5mm audio jack for plugging in headphones. The front-facing Volume knob controls the headphone output level, while the red-LED Mute button silences the microphone’s input. A rear-facing Gain knob controls the microphone’s sensitivity, and the Pattern switch selects one of the Yeti’s four pickup patterns—internal settings that focus the mic’s audio capture to specific areas in front, behind, or all around it. This Pattern control is a bit stiff to switch, which Blue remedied on later Yeti upgrades.

Getting started with the Yeti

Setting up the Yeti was about as painless as it gets. It’s plug-and-play compatible (no drivers needed) with Windows 10 or higher and MacOS 10.13 or higher. It is also USB powered, so I just plugged the included cable into my MacBook Pro, chose “Yeti Stereo Microphone” as the audio input and output in System Preferences, and immediately started using it as a microphone and to listen to the computer’s audio. You may also have to choose the Yeti as the audio input and/or output in particular software programs, like Audacity or GarageBand.

Using the Yeti with my USB-C iPad was just a simple matter of connecting its USB cable to one of Apple’s $69 Digital AV Multiport Adapters, and the iPad immediately recognized it as a microphone and audio output. As we get closer and closer to a world of USB-C hegemony, people not wanting to live a dongle-icious lifestyle may shy away from the Yetis in favor of compatible options like the PreSonus Revelator USB-C mic ($149.95).

On the occasions when using the Yeti in its included stand was not ideal, I easily mounted it to a third-party mic stand and a boom arm without the optional Radius III shockmount. While it’s not required, the shockmount is a useful accessory for reducing or preventing unwanted noise from incidental contact to the mic.

The Blue Yeti USB microphone’s robust build and professional-looking aesthetics would be all for naught if it didn’t sound good. Basically, any USB microphone will improve upon your computer’s internal pickup, but the Yeti goes another level higher with three internal condenser capsules that are highly sensitive and capture a very clear and detailed sound. If you’re used to lesser microphones, you may be surprised by just how accurately the Yeti picks up even the slightest of noises: brushing crumbs off your jeans, scratching your face, even soft background noises coming from other rooms.

Each of the four polar patterns helps you pinpoint the areas that the mic captures. Cardioid focuses on the front of the mic, trails off at the sides, and de-emphasizes the back; it’s the most common pickup pattern for a single person talking or singing. Omnidirectional captures sound equally from 360 degrees around the mic—best for when you want to represent the entire ambience of a space. Bi-directional zeros in on the front and back of the mic, so it’s ideal for two people sitting across from each other. And stereo is kind of a variation on omnidirectional: It uses the left and right channels for creating a wide audio image and is well suited to recording instruments or when there are multiple sound sources in front of the mic.

If you’re using the Yeti to record tracks into software, it’s worth reiterating that its direct headphone monitoring eliminates any off-putting latency that you get when recording from microphones without a headphone output, where you have to monitor them from within the recording software. With the Yeti, you can turn off the monitoring from the software and enjoy hearing the real-time sound from your voice or your instrument while recording it. However, recordists should note that the Yeti’s 16-bit/48kHz audio resolution, while fine for most streaming purposes, is below the 24-bit resolution that many modern musicians and producers prefer.

The Blue Yeti sound in comparison

I tested the O.G. Yeti against its most recent update, the $169.99 Yeti X—which records at higher 24-bit/48kHz resolution and boasts an additional condenser—as well as the original issue Blue Snowball, the $249 Shure Super 55 (a pro dynamic mic made for live vocals), and the $499 Avantone Pro CV-12 (a tube condenser mic). I recorded spoken and sung vocals, percussive instruments, and stringed instruments from each one. Everything was recorded with a cardioid pattern for consistency.

While I preferred the overall sound of the Avantone tube mic because those tend to be better for bringing out nuanced details from voices and instruments without sounding harsh, the Yetis held their own against the more expensive Shure dynamic mic. The Yetis have stronger input signals, so the same sounds recorded through both sound louder from the Yeti. The Yetis also have an equal ability to hold onto lingering sustained notes, and they reproduce crisper details for vocals and textured strummed chords than the Shure mic, which had a tendency to sound slightly muted.

Compared to the old Snowball, which is equivalent to today’s $49.99 Snowball Ice, the Yetis definitely give you what you pay for in terms of full-bodied sound, clarity of detail, and sheer volume, while the Snowball sounds thinner. For instance, when recording bell tones into the different Blue mics, the Snowball rings much quieter, less detailed, and doesn’t sustain for as long. Finally, when compared to each other, there is a small but noticeable difference in the fidelity of the Yeti X over the original. Spoken words are just a hint clearer, and strummed instruments rang just a little more textured and resonant. The Yeti sounds just slightly harsher for “esses” and other consonant sounds, as well as breath sounds.

So, should you still buy a Blue Yeti?

While 12 years may be rather old for a USB microphone model, it’s nothing for the category in general, considering the Shure SM58 mic is well over 50 years old and still a best-seller. While there are dozens upon dozens of newer USB mics available, the original Blue Yeti microphone offers ease-of-use, tank-like build quality, essential features, and sound quality that helped lay the groundwork for the best podcast microphones, for streaming thoughts and reactions, or if you just want to sound a lot better and look cooler during Zoom meetings.

For an extra $40, the Yeti X—with its higher resolution and depth of presets—is worth the investment if you really need audio quality that surpasses the average YouTube channel. However, for a proven USB mic with the looks, sound, and features for most streaming and podcasting needs, Blue Microphones’ steady ol’ Yeti still fits the bill.