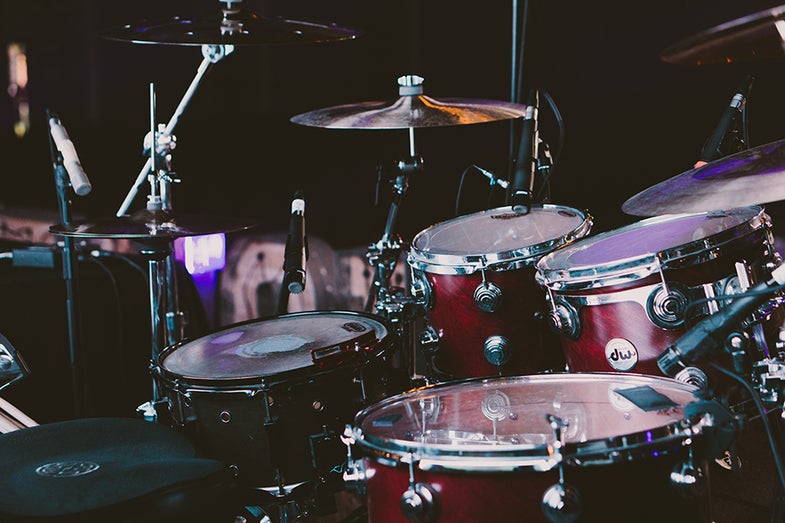 There has never been an easier time to record and release music to the world—or a small group of your most non-judgmental friends. Tech has really democratized the process, and musicians can now easily record an entire band from their bedroom. That’s thanks in large part to portable and relatively inexpensive recording studios that a songwriter can carry with one hand.

You can auto-tune imperfect performances and cut up and re-arrange songs from your laptop, and companies are touting new and improved recording devices every year. For musicians and songwriters, the possibilities are endless. To prove the point, I’m going to take the next few months to write and arrange a song using new pieces of music tech.

I’m starting with drum recording. I’ve personally pushed back against programmed, electronic percussion, mostly because it takes hours to lay down a performance that can be done in a couple minutes with a few microphones—plus I’m a drummer and it’s a pride thing. I’ve spent years recording demos on an iPhone or with a small mixer, microphones, and mic stands, but recording live drums in a way that sounds good has never been easy or cheap.

Yamaha’s new EAD10 electronic acoustic drum module helps bridge a gap between acoustic drum sets and quality digital sound. To be clear, this isn’t a new drum, but a new way to record drums. A sensor box—with a stereo microphone and a built-in bass-drum trigger—attaches to the top of the kick drum, which connects with two wires to a brain module. That’s it.

The EAD10 lets the musician play along with, hear, and see themselves practice. With the app, you can also choose a song from your music library and change the tempo of it to make it easier to practice. The tool also makes it easy for the drummer to record and share their performances online. With the EAD10, you can record an entire drum set through a computer or on your phone—including video—and upload that performance directly to sites like Facebook, Instagram, or Youtube from the free iOS app.

Instagramability is great, but how does the tech sound?

Within the sensor box, there are two high-SPL—sound pressure level—stereo microphones that capture the performance from your entire drum kit. The microphones are designed to withstand loud noises without distorting the sound. The second element, the kick-drum trigger, allows you to set off one of the 757 onboard sounds from the module to enhance the sound of the bass drum.

Plug in a pair of headphones so you can hear the sounds and continue to manipulate the effects. You can record drums straight or tweak elements like reverb and compression. Or you can use genre-specific pre-sets like 1981 Phil Collins-style drum fill.

Depending on how drum-heavy one side of your kit is—maybe you have four loud cymbals on your left—the mic lets you to adjust the gain on the left or right side, which is key to making sure your recording levels are balanced. The device also allows for two external pads and bonus drum triggers to incorporate electronic elements. There are 50 presets and you can create up to 200 custom pre-sets for effects and configurations.

While the EAD10 won’t replace a clean studio recording—individually mic’d drums will always give you more control over a mix—it’s a positive step forward for making drum recording more accessible.