The shape of things to come: Different types of microphones and when to use them

Get to know how types of microphones work so you can pick the perfect one for singing, streaming, podcasting, etc. 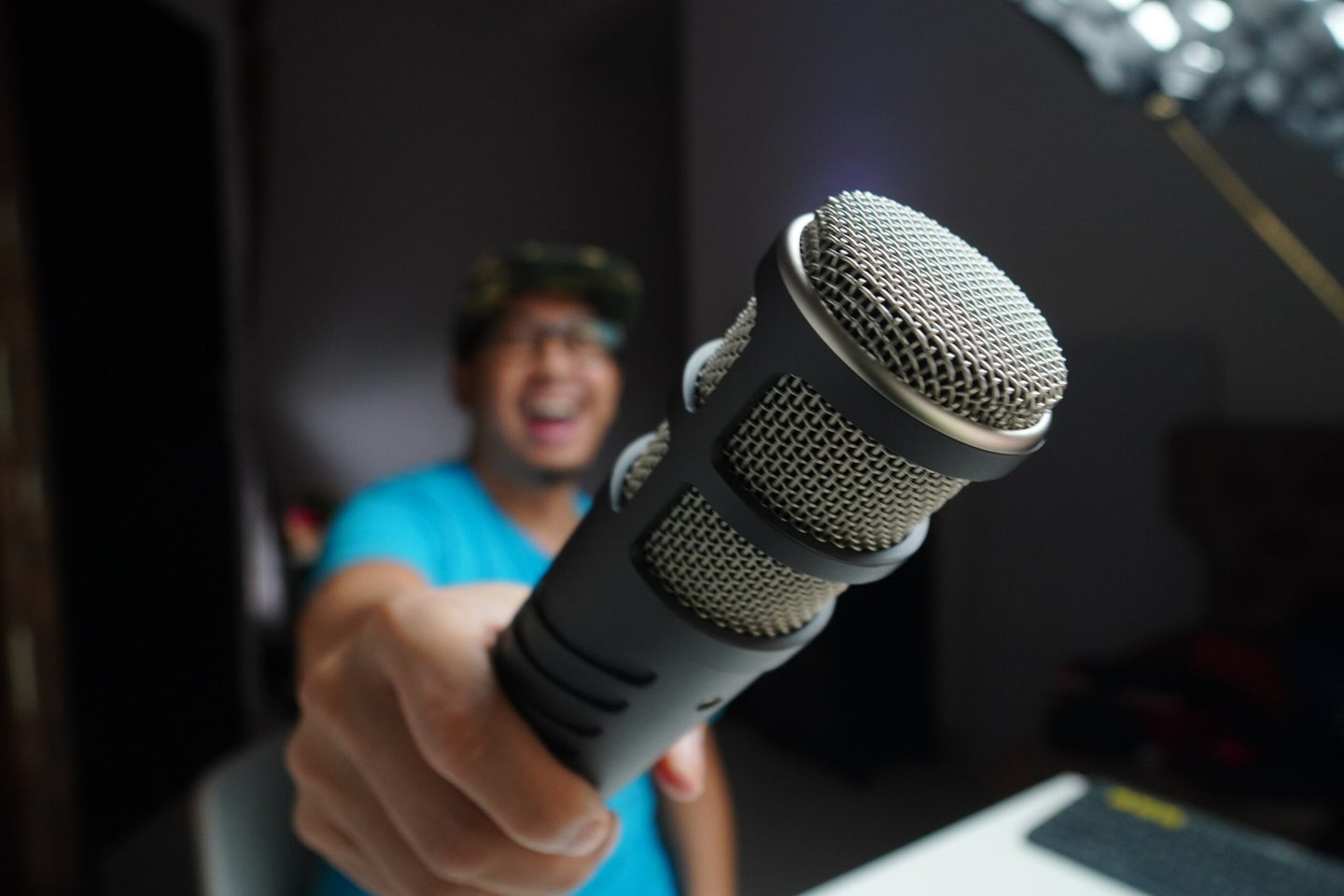 Every mic can pick up sound, but that doesn't mean you should pick up every mic. We explain the differences. Medy Siregar, Unsplash
SHARE

What is a mic, really?

Microphones capture sound waves in the air and turn them into identical electrical signals. To replicate the original audio, you can send the signals from the mic’s output to a mixer or audio interface for recording or to studio monitors (or mixing headphones), which turns them back into sound waves. But to get something good out of your speaker, you need to make sure you’re getting something good to begin with. So here’s our primer on what to expect from different types of mics.

All three have the same core construction, though. The capsule, sometimes called a baffle, picks up the sound and converts it to electrical energy. Inside the capsule is a diaphragm, a thin membrane that vibrates when it comes in contact with sound waves, initiating the conversion process.

The ideal types of microphones for a given situation directly capture your intended audio source, such as your voice or a musical instrument, without picking up any other nearby sound. For example, a singer on stage needs a type of microphone that will capture her voice while minimizing the pickup of the instruments in her band. (The audio from other non-intended sources picked up by a mic is referred to as “bleed” or “leakage.”)

Do the types of microphones record differently?

The three most common polar patterns are cardioid, omnidirectional, and bi-directional (aka “figure-8”).

Cardioid microphones are unidirectional. They pick up significantly more sound from the front of the capsule than the back and sides. The name cardioid stems from the heart-like shape you see in a diagram of its polar pattern.

Most consumer and hobby-grade unidirectional types of microphones feature at least one of three cardioid patterns.

Supercardioid mics are more focused on the front than cardioid mics but have a small lobe that picks up from the back but at a much lower level.

Taking this to its logical extreme, a shotgun mic—like the Sennheiser MKE 400—only picks up sounds directly in front of it, and only from a distance. Shotgun mics feature a lobar pattern, a modified version of hypercardioid or supercardioid that’s even more directional. You’ll often see them mounted to high-end video cameras.

If you don’t care about ambient noise, you can use an omnidirectional microphone, which picks up equally from all directions. They’re great for situations where you want to record sources on more than one side of the mic. If you’ve ever seen multiple singers gathered around a single microphone, they were likely using one of these.

An omni mic is best used in either a recording studio setting, where you can control ambient noise, or in a situation where you want to record everything around you. Imagine recording an acoustic guitar in a cathedral and you wanted the room’s acoustics to be a part of the recording.

Lastly, bi-directional mics pick up equally from either side of the capsule but reject the sound coming from the front. That makes them useful in the studio for ensemble miking situations where you want to record, say, a background singer on either side of the mic but minimize the bleed from an instrument that’s positioned in front of it.

Does what’s inside a microphone make a difference?

Dynamic microphones—like the beyerdynamic M70 Pro X or Samson Q9U—use a process called electromagnetic induction to convert sound waves to an electric signal. Inside the capsule is a Mylar diaphragm with a conductive coil attached to it. When sound waves vibrate the diaphragm, it moves the coil in a magnetic field, creating an AC voltage. As a result, dynamics are sometimes called moving-coil dynamic microphones.

They’re durable and versatile. Dynamic mics are less likely to overload and distort than condenser mics when capturing high SPL sources such as drums, guitar amps, horns, and vocals. Their capsules tend to be less delicate than condenser mics, making them well-suited to be handheld vocal mics for live performance.

They also have lower sensitivity than condenser mics, so they require higher sound pressure levels (SPL)—that is, louder sources—to operate.

Condenser microphones—like the beyerdynamic M90 Pro X or the Neat Microphones King Bee II—use electrostatic technology to function. In the most common design, a movable metal diaphragm is attached to a fixed metal plate, and both are charged and have electrodes attached. When sound waves hit the diaphragm, it changes the distance between itself and the plate, creating what’s called capacitance and resulting in small voltage changes that mimic the original wave. (Fun fact: Condenser mics are sometimes called “capacitor mics,” particularly in the UK.)

A condenser mic usually requires an external power source to charge it. They typically pull their charge, called “phantom power,” from a mixer or audio interface.

Of the three types of microphone designs, condenser mics generally offer the best high-frequency audio reproduction, which makes them the most common choice for capturing the nuances of voices. Their high-end response also allows them to better reproduce transients, the peaks at the beginning of a sound wave. Hand percussion, such as shaker and tambourine, and acoustic guitar, also benefit from accurate transient reproduction.

Many large-diaphragm condensers offer multiple polar patterns, so you can switch among cardioid, omni, and bi-directional. Some even let you customize the polar pattern to fine-tune its directional focus.

Ribbon microphones are technically a form of dynamic microphone but are generally treated as a separate design because they work and sound very different than their traditional counterparts. The ribbon design includes an extended rectangular diaphragm made of thin aluminum with magnets at either end. When sound waves hit it, it vibrates to create an electrical charge. The great majority of ribbon mics feature a bi-directional (figure-8) polar pattern.

A great ribbon mic offers the most natural sound reproduction. Its frequency range most closely mimics human hearing, so audio doesn’t come in as bright as on condensers or dynamics, but vocals and instruments sound very clear and natural. Ribbon mics are primarily used in recording studios, where you can get perfect positioning and keep them protected, as they tend to be more delicate than the other types.

Another critical concept you should know about certain types of microphones is the proximity effect, which is present in all mic types except those with omnidirectional patterns. It manifests itself in an increase in low-frequency response the closer the mic gets to the source. If you’ve ever noticed how much deeper your voice sounds when you put the mic right up to your mouth, what you’re experiencing is the proximity effect.

The effect is most noticeable on sources with a lot of low-frequency content, such as male voices. Radio personalities have long used the proximity effect to make their voices sound bigger and more authoritative.

Although you can use the proximity effect to help thicken or deepen the sound of the source, you have to be careful not to add too much low-frequency information. One of the reasons that singers use pop screens in front of mics in the studio is because the accentuated low frequencies from the proximity effect mean that the mic will pick up more plosives (popped consonant sounds like “P” and “B”).

How to pick from the types of microphones

When choosing from the many types of microphones, the most important question to ask yourself is, “What do I need it for?”

If you’re in the market for the best podcast microphone and only want to record your own voice, a large-diaphragm condenser is probably your best choice because it excels in vocal reproduction. You won’t need multiple polar patterns, just cardioid. You might consider a USB condenser mic—like the Blue Yeti—for your podcast recording if you don’t own an audio interface. The advantage of a USB microphone is that you can plug such a mic straight into a compatible port on your computer without any additional hardware.

However, if you’re looking for an all-purpose studio microphone for recording—something like the Shure SM7B, which is a great microphone for recording vocals—presumably you’ll be using an audio interface so a large-diaphragm condenser XLR microphone with multiple patterns is probably your best choice because of its quality and versatility. But if you’re strictly looking for a mic for recording acoustic instruments, you might want to consider a small-diaphragm model that will likely give you superior high-frequency and transient response.

For live vocals, you can’t go wrong with a cardioid dynamic mic. It’s the near-universal choice of live sound engineers worldwide. If you like to move about the stage while performing, you might consider a wireless microphone, which will include a receiver in addition to the mic.

The cliché “you get what you pay for” is particularly true when it comes to the types of microphones. Whether you’re connecting it to an audio interface, mixer, or computer through USB, the mic is the most critical component in the signal chain. If it doesn’t provide an authentic reproduction of the source, all the rest of the gear is irrelevant. As you put together the essential gear for your home recording studio, it pays to test different microphones to find the right kind for your specific project, and then purchase the best quality mic you can afford.

is a writer and editor specializing in music technology. He’s the Technical Editor-Studio for Mix and the former editor of Electronic Musician. Levine is also a composer and producer who has written music for numerous national commercials and TV networks like CNN, the History Channel, and A&E. A guitarist and multi-instrumentalist, he’s played sessions, concerts, and on Broadway. Visit his music site at michaelwilliamlevine.com and check out more of his writing at mikelevine.journoportfolio.com.