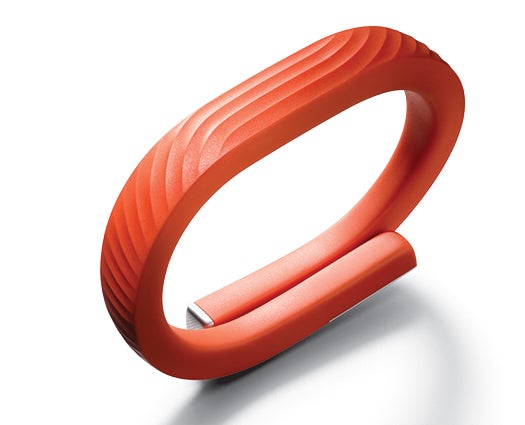 Many of the latest fitness trackers also claim to monitor sleep, so I decided to test a few. I strapped four of them to my arm 24/7 for a week of self-designed experiments. Some nights, I curbed caffeine, exercised early, and got to bed on time. Other nights, I suffered from jet lag, stayed up way too late watching Homeland, or experienced the ill effects of too much bourbon. The results were mixed.

How it works: An accelerometer that measures motion tracks both activity and rest (including sleep). An algorithm uses its data to calculate calories burned based on the user’s sex, weight, height, and age.
My take: The app breaks down sleep into light and deep phases, supposedly based on small differences in body movement. Yet on nights where my notes say I woke many times, the Up24 claims I slept soundly. $149.99 Data: 5
Ease of use: 10
Looks: 8
Comfort: 10

How it works: An accelerometer and sensors track heart rate, calorie burn, skin temperature, and perspiration.
My take: The unit repeatedly failed to sync with the app and website, and the minimal sleep data didn’t match how I really slept. (But its sweat feature did encourage me to lower the thermostat at night.) The company says a new version this year will evaluate REM and deep sleep, as well as tossing and turning in bed. $199 Data: 2
Ease of use: 2
Looks: 5
Comfort: 7

Update: In February 2014, Fitbit voluntarily recalled the Force because some wearers got a rash from the device. This story was prepared for Popular Science magazine before The Consumerist broke the story about Force rashes. Fitbit no longer sells new Forces and people who own Forces may return them for a full refund. Learn more about the recall at The Consumerist.

How it works: In addition to an accelerometer, a calorie-burn algorithm, and a meal log, the device has an altimeter to measure number of stairs (or hills) climbed.
My take: The attractive, comfortable, and straightforward Fitbit Force was the only device I’ll consider wearing in the future. But it gave me identical scores on a night I slept really well and on one when I slept horribly after a Homeland marathon. $129.95
Data: 4
Ease of use: 10
Looks: 9
Comfort: 10

How it works: It has sensors for sweat, skin temperature, heat flux, and an accelerometer.
My take: Although itchy and awkwardly placed on my upper arm, it was the most accurate. On terrible nights, it was the only one that came close to reflecting how many times I woke up. But it wasn’t perfect, claiming 78 percent sleep efficiency* on the night I felt I slept the best and 90 percent when I had jet lag. $119 Data: 8
Ease of use: 8
Looks: 4
Comfort: 3
*Sleep efficiency: Percentage of minutes in bed that were actually spent sleeping

Sleep apps generally use a smartphone’s internal accelerometer to monitor movement in bed, requiring you to put your phone facedown on the corner of your mattress. I tried Sleep Cycle, which claims to record sleep patterns and sound a morning alarm within a 30-minute range when your sleep is lightest (for the least groggy start to the day). In practice, its sleep grades were suspect. The dreadful Night of Bourbon, which included waking up at 4 a.m. with heartburn, scored a respectable 81 out of 100. 99¢

Next page: One day in the fitness-tracked life.

A Day In The Fitness-Tracked Life

Fitness trackers are increasingly ubiquitous, generally supplying metrics on how much you eat, exercise, and sleep. During my informal sleep experiment I took advantage of all the bands’ capabilities to see how they compared.

Here’s a snapshot from one 24-hour period, starting early on December 6 and ending the following morning. My notes say I was jetlagged and felt groggy in the daytime. In addition to a few walks with my dog, I tried a 60-minute spin class around noon in hopes that the exercise would help readjust my sleep cycle. That evening, I went out to dinner and indulged in big mugs of beer. I felt that I slept pretty well, waking at least once around four o’clock in the morning.

None of the trackers perfectly captured my day. Food-wise, it was difficult to enter meals, especially since I cooked from scratch or ate at a restaurant for each meal instead of making pre-packaged food with available nutritional information. All of the devices seemed to underestimate my calorie intake. Not all could capture my exercise routines, either, and there were discrepancies in how well I slept. And none of the data perfectly matches between one device and the next.

The minimal data for this device displays through a smartphone app. Logging food was a little tricky—unless I entered it in real time, I had to manually change the time for every food item. As for exercise, the app let me manually input a spin class since the band couldn’t capture the intensity of the workout.

The sleep data, available both on a website and an app, was the least descriptive, although this may be improved with a recent software upgrade (which I haven’t tried). Tracking food wasn’t an option, and although Basis can automatically detect exercises such as running and cycling, it can’t recognize movement on a stationary bike and has no option to manually input activities.

The data displays through both an app and a website, and is relatively easy to read. Food was easy to log, although the app didn’t capture nutritional data. As with the Jawbone, I was able to manually input my spin class.

Dashboard (note the sleep time listed here is from Thursday night, not Friday):

This band had by far the most comprehensive data. Everything was available both online and in an app, although the online dashboard had a lot more power. As with the Jawbone and FitBit, I could manually enter the extra exercise that the band couldn’t capture.

A shorter version of this article appeared in the March 2014 issue of Popular Science.