This stick-on sweat monitor knows when you need a drink

It's being tested by the Air Force and sports beverage companies 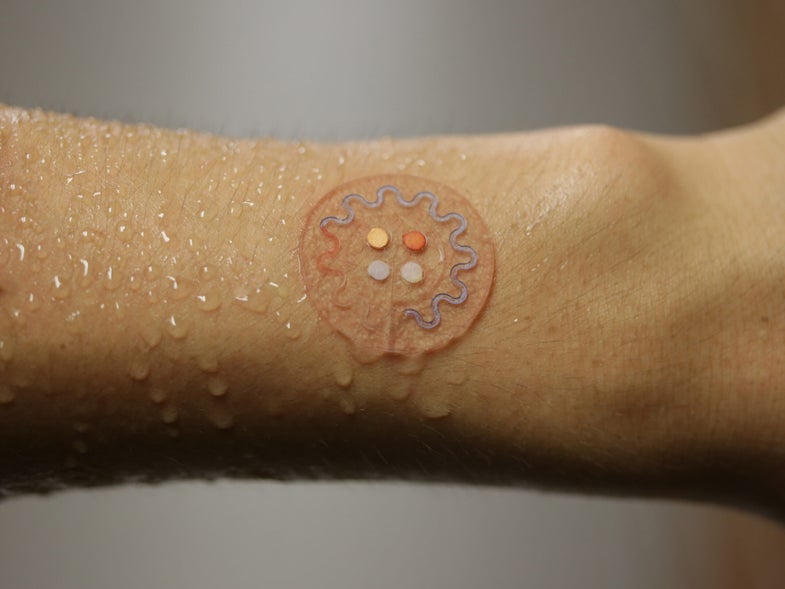 Researchers are developing a stick-on sweat sensor that could one day let you know whether you need to rehydrate or replenish your electrolytes. J. Rogers/Northwestern University
SHARE

Current fitness trackers can tell you how many steps you’ve taken or whether you’ve met your target heart rate. But a new sweat monitor in development could keep track of whether you need to hydrate and replenish your electrolytes.

The flexible stick-on patch, whose creation was led by researchers at the University of Illinois at Urbana-Champaign, attaches to your forearm or lower back to measure your electrolyte and glucose levels, rate of sweating, and more. It’s basically a laboratory test that you can wear on your skin.

It works by sucking up sweat and channeling it through tiny capillaries to four circles at the center of the device. Each circle contains enzymes that react to your sweat’s glucose, lactate, chloride, and pH levels, which can all indicate whether you are overtaxing your body. The circles change color as they sample your sweat. A smartphone app would use your camera to analyze the colors, determining the contents of your sweat.

Researchers tested the sweat monitors on a group of indoor bicyclists as well as 12 volunteers riding outdoors in the El Tour de Tucson in Arizona. The tests confirmed that the patches stay attached and can do their job in real-life exercise situations, but the team is still working out the interface that would help users interpret the color data. “We don’t, right now, have an app with a user-friendly front-end interface,” says John Rogers, a materials science at Urbana-Champaign and senior author of a new study on the patches.

The patches are designed to be cheap and disposable after a single use. Each one monitors sweat for up to 6 hours at a time, depending on how much the user is sweating.

Rogers says that the Wright-Patterson Air Force Base and a “leading supplier of sports beverages” are currently running field trials with the device. Popular Science has asked for more details about that. But in the meantime, the paper hints at what those experiments may be investigating:

So in other words, the patches might be able to warn an athlete or soldier that she’s getting close to overexerting herself before it’s too late to do something about it.

The sweat trackers likely won’t be ready for prime time for a few years, but they could find a niche market. While other groups have conceived of sweat trackers worn on a wrist band, these stick-on sensors could prove more useful in sports where the wrists need to be kept free, such as in martial arts, volleyball, and kickboxing.