Should you ditch your iPhone or Samsung device for Google's new phone? 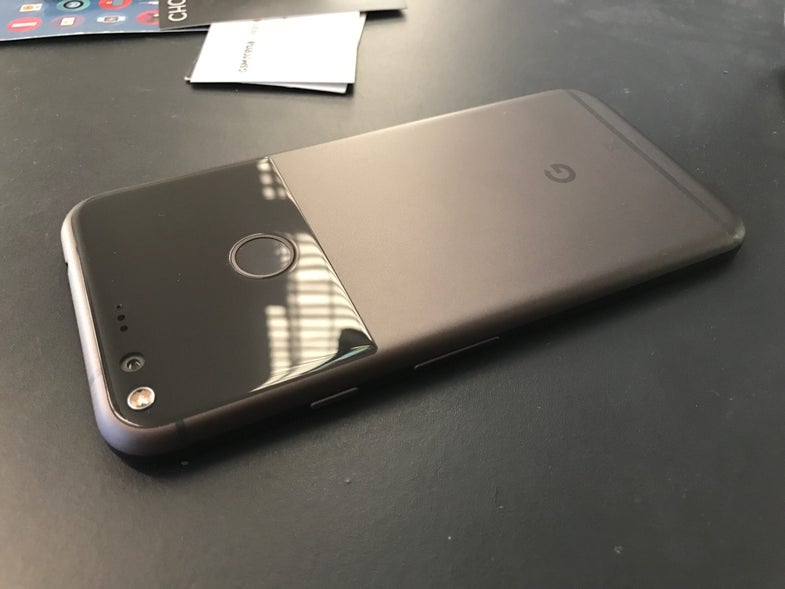 Since the first Android phone, Google’s offered up its smartphone operating system that rivals Apple’s to phone manufacturers like LG, HTC, and Samsung while letting those companies handle the hardware. The Nexus line of devices were destined to serve as the titular Android experience but Samsung phones remained dominant in terms of popularity and outright sales. So Google not only made a de-facto Android phone, the company even put its name on it.

So in 2016, we finally have a Google phone. Or more accurately, Pixel: Phone by Google. The Alphabet-owned company wants to position this device as the iPhone of Android phones–a premium-made device at a premium price. But if Google is taking on Apple and Samsung with the Pixel, how does it fare?

It Looks Thick, Why So Big?

In recent years, phone makers have placed a priority on thinness. Even though a bigger phone tends to lead to a bigger battery, handset manufacturers like Apple prioritize the depth of the device–even if it means a camera lens that’s sticking out from the back of the phone. Google eschews this thinking with its Pixel phone.

The phone isn’t a monstrosity, but it does look beefier than the other 2016 phones on the market. Unlike the Samsung Galaxy S7, for example, the back of the Pixel is one even surface. The phone’s camera (more on that later) stays tucked beneath the surface and there’s a good chance Google was able to fill the extra room with more battery (more on that later, as well). The Pixel XL we tested has a 5.5-inch screen, the same diagonal screen-size as the iPhone 7 Plus, but felt much more comfortable to hold than the sometimes unwieldy larger iPhone. Using the large Pixel feels like holding a smartphone. Using the large iPhone feels like handling a lunch tray.

Google’s quick to tout the prowess of its rear shooter on the Pixel phone. The 12.3-megapixel camera is comparable to rival smartphones on the market with one standout metric: Google’s phone receives a DxOmark rating of 89, better than any other smartphone on the market. 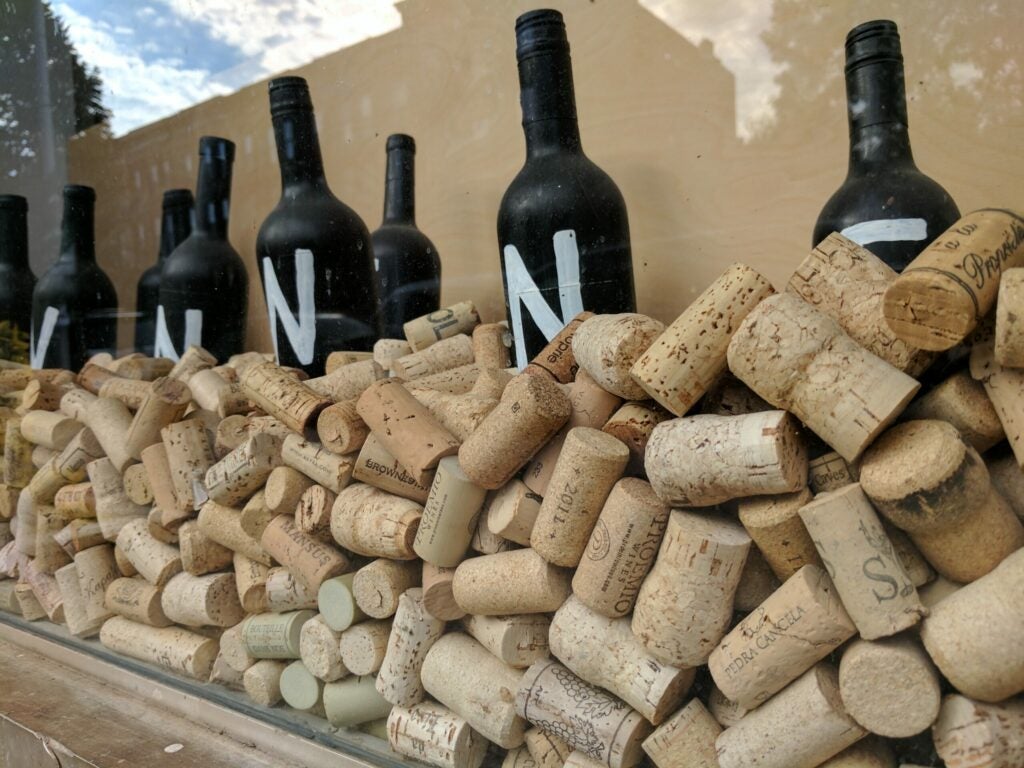 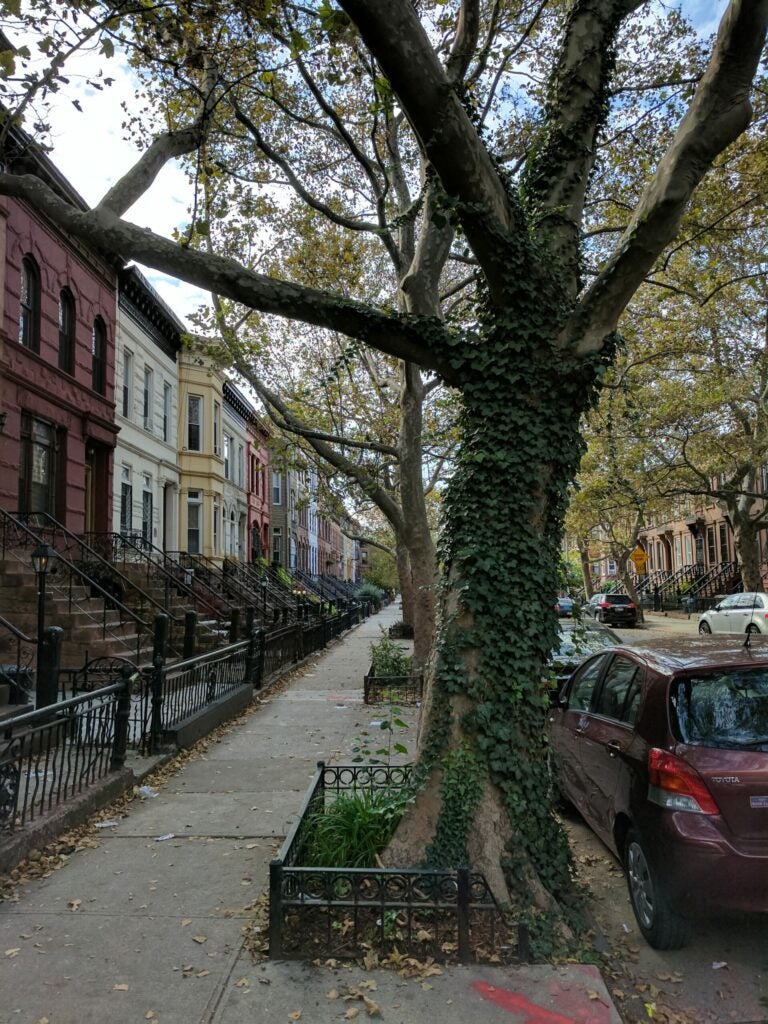 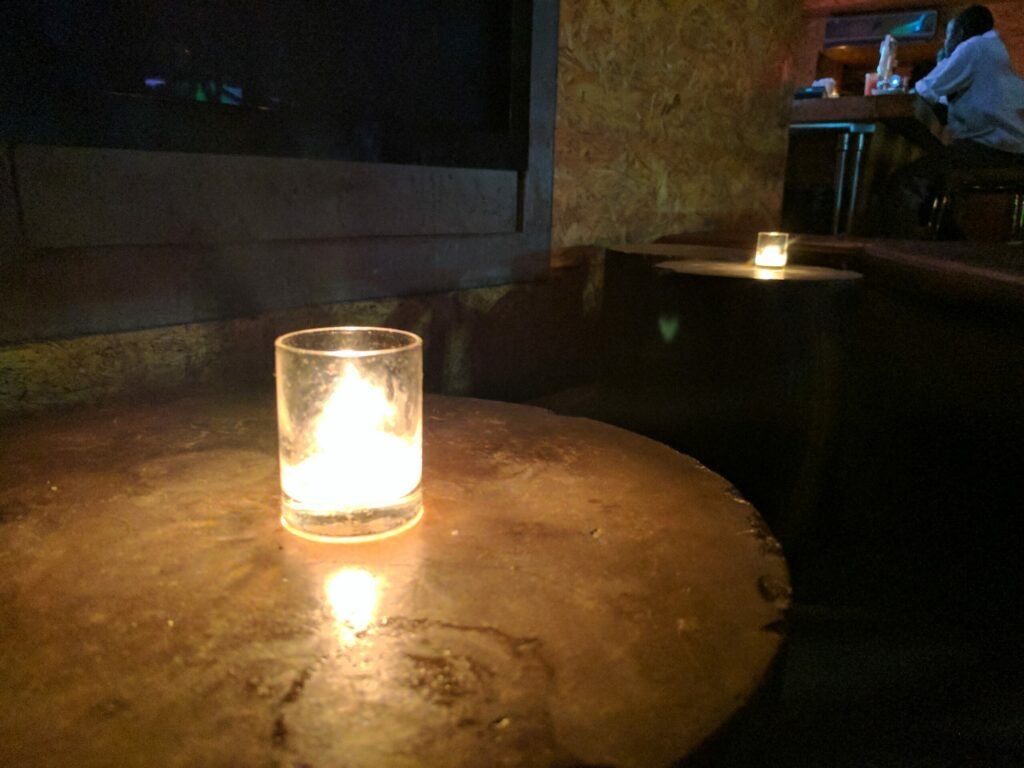 And this is how it compares to iPhone 7 Plus photos of similar subjects. 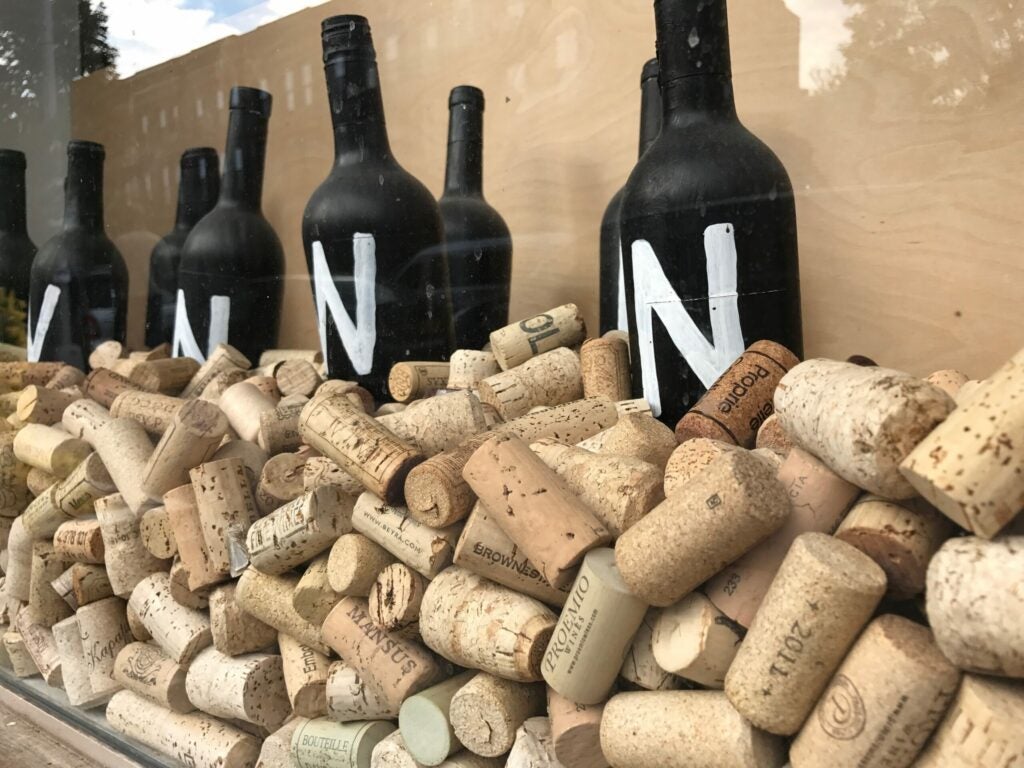 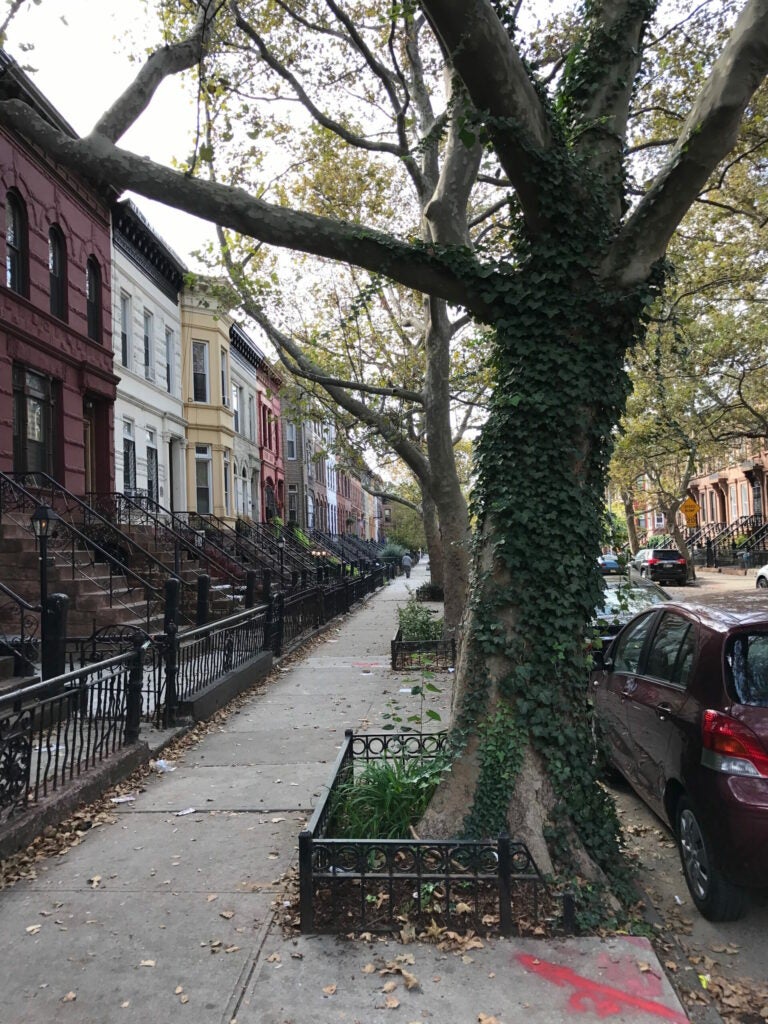 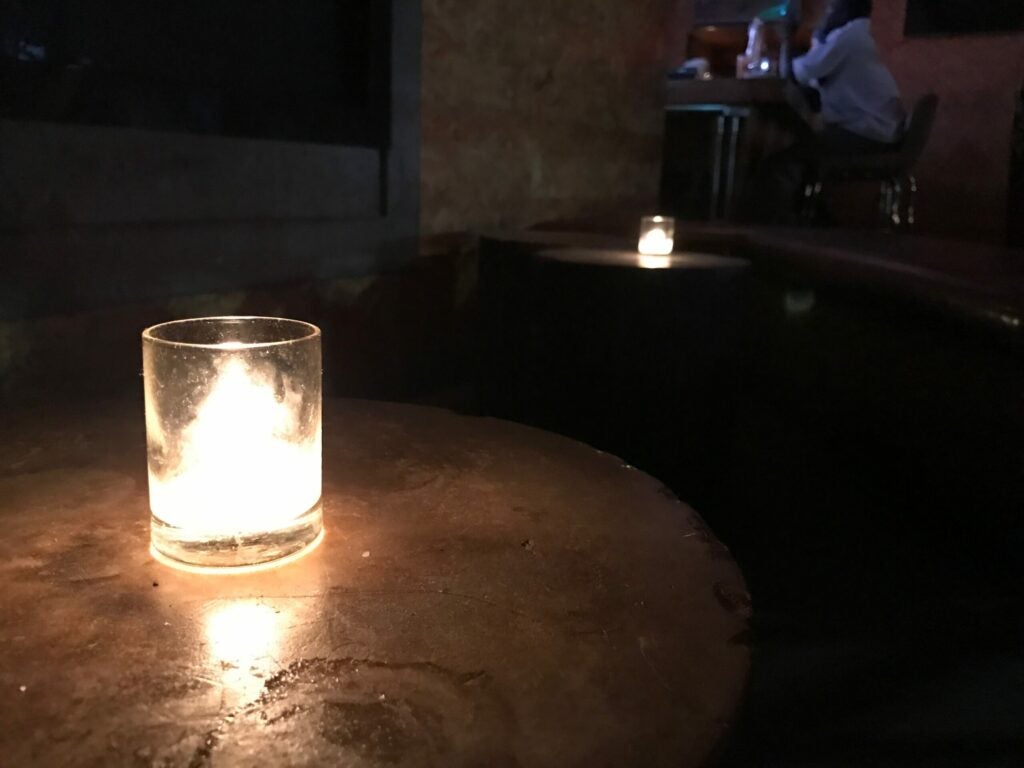 iPhone 7 Plus at bar

The Pixel’s highly-rated camera holds up well in low-light situations like at the bar or after sundown too. And selfies come out clear when using the front-facing camera.

The Pixel can’t rival the second telephoto lens on the back of the bigger iPhone. Nor the zoom that comes with it–the iPhone can zoom farther and offer a clearer photo. Zoom aside, Google’s premium phone camera is just as capable as Apple’s. If you’re using your smartphone to take photos you likely aren’t planning to use those pictures for professional shots or printing poster- or billboard-sized images. Snap a photo with this camera and your picture will come out good. Just like if you took that picture with iPhone or Galaxy S7, it will come out fine. For many real-world uses, the Pixel and its competition are plenty.

Does it really have unlimited storage?

Google’s Pixel phone ships with 32GB storage options, which actually leaves you with 23GB of storage you can make use of. Google also offers a 128GB version of the device for those looking for added storage. You won’t be able to add a micro-SD card to the Pixel, but Google’s phone can rely on something else.

Google’s offering Pixel users the option of offloading their photo and video library onto Google Photos when needed. Swiping open the app’s hamburger menu to the left and selecting “Free up space.” The phone will ask if you want to upload “X” number of pictures and videos to the cloud. Selecting yes will upload everything to Google’s servers and free your device from the clutches of clutter. When you’re without service you’re still able to load lower-resolution versions of your photos. 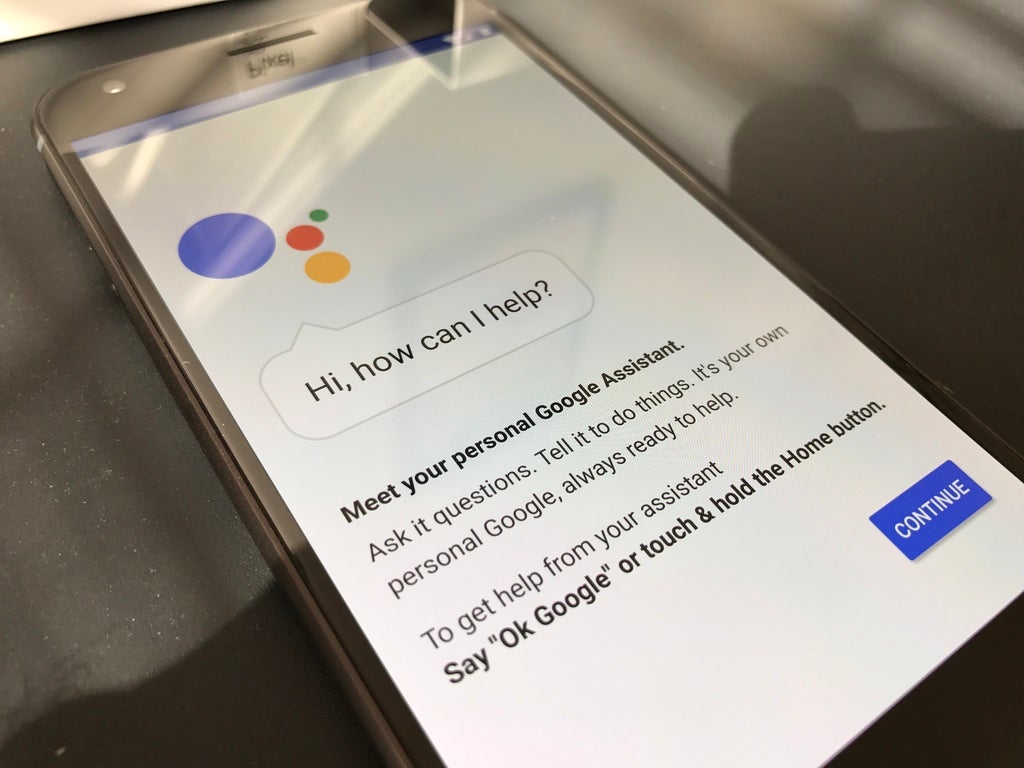 Pixel, the phone by Google, offers the company’s new Assistant as a replacement for Google Now.

What are the new fancy AI features?

Google is coupling its Pixel phone with the new Google Assistant. Introduced in its Allo chat app, the Assistant is the updated version of Android’s Google Now features. Say the words, “Ok, Google” aloud and the Assistant is summoned and ready to answer questions. Based on your location, the Assistant will serve up pertinent information regarding what’s happening around you. And depending on what you’re seeing onscreen, bringing forward the Assistant will have it chime in with info on that (after swiping up on the Assistant) screen. Very convenient.

These superpowers are nothing we haven’t seen from the search company in the past from features like Google’s Now On Tap. But with the new Google app Allo, the big G is able to take its rebranded virtual assistant and place it inside the device’s messenger app. So you’re able to perform searches and gather information from right within your chat screen. The feature is handy and comes with any download of the Allo app. The difference is Pixel users get the assistant featured in Allo throughout the whole operating system. Even iOS users can make use of the Assistant within Google’s app.

Does it have a headphone jack?

Yes. 3.5mm-supporting headphones will work with Google’s Pixel, and that’s without an adapter. 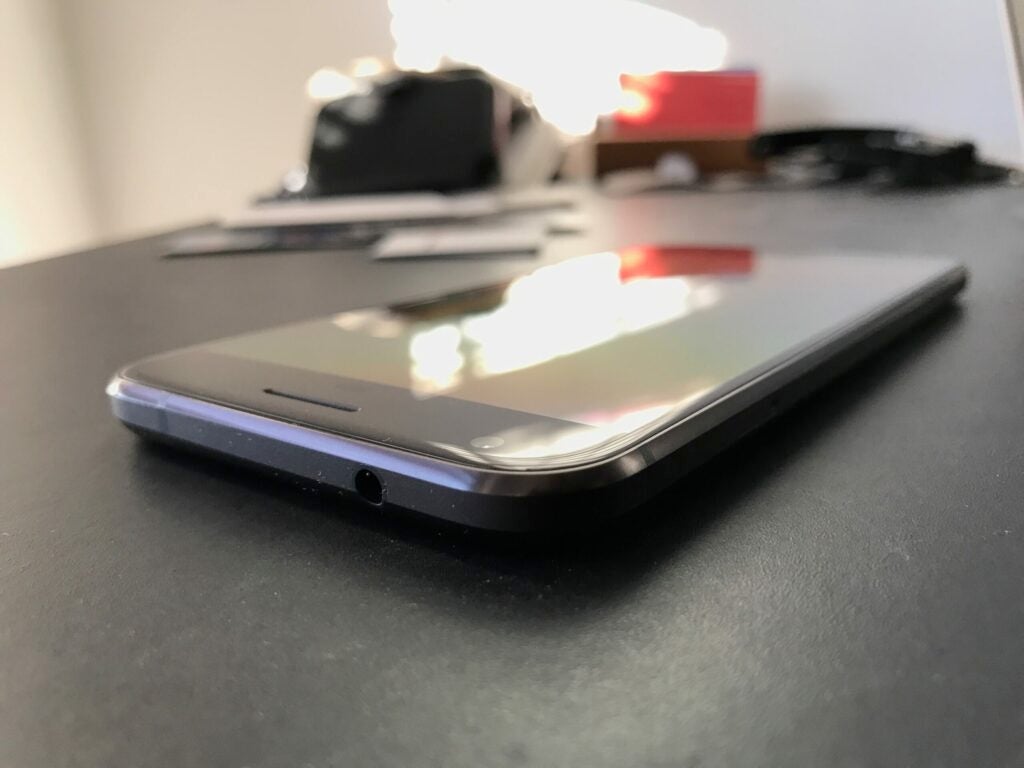 This phone has the luxury of a headphone jack

Will the battery catch on fire?

At the very least, it charges at blazing-fast rates. Google claims users can get 7 hours out of charging for 15 minutes and our tests held up with that claim. When charged with the USB-C cable and included charging block, the Pixel did indeed charge at a rapid pace. The phone indicates how fast power is moving through it by reporting just that: near the fingerprint icon you’ll see a status message that says, “Charging rapidly.” We also were able to get the phone to be “Charging” (simply plugging the USB-C to USB 3.0 into a portable battery charger) and “Charging slowly” (plugging the phone into a computer to charge).

The smaller Pixel offers a 2,770mAh battery while the larger XL offers a beefier 3,450mAh battery. Both can last you through the day during normal use. Our Pixel review unit remained flame-free throughout all of this. We’ll update this review should the handset ever go up in smoke.

The Pixel: Phone by Google, at the low-end, costs $649.99. Which is just as much as Apple’s most affordable iPhone and slightly less than Samsung’s most affordable Galaxy S7. While Google could have made the Pixel more affordable than its competition, it has situated the device right around other premium handsets. Which is to say that it’s expensive. The Pixel XL starts at $769.99.

So the question remains: should you buy? If you recently traded in your sizzling Samsung Note 7 but would like to stick with Android, there’s finally a Google phone for you. If you’re looking for an excuse to make your escape out of Apple’s iOS ecosystem, you now have the perfect opportunity. But if you’re thinking of switching because of the camera and currently have a phone from 2015 or 2016, you should do yourself a favor and save your money. Regardless, you may still be swayed by the potential that Google’s Assistant holds.