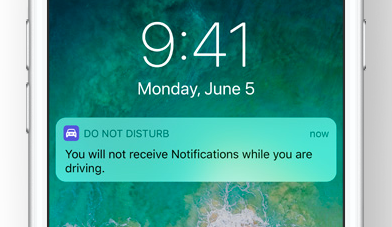 On Monday, Apple announced a slew of news at its Worldwide Developers Conference in San Jose, Calif., including a new safety feature coming to the next version of its mobile operating system, iOS 11. Called “Do Not Disturb While Driving,” the feature aims to minimize distractions behind the wheel. “It’s all about keeping your eyes on the road,” Apple’s senior vice president of software engineering, Craig Federighi, said on stage during the event.

After all, nearly 3,500 people died and 391,000 were injured in 2015 as a result of distracted driving, a category that includes mobile phone use, according to the National Highway Traffic Safety Administration.

The do-not-disturb option will keep an iPhone’s screen dark instead of displaying distracting notifications about, say, a new Tinder match, as Federighi demonstrated. Even waking up the screen will show a reminder that notifications aren’t being displayed, and people who text will receive an auto-reply telling them that the recipient is currently behind the wheel. You can also opt to give specific senders the option to push through an “urgent” message.

Federighi said that the feature can utilize Bluetooth to know if the phone is connected to a vehicle, but that even without Bluetooth, they could use the “Wi-Fi Doppler effect to measure that you’re moving in a car.”

You’ve probably heard of the Doppler effect, which explains why a police car’s siren changes pitch as it’s driving towards you, then away from you: The sound waves are essentially compressed (when it’s approaching you) and stretched out (when it’s moving away), changing the way the siren sounds to you as you stand on the sidewalk. (A similar phenomenon called “redshift” and “blueshift” exists in astronomy, and relates to light waves and objects like galaxies moving away from, or towards, Earth.)

The same basic idea can be applied to Wi-Fi. Wi-Fi signals are electromagnetic waves, and the signals coming from, say, a Starbucks emanate from a router that’s not moving. If you’re in a moving car, your phone’s Wi-Fi chip could detect the frequency change of the radio waves coming from the router.

“The [Wi-Fi] access point is not walking around, it’s just fixed,” says Swarun Kumar, an assistant professor of electrical and computer engineering at Carnegie Mellon University who studies wireless systems. “You and the car are the only one who is moving.”

Observing the frequency of the Wi-Fi signals and their variation could be used as “information about your own speed,” Kumar says. More specifically, he adds that the technology may actually be noticing the “variation and frequency” of the periodic identification beacons, which are packets of information that provide info about the Wi-Fi network’s identity and are automatically produced by the router multiple times per second, as opposed to actually trying to connect to a Wi-Fi network. (Apple did not comment further on how the technology works.)

Though the method might not necessarily give very precise data about the car’s speed, Kumar notes that it could still provide basic information as to whether someone is stationary or not. One perk to using a method like this is that it doesn’t place a high demand on the phone’s battery.

Of course, there are already apps for both iOS and Android, such as AT&T DriveMode, LifeSaver, and SafeDrive, that promise to minimize distractions while you pilot a vehicle. It’s possible that for iPhone users, iOS 11 could render apps like these unnecessary, as the new feature will be baked into the operating system and will keep all the notifications that you don’t really need to see out of sight. (The iPhone already has a general “Do Not Disturb” mode that can be manually switched on via the control center, and Android has a similar option.)

Apple already offers CarPlay, which some vehicles support, as a way of managing apps that you might need while driving (like Apple Maps, Messages, or Phone) in a simple, clear way so you can stay focused on driving, hopefully; that works by either plugging your phone directly into the car, or using Bluetooth.

Federighi said that passengers who might find themselves in a cruising vehicle can indicate that they’re not actually driving, so they’ll be free to check their Tinder matches while someone else (hopefully) keeps their eyes on the highway.