The Gear S3 Classic and Gear S3 Frontier have other fancy new features, but no pricing (yet) Samsung today unveiled the seventh smartwatch in its wearable line: the Gear S3, which comes in two models, the Gear S3 Classic and Gear S3 Frontier.

Samsung wanted to make the Gear S3 a watch first, as the company’s spokespeople hammered home repeatedly at the launch event at the IFA conference in Berlin, Germany, as well as my hands-on demo in New York City. For this reason, the S3’s display is always on with the clock showing at all times — unlike the S2, which had a screen that you triggered on when you raised your wrist (similar to the Apple Watch). The new S3 screen is capable of displaying an array of 16 million colors.

The S3 is also larger than the S2 was before it, measuring 46 millimeters in diameter for both of the Classic and Frontier options. This is partly to house a larger battery, one that is supposed to last three to four days without needing a charge. 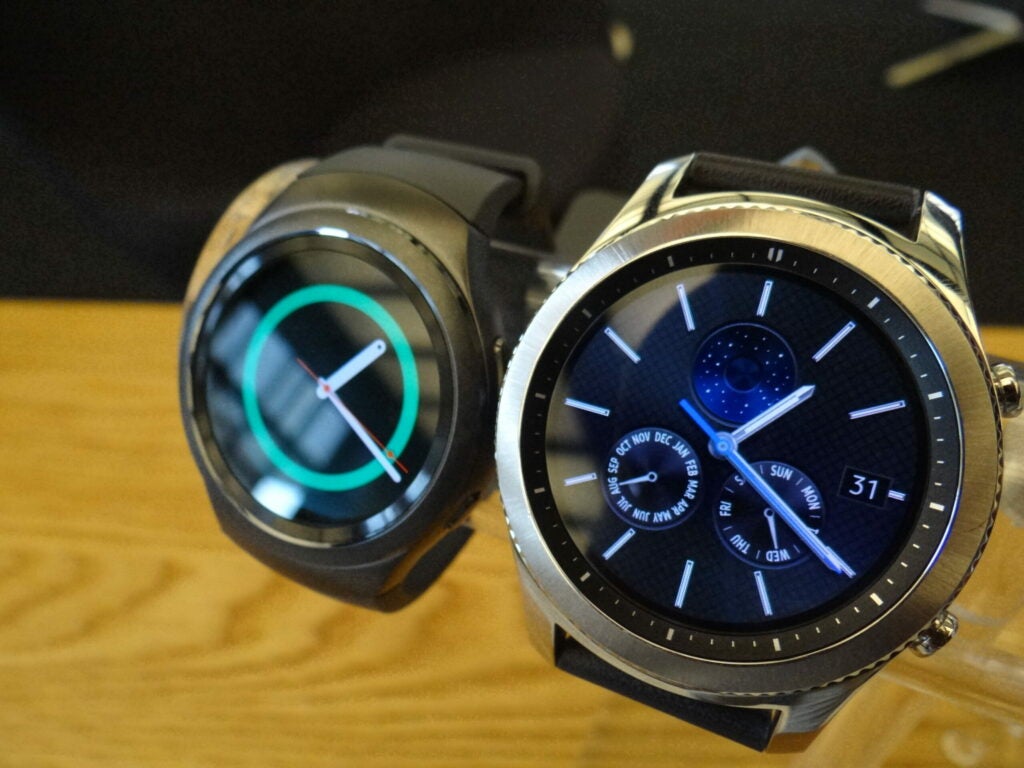 The Gear S2 and S3 Classic

The Gear S3 Classic, on the right, is slightly larger than its predecessor on the left.

The smartwatch is able to answer calls, all the user has to do is simply use the bevel to accept or decline calls. The S3 has a built in speaker and microphone, which allows you to communicate with someone Dick Tracy-style via your wristwatch.

For the more explorer types, the smartwatches also have built-in barometers, altimeters and GPS tracking that isn’t reliant on your smartphone. In fact, the S3 Frontier can stand alone and is capable of LTE. The S3 Classic is Wi-Fi only. Both models support Bluetooth connectivity, so you can connect your accessories, like wireless headphones.

An extended app ecosystem is a big upgrade that users will also see in this wearable. S3 owners will be able to stream Spotify, use Uber and Uber Pool, and search Yelp.

Another addition is the new Samsung Pay app. You will now be able to use your smartwatch, equipped with magnetic secure transmission technology and protected by Knox security, to pay for whatever you need without having to swipe your card (or inserting your chip, whichever one we’re doing nowadays). 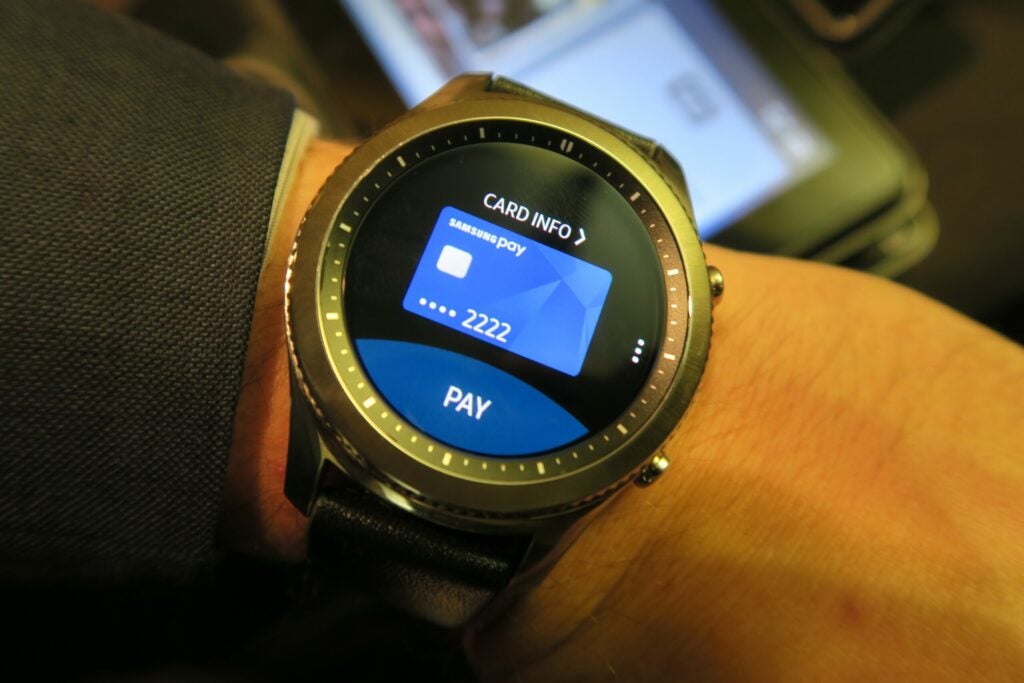 Samsung Pay allows you to securely use your smartwatch for transactions.

Samsung is cautious about not overdoing the apps, though. A spokesperson told me that Samsung didn’t want to replicate the experience of a smartphone in the watch, as their research has demonstrated that is too frustrating. 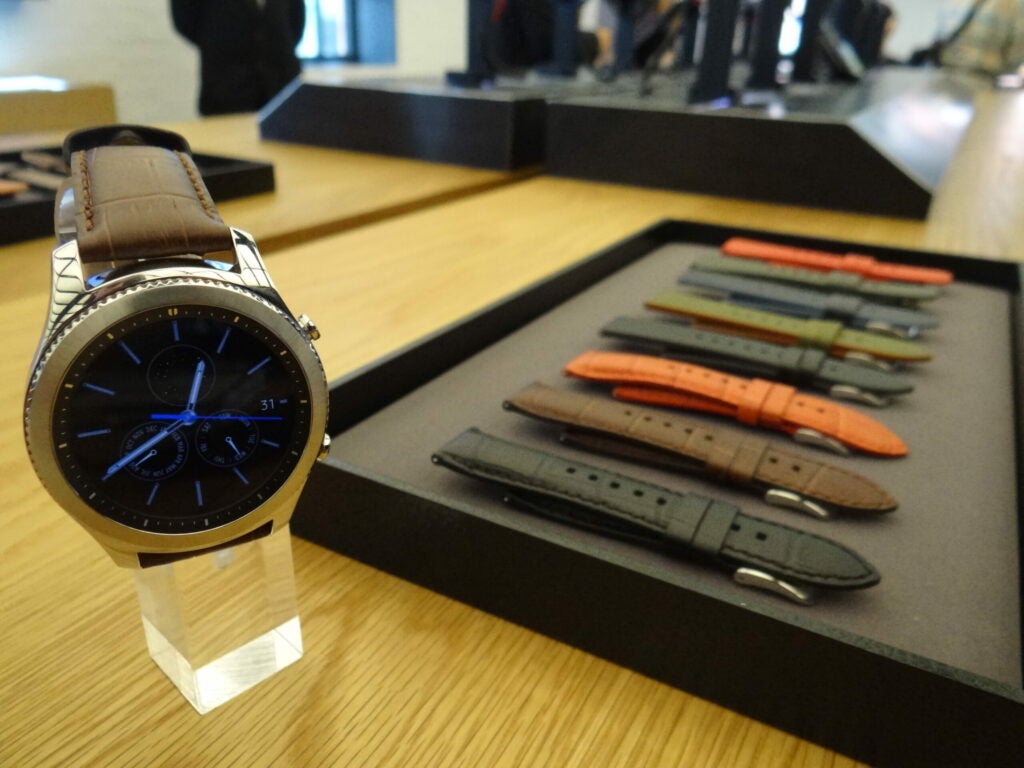 Samsung has worked to design straps to customize the Gear S3.

A lot of focus was put on the design, making sure that it not only functioned as a watch fist, but making it look and feel like one too. With the Gear S3 Classic, the strap is a standard 22 millimeters, which allows you to customize the watch by attaching your favorite strap.

The Samsung team wanted to make sure that the Gear S3 was a timeless and respectful piece, but also a durable watch. The new watches are more water resistant, and gorilla glass makes the face scratch resistant, though smudging does still occur.

Samsung hasn’t announced an official release date, nor any pricing, for either Gear S3 models. But the company assured reporters that the watches will be made available for the winter holidays. Based on the short demo that I got in New York City, this is definitely a fun, functional gadget to keep on your radar.