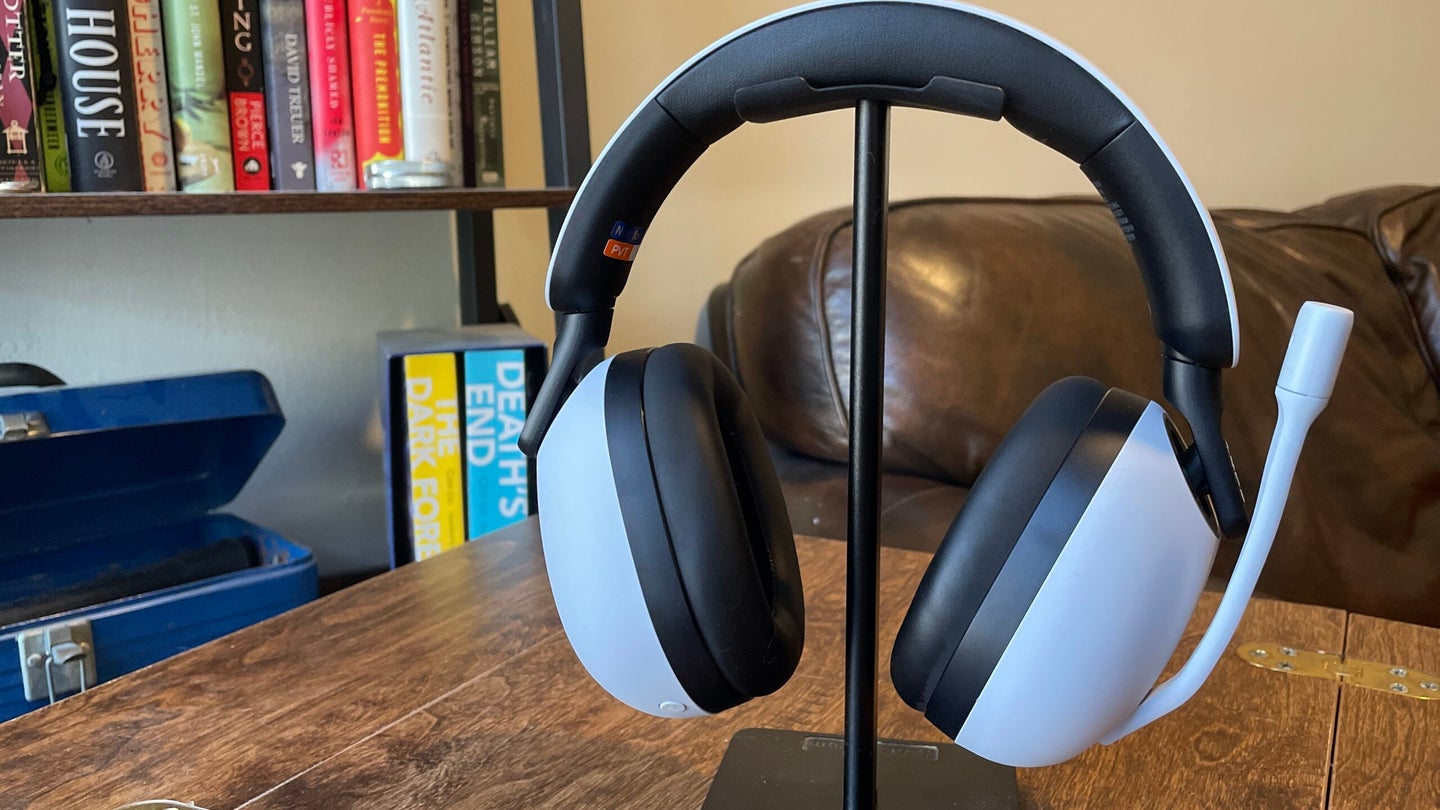 Earlier this year, Sony unveiled a new PC gaming sub-brand called Inzone, with a line of “H”-series gaming headsets and “M”-series gaming monitors. Unlike PlayStation gear, which always revolves around the company’s beloved consoles, the Inzone gear also performs for PC gamers and has features that are only accessible through a Windows configuration app. The Sony Inzone H9, the most expensive of three headsets in the line, is a wireless model awash with high-end features, including active noise-canceling (ANC) and fast-charging, which are criminally underused in gaming headsets. Despite its strong specs and flash, it falters on some gaming headset fundamentals, which are hard to ignore in a high-end gaming headset.

Ironically, the Sony Inzone H9 looks like a PlayStation 5 gaming headset. The stark combination of white matte plastic, accented with black plastic and leatherette-covered padding mirrors the contrast-heavy design language of the latest Sony console. Whether you use them with a gaming PC or a PS5, though, the H9 is certainly style-forward, especially with its elegantly implemented ring-shaped indicator lights. It isn’t that far from typical gaming headset design, but distinctive enough that you’d never mistake it for something else.

Weighing 11.57 ounces, it’s on the heavy side compared to other headsets, but not so much that you really feel the weight over time. With only the lightest amount of clamping force, it may wiggle a bit if you shake your head but moves far less than you’d expect in regular use.

The large, foam-padded ear cups give your ears plenty of room to breathe. In the closed-back cans, 40mm Neodymium drivers are par for the gaming headset course. Between uses, the earcups rotate to lay flat on your chest or a table, which is a common, but always-welcome flourish.

Around the earcups, the H9 offers a robust but strangely implemented set of onboard controls. On the left cup, you have a volume roller, noise-canceling/ambient mode button, and a USB-C port for charging. On the right, you get a dual-rocker for adjusting game/chat audio balance, a Bluetooth pairing button, and a power button. The range of controls is great but their positioning is not, particularly on the right earcup. The power button is near the front of the right earcup, so turning the headset on and off always feels awkward. Likewise, I found myself running my finger up and down the headset looking for the Bluetooth button when I needed it. There are a lot of controls, so some buttons can’t be perfectly placed, but the design doesn’t prioritize the most frequently used buttons, which is a problem.

The H9 features a permanently affixed, flip-to-talk boom mic, which feels like a relic from a bygone age. At this point, most headsets feature detachable wire boom mics, which sacrifice the flip-up-to-mute feature for a more flexible mic that you can almost always position perfectly over your lips. The H9’s mic, by contrast, is easy to position well, but hard to get just right.

To ensure a stable connection with minimal lag, the Sony Inzone H9 connects via a 2.4GHz USB wireless dongle. It also can connect via Bluetooth 5.0, supporting both SBC and AAC codecs so you can pair it with an Android or Apple phone. Best of all, you can connect to two devices at once, and get sound from a phone and a PC or console at the same time. That flexibility can be very helpful in some Discord setups and other niche situations. (Me? Sometimes I like to put a podcast on while I’m playing.) You have to select on the dongle whether you’re plugging into a PS5 or a PC, but doing so allows it to adjust system-level controls like game/chat balance.

For an ANC headset, the H9 gets stellar battery life. According to Sony, it lasts up to 32 hours with ANC off. I found it lasted more than 25 hours on a single charge with ANC on most of the time, which is well above average. The H9 also offers the rare benefit of quick-charging support: Plugged in via USB-C, you can top it off with an hour’s worth of juice in 10 minutes. That’s very helpful if you find yourself ready to play, only to find the headset’s out of power.

The signature feature of the Sony Inzone H9 is its active noise cancellation. Two microphones analyze incoming noise while the headset generates an inverted wave that cancels it out. You find ANC all the time in over-ear headphones and earbuds, which are made for wearing out in the world, but it is still not all that common in gaming headsets, which people use at home most of the time. It’s also a cost-cutting measure for a very budget-conscious product sub-genre of audio gear: ANC requires additional components and software, so they are inherently more expensive.

Here’s the thing, though: ANC is an incredible asset in a gaming headset. The primary goal of game audio is to immerse you in the imaginary world on-screen, and ANC minimizes exterior distractions that may prevent it from doing that.  It can block out the low hum of an air conditioner as an orchestral score swells, or keep the loud banging from your neighbor’s home renovations from momentarily distracting you right when an enemy is about to attack you from behind. It makes sense that ANC is a luxury feature, but it is surprising that you don’t see it more in the $300-$500 “audiophile-grade” tier of headsets.

If you’ve ever used any of Sony’s high-end headphones or earbuds, it shouldn’t surprise you that the H9 offers excellent noise cancellation. It drowns out more exterior noises and minimizes even loud sirens and construction work into a low drone. It also has advanced features like an ambient sound mode that actually amplifies outside noise for when you want to momentarily stop and talk to someone in the real world mid-session. It isn’t as quite as all-encompassing as some of Sony’s other ANC-enabled gear; It blocks out most of the noise from my air conditioner, for example, but there’s a high, tinny part of it that sneaks through. Still, it goes a long way when you really want to get lost in a game.

The H9’s ANC has an Achilles heel, though. While the listening experience is well-guarded by noise cancellation, the microphone lets plenty of ambient noise through. From the clack of my keyboard to a louder version of that air conditioner whine, the audio I put out was much messier than what was coming in.

The Sony Inzone H9 offers decent, but not excellent sound quality. You’re going to hear all the little nooks and crannies in games with high-precision sound design. You can tell the difference between how guns sound in Call of Duty: Vanguard, and the echoey croak of a zombie-like Clicker in The Last of Us: Part 1. There’s very little track separation, though, so sometimes sounds may get muddled together. You also find mid- and high-end sounds leave a momentary lingering fuzz. In the wider world of audio, especially among gaming headsets, this is the difference between a great headset and an incredible one, but the H9’s high price demands you hold it to a higher standard than an entry-level headset like the PlayStation Pulse.

It does, however, offer very strong spatial audio. In competitive multiplayer games, you can clearly detect the direction and distance of nearby enemies or allies purely by the sound of their footsteps and attacks. Using the Inzone Hub configuration app and the Sony 360 Spatial Sound Personalizer app, you can create a personalized spatial audio profile specifically for your ears. The setup, which involves taking pictures of your ears, is long and fairly janky, but it results in a dynamic virtual surround sound that feels perfectly tuned for games, without disrupting how your game sounds.

It’s worth noting that the Inzone spatial audio is one of the features designed specifically for PC users, as it will use the standard (and high-quality) Tempest spatial audio when playing on PS5.

What if I only want it for my PS5?

Since it’s an Inzone headset, not a PlayStation one, there are a few things that you can only use when pairing the H9 with the PC. For PlayStation fans, this may sound annoying, but it’s standard fare for players who have used a headset on PC and PS4 or PS5 before. Using the Inzone Hub PC app gives you extra customization in the form of EQ presets and custom profiles. Dig deep enough and you’ll find more checkboxes for nitty gritty features like customizing the distance and positioning of virtual surround sound speakers, but they’re more for hardcore audio enthusiasts than typical players. Ultimately 90% of what’s great about the H9 (and most of what’s not) applies whether you play on PC or console.

So, who should buy the Sony Inzone H9 wireless gaming headset?

In a vacuum, the Sony Inzone H9 is a stellar gaming headset. It looks good, offers great surround sound, fits comfortably, and offers active noise-canceling. View it through the lens of its hefty $300 price tag, though, and its flaws become harder to ignore. We can’t begrudge Sony the price—like we said, ANC is a feature that raises costs—but there are other models, such as SteelSeries’ Arctis Nova Pro, that offer a more well-rounded experience for a similar price. It’s an excellent start for a new sub-brand, but Sony will need to work out the kinks if it wants its wireless gaming headsets to command the same universal acclaim as its ANC headphones.