The SteelSeries Arctis 9 Wireless has all the right features to stand out, even compared to its "Pro" counterpart. 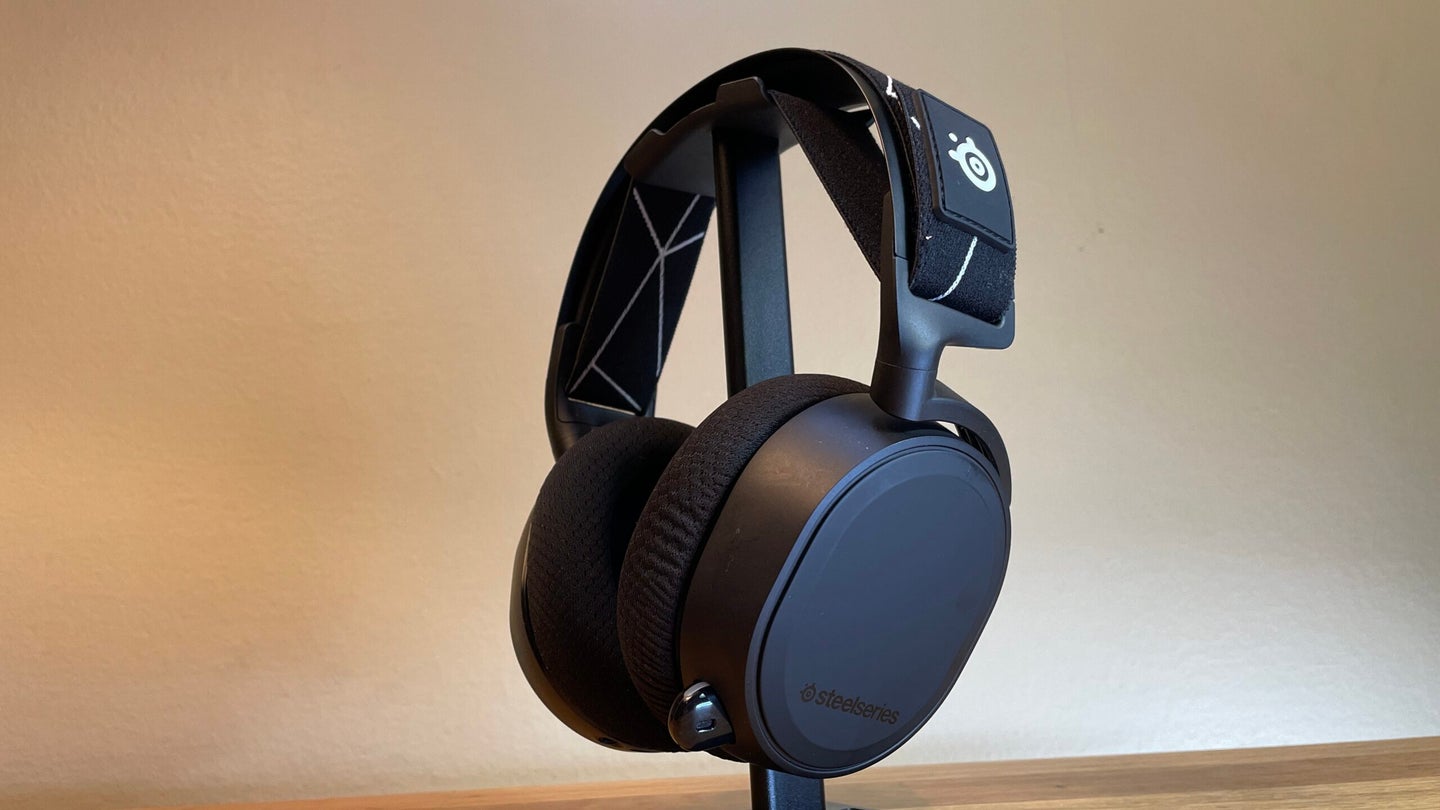 SteelSeries makes some of the best gaming headsets on the market right now. The company’s incredible sound engineering and no-nonsense design have created many, many high-quality gaming headsets with a wide range of features and prices. Among them, the SteelSeries Arctis 9 Wireless stands out for its incredible sound and a well-rounded feature set that makes it particularly attractive for players that split their time between various consoles or even a PC. Though its 2.4GHz wireless connection only works with PCs and PlayStation consoles, the headset also works with the Nintendo Switch and phones via Bluetooth or with Xbox consoles via a 3.5mm analog headphone jack. It isn’t cheap, but the Arctis 9 is an easy investment for players who want something close to a one-size-fits-all gaming audio solution.

SteelSeries Arctis 9!? What happened to Arctis 1-8?

The “9” in SteelSeries Arctis 9 notes its station in the Arctis family, rather than the generation. SteelSeries actually sells seven different Arctis models, some of which feature multiple variants. Technically, Arctis 9 is the second-highest rung on the ladder, behind the much more expensive and feature-packed Arctis Pro.

For reference, here’s an abridged list of the active headset designs from SteelSeries’ Arctis series as of fall 2021, listed from most to least expensive:

Some of these, including the Arctis 9, are specifically wired or wireless headsets. Others, like the Arctis Pro and Arctis 1, have wired and wireless variants.

As the headset near the top of the food chain, but not quite the apex predator, the Arctis 9 has most of the core features you’d expect from a high-end gaming headset, without some of the most extravagant luxuries. At $199.99, it’s relatively expensive compared to other high-end gaming headsets, which might lead you to expect some flashier features, like those you’d find on the Arctis Pro. The Arctis 9’s essentialist approach isn’t devoid of special features, though, and the core elements—its sound quality, its microphone, its industrial design—feature small flourishes that prove worthy of its higher price.

The SteelSeries Arctis 9 headset has a simple, classic look that exudes quality. The full metal and plastic frame is black, save for some white accent stripes on the elastic top band. The cans are made from smooth, matte plastic. Its memory-foam ear cup padding is coated with SteelSeries’ proprietary “airweave” fabric, which is surprisingly thin and velvety. I generally prefer synthetic leather ear cup padding, as it’s less scratchy, but the fabric doesn’t only start to feel irksome when you’re sitting in a hot room, which is better than most.

Weighing 13.30 ounces, the SteelSeries Arctis 9 is, frankly, pretty heavy. To compensate for that, it features a self-adjusting suspended or “floating” headband. Rather than cushioning the metal frame, the Arctis 9 features an elastic band that stretches when you put it on, dispersing the weight across your head so you don’t feel the pressure. Despite its relative heft, the Arctis 9 doesn’t start to weigh your head down or otherwise feel like a burden during long gameplay sessions.

The SteelSeries Arctis 9 wireless headet has a fairly standard selection of onboard controls and ports. Stacked on the back of the right ear cup, it features a volume wheel, an XL mute button, Bluetooth pairing button, power button, a micro-USB port for charging, and 3.5mm headphone jack to enable wired listening. On the left ear cup, there’s a second wheel for adjusting the balance between game audio and chat.

One thing worth noting: The Arctis 9 supports wired listening via analog audio but doesn’t come with a male-to-male 3.5mm headphone cable, which you’ll need to plug the headset into a controller. With the Arctis 9 billed as a wireless headset, it makes sense that wired listening is a low priority. Still, it would still be nice if the headset came fully functional for every platform out of the box.

Let’s talk about the microphone

The SteelSeries Arctis 9 looks like a conventional headset microphone but veers from the pack in many ways. The bidirectional noise-cancelling mic prioritizes the sound of your voice over sound coming from other directions. My voice quality in self-recorded microphone tests was very clear, with very little ambient noise coming through.

Like most gaming headsets, the microphone is attached via an adjustable wire boom, which is effectively an extra-thick cable. Where most headsets give you the option to remove the microphone, the Arctis 9’s is retractable, so you can push it back into the headset when you aren’t using it. Though the difference between a retractable and detachable boom seems insignificant, extending and retracting the microphone is faster than attaching and detaching, and the ability to move the mic out of your face without taking it off reduces the chances of you losing an extra part.

Wireless connectivity is one of the Arctis 9’s many strong suits. Its primary wireless connection, a low-latency 2.4GHz wireless signal, comes through a round USB dongle about the size of a Double Stuf Oreo. The headset features separate connection settings for PlayStation and PC, which you can toggle between using a switch on the dongle.

It also supports Bluetooth wireless, which opens the door to connect with the Nintendo Switch, iOS, and Android devices. As with most devices, Bluetooth imparts a noticeable amount of audio lag, which can be distracting for games that require precise timing and/or rely on audio cues. That said, the Bluetooth connection is very stable, even in an environment with lots of Bluetooth signals, so it’s generally useful and stable for more casual play.

Here’s where things get interesting: The 2.4GHz and Bluetooth wireless connection have separate pairing processes, which allows you to pair one device over Bluetooth and one device over 2.4GHz wireless and listen to them simultaneously. You can connect your PS5 and a phone, allowing you to chat with friends over Discord while you play a PS5 game. (Or you can live the dream like me and listen to a podcast while you’re playing a game in the same headphones.) This isn’t a unique feature but it is still relatively new, and a very nice touch for players who either want to jump back and forth between console or PC and a phone, or who need a dual-audio solution.

When you talk about wireless connectivity, you also have to talk about battery life. In the Arctis 9’s case, that’s a pleasant conversation. According to SteelSeries, it should last through up to 20 hours of gameplay on a single charge, which is in line with the high-end of the industry standard. My testing found similar results, though you can expect slightly less time when using the 2.4GHz wireless, versus Bluetooth.

In my mind, the SteelSeries Arctis 9’s soundscape embodies the platonic ideal of how a gaming headset should sound. Gaming headsets have long held a reputation for generally overly bass-heavy audio. The Arctis 9 doesn’t attempt to subvert those expectations: It is bass-forward, for sure. However, it manages to achieve deep bass while delivering clean, clear sound across its range.

In both Call of Duty: Black Ops Cold War on PC and the Call of Duty: Vanguard beta on PlayStation 5, the Arctis 9 produced deep, textured explosions from grenades and rocket launchers, creating the roller-coaster-esque booms. The difference between the thud of a bullet’s impact and the sweet, high ping of it whizzing past your head was very clear, and distinct from other in-game sounds.

For my part, strong audio separation is the quality that separates a good gaming headset from a great one. Games often produce a lot of messy audio situations, where music is playing, but also someone is talking, and maybe some is also shooting a gun or using some kind of special ability that makes a lot of noise. The Arctis 9 can generally play all those different sounds at the same time without any of them bleeding into each other.

Listening to podcasts and music, the sensation is similar. In Dua Lipa’s “Love Again,” you can clearly hear and focus the different instruments that comprise the track. In “Blue in Green” by Miles Davis, you can close your eyes and follow the drums playing softly in the background. Its clarity extends beyond making sure the primary sound is legible and ensuring the little details are present as well.

What about surround sound?

In the tail-end of the last console generation, simulated 7.1 surround sound has become a de facto standard for premium headsets. At launch, the SteelSeries Arctis 9 had what I’d describe as an imbalanced approach to surround sound, but the rise of the PS5 has corrected the issue, to a degree.

On PC, the Arctis 9 supports DTS:X 2.0, a software-enabled virtual surround sound solution that simulates spatial audio. DTS:X produces clear, smooth surround sound, which is great, but it only works with the Arctis 9 on Windows PCs, which isn’t so great for players on PS4 and Mac. (Most software-based surround sound emulation that I’ve seen requires either a USB wired or 2.4GHz wireless connection.)

For PS5 players, the issue is more or less resolved because the new console features hardware-enabled “tempest” spatial audio. So while the Arctis 9 is, in effect, a PC-first product, the PS5 brings its own to compensate. In playing games on PS5, I found that the Arctis 9 leveraged that technology well, allowing you to hear all around, above, and below you without any noticeable hit to sound quality.

So, who should buy the Arctis 9?

The SteelSeries Arctis 9 Wireless offers some of the best sound quality I’ve heard from a headset without any kind of “ultra-high-end” or audiophile branding. Lows, mids, and highs all come in crisp, clear, full-bodied, without any scratchy, fuzzy, degradation around the edges. While it is not a “perfect” multiplatform headset, it is one of the best options that I’ve tried to date. If you’re a PC- and/or PS5-first player who wants a wireless gaming headset that will work, in some capacity, on every console you’ve got, you’d be hard-pressed to find a better option, even for a highish $200.