Apple's Studio Display takes aim at creatives, but a unique set of features make it appealing to a much wider audience. 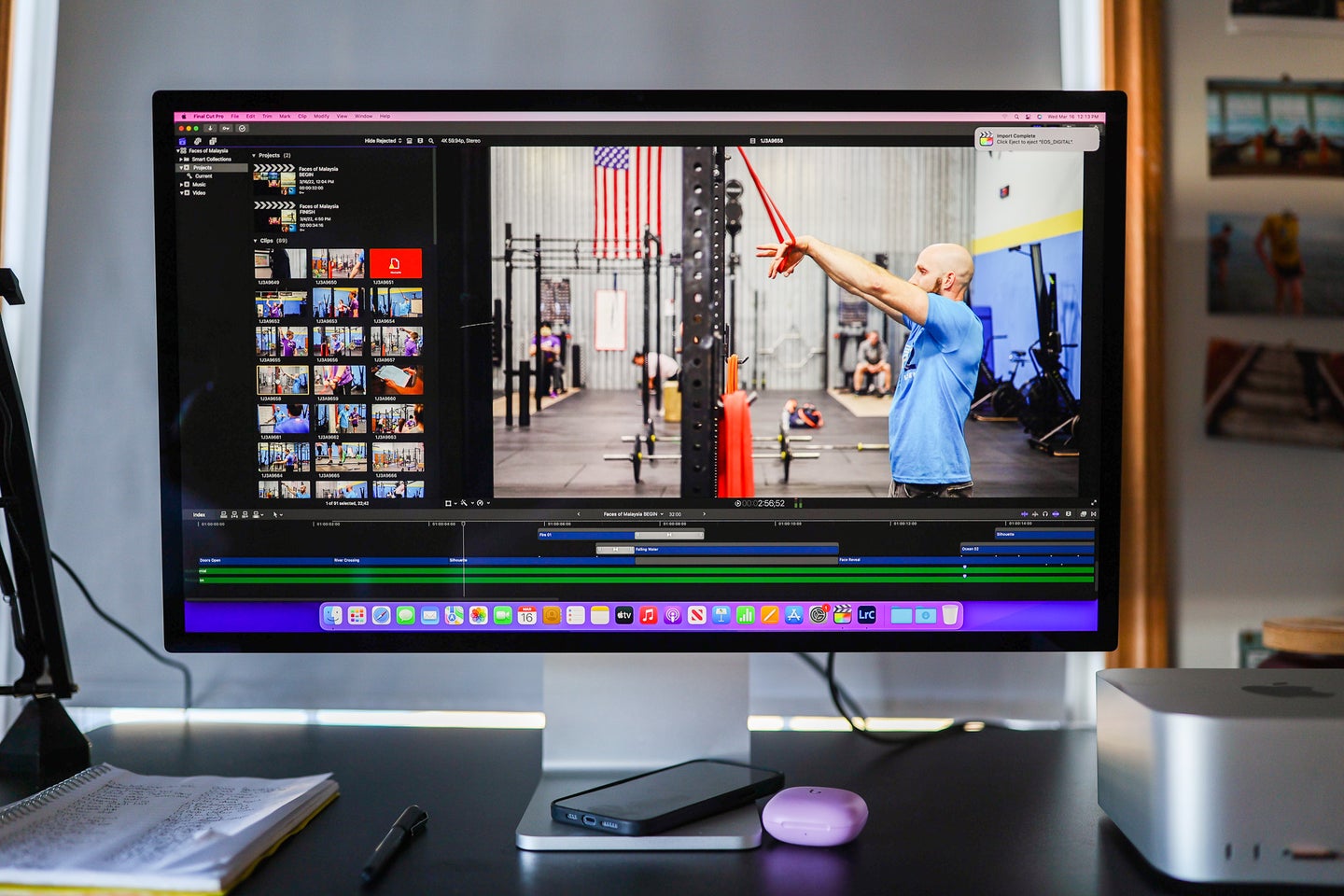 The Apple Studio Display comes out of the box with fairly accurate color. Stan Horaczek
SHARE

At its first product event of 2022, Apple announced the $1,599 27-inch Studio Display as a companion to the beastly new Mac Studio computers. While the Mac Studio takes aim firmly at those in heavy-duty creative work, the Studio Display offers a unique set of features that make it appeal to a wider audience of people who spend their days staring at a screen. It’s true 5K monitors are great for creative work because they allow for lots of space for complex on-screen software interfaces. However, 5K options are still relatively sparse, and good luck trying to find another one with a built-in webcam and a surprisingly decent sound system. The Studio Monitor has a large bag of tricks, which make it an especially well-poised toy to fill a gap for people willing to pay a premium for convenience, precision, and a very pretty on-screen image.

Setting up the Studio Display

Right out of the box, Apple’s Studio Display looks beautiful. Like the M1 iMac, it comes in a clever package that basically falls open as you remove the 27-inch screen from its accommodations. It’s heavy—the model I’m testing weighs just over 16 pounds—and every bit the shiny glass and lightly textured aluminum monolith you’d expect from an Apple display.

My review unit came with the adjustable display arm, which slides up and down in addition to its tilting capabilities. Apple offers a tilt-only version without height adjustment and a plain panel with a VESA mount adapter on the back that doesn’t come with a stand at all.

The adjustable stand on our review unit feels as polished as you’d expect. Moving the monitor up and down feels expensive; it’s like raising the door on a supercar. It has the right amount of resistance and silently moves in a way that makes it obvious that you’ve paid a lot for the privilege.

While the adjustable arm works very nicely, make sure it’s the option you want. Unlike most monitors, you can’t remove the panel from the stand and use a mounting arm unless you choose the standless option. My desk setup is slightly weird thanks to my standing desk setup, but I would have liked to be able to bring the screen down even farther. At its lowest setting, it sits 4.5 inches off the desk’s surface and ascends to 8.5 inches at the top.

The stand-mounted options also don’t offer any horizontal screen rotation, so if your desk isn’t totally level, you can’t compensate for it by rotating the screen. You’ll have to actually level your desk. I would personally probably buy the VESA mount option and use a flexible arm, but again, that’s mostly due to my weird desk arrangement.

Getting started with the Apple Studio Display

Connecting the Studio Display is simple assuming you’re using a new-ish Mac or a computer with a compatible Thunderbolt port. It comes with a single 3-foot Thunderbolt cable, which works fine for my setup, but may be too short if you’re trying to connect to a computer that’s sitting on the floor below your desk. Both the connection cable and the power cord feel posh, though. They’re wrapped in fabric like the power cords that come with the latest MacBook Pro computers.

At 5K resolution, everything looks exceptionally crisp—from text in a document to images and movies. I didn’t notice any light spilling out from around the edges as you’ll sometimes get with other monitors. Apple isn’t using any advanced local dimming tech here—that’s reserved for the much more expensive Pro Display XDR. The 600 nits maximum brightness is enough to make you squint at a blank white Google Doc in a dim room. I found myself keeping the brightness at around two-thirds most of the time, even with the window behind the screen backlighting the display.

Studio Display as an everyday monitor

Though the Studio Display was clearly designed with creatives in mind, it also has features that are clearly aimed at productivity and office work. It has a built-in wide-angle webcam with Apple’s Center Stage, which can track you as you move around the frame. The image quality is passable but certainly not mind-blowing. When testing the Studio Mac, having a work-ready webcam ready to go absolved me from having to find, plug in, and troubleshoot my external webcam. If you want high fidelity, though, you’ll still want to go with something dedicated. The display has a built-in array of three microphones, which sound very similar to the mics in the most recent MacBook Pro. You won’t be doing voice acting work with them, but you also won’t have people on your Zoom calls asking you to repeat things.

I used this setup for a bevy of video calls this week and found that its overall performance was very close to what I get out of my 16-inch MacBook Pro. Its dynamic range or overall picture quality didn’t blow me away but I was relieved to find that I didn’t have a single issue with video or audio. This only works because the Studio Display has an A13 Bionic chip inside of it. That’s the same chip you’d find in the iPhone 12 or the previous model of the newly refreshed iPad Air. The chip enables those clever features regardless of what machine you’re using, which is handy.

The built-in speakers performed similarly well. They’re no substitute for a dedicated sound system or even a good pair of headphones, but the built-ins produce enough volume that the max setting was as loud as I would ever need for my small office. It would be plenty loud enough to earn yourself a call with HR if you try to use them in a shared office.

If you’re truly looking for color supremacy in an Apple Monitor, you’ll want to look toward the $5,000 Pro Display XDR, which promises meticulous tones across a super-wide color space. The Studio Display certainly holds its own, however. Out of the box, the colors look vibrant and rich, though I could tell they were going to run a little cool once I calibrated it. That’s very typical of Apple displays in my experience. My MacBook Pro looked basically identical.

I ran a calibration cycle with a Datacolor Spyder 5 Elite and the device agreed with my assessment. The calibrated image looks slightly warmer and more natural. It’s close enough that the average person could never calibrate the display and be just fine. Even for creative work, it wouldn’t be much of an issue unless you’re regularly working with processes that require careful color management.

Of course, all of this doesn’t mean much if you’re not worried about color and you turn on Apple’s TrueTone function, which adjusts the monitor’s color temperature to look its best in unison with your room’s ambient light. Since I do a lot of creative work, I turn it off.

Apple’s anti-reflective coatings also impressed me. I have a window directly to the side of my desk and it can sometimes wash out the image on my other monitor (a mid-level Viewsonic with built-in color management tools). The Studio Monitor’s high brightness settings and anti-glare coatings keep things looking contrasty.

Why no high refresh rate?

It would have been fantastic to see Apple’s TrueMotion high-refresh-rate tech built-in but Apple opted for the 5K resolution instead and I think that’s the right call. The 5K screen is very handy for working in multiple windows next to each other or for working in a program like photo editor Capture One Pro, which places toolbars all around a central image. That extra resolution makes a big difference in those scenarios. Also, 5K at 120Hz would go beyond the capabilities of a single Thunderbolt cable.

So, who should buy the Apple Studio Display?

At $1,599, the Apple Studio Display isn’t a cheap monitor. In fact, you can get excellent monitors with many of these features for well under half that price. The Studio Display offers a high-quality package of features, including a usable webcam and speakers, which is relatively rare among monitors. It’s ultra-simple to set up and you don’t need to build a home studio to take video calls. Its color reproduction is accurate and expansive enough for the vast majority of people, even if they do regular creative work. It’s expensive, but so is basically everything Apple makes.

If you take the plunge, I think the VESA mount version is the model to buy. It’s the same price as the tilt-only version but it’s $400 cheaper than the $1,999 height-and-tilt version I tested for this review. You can get a very fancy monitor arm with enough money left over for a fancy first-party Apple monitor cloth for that much cash.