The new iPad Air features a powerful M1 chip, making things run smoothly so you don’t have to think about “performance.” 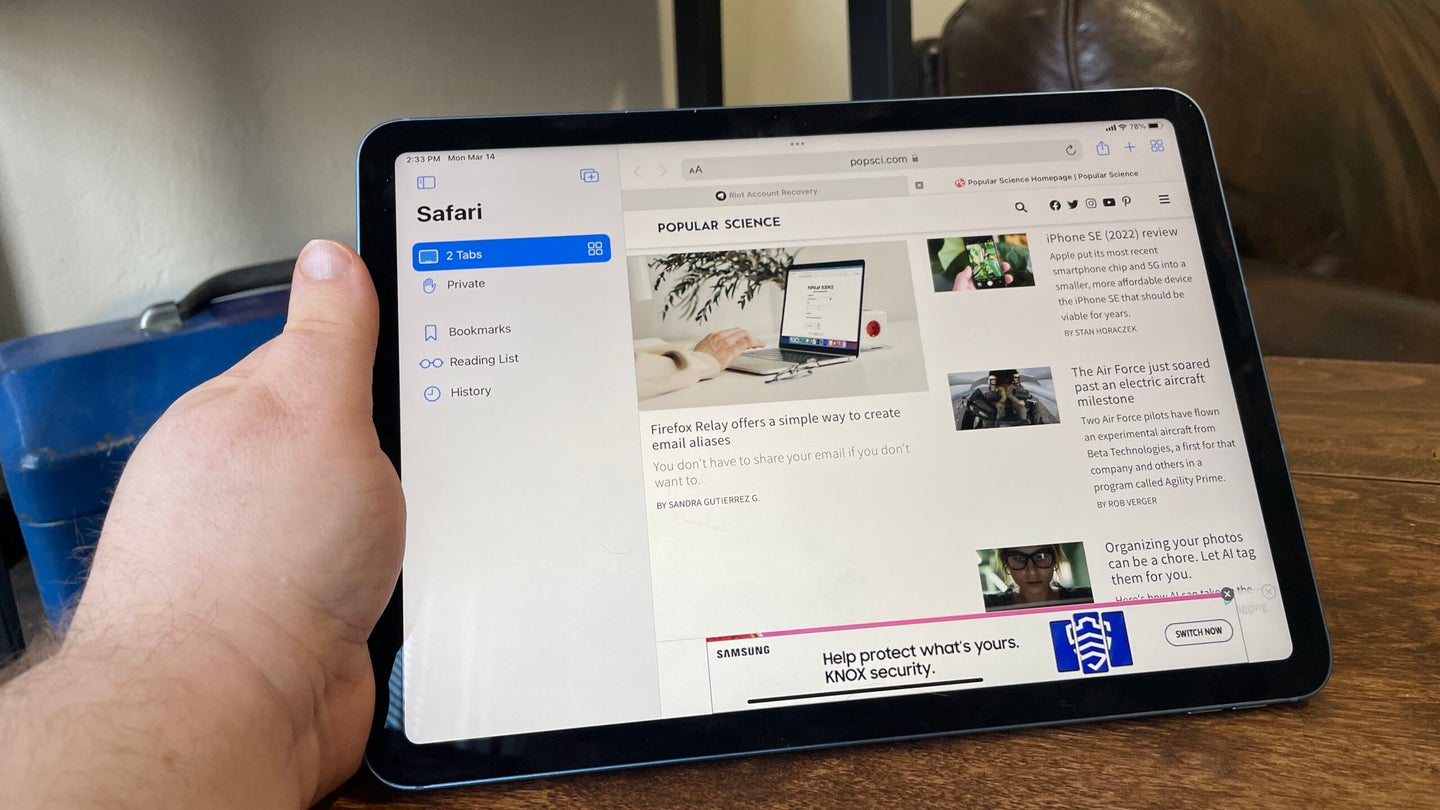 I’m not sure if this is a controversial statement but, to me, the Apple iPad Air is the “default” modern iPad. Part of that comes down to price: The original iPad base model cost $499 back in 2010. The current vanilla iPad costs $329, and the base model of the new iPad Air costs $599. It is also, however, a reflection of the feature-set and what the iPad Air can do. If the iPad is a handheld screen meant primarily for Netflix and email, then the iPad Air can facilitate a wider range of hobbies, like making home videos in iMovie, drawing, and playing games.

With that in mind, the new iPad Air, the fifth of its name, is something of a technical spectacle. It features one of Apple’s bespoke M1 chipsets like the ones used in modern Macs and the iPad Pro. Combined with a small set of nominal, but clutch upgrades—including 5G support and a new front camera—the M1 gives the iPad Air a concentrated performance boost that should impress anyone looking to create video or audio content, or do everyday computing. It certainly goes far enough to retain its title as one of the best tablets around.

Like its predecessors, the latest iPad Air features a remarkably sharp 10.9-inch LED Liquid Retina display. Tablets are all screen, so the display, which features P3 wide color and HDR support, is still a feast for the eyes. Other core specs, like its Touch ID-enabled power button, estimated 10-hour battery life, and 12MP rear-facing camera, have returned in familiar form.

The biggest change in the new iPad Air, the one that will make or break your interest in it, is the processor. Apple has replaced the mobile-facing A14 Bionic with the proprietary M1 chip–similar to the ones used in the current Mac Mini, MacBook Air, and iPad Pro. The iPad Air (2022)’s M1 chip features an 8-core CPU, 8-core GPU, 8GB of shared system memory, and an Apple neural engine, which powers machine-learning features. According to Apple, the M1 chip improves the iPad Air’s CPU performance by a whopping 60 percent and doubles its GPU power. That math doesn’t translate so well to change you can see and feel, but you can see that most apps run incredibly smoothly, particularly those more demanding creative apps for drawing like Penbook, or image editing like Adobe Photoshop, and games like Genshin Impact.

The impact of the M1, in some cases, gets hamstrung by the lack of other features and support that it needs to take advantage of the processor upgrade. There are still plenty of iPhone-only apps that run with bars on the side and look pixelated because they aren’t meant for the larger iPad screen. Unlike the iPad Pro, the iPad Air (2022) does not feature Apple’s “ProMotion” variable refresh rate in its display and you can feel its absence. Some apps with a lot of motion—games like Teamfight Tactics, and Twitter on a boring Saturday afternoon—still stutter from time to time. It’s a small blemish, but one that’s far more noticeable than a lot of the gains you’ll get from other apps, which may simply load a bit faster or scroll more smoothly.

Beyond the M1, the hardware changes to the new iPad Air are mostly situational and focused on speed. The USB-C port can now transmit data at up to 10Gbps, twice as fast as the previous iPad Air. This opens the door for faster transfers to external hard drives and the ability to pair with a higher-resolution external monitor. The iPad Air (2022) also now supports 5G sub-6GHz, allowing for faster broadband speeds if you purchase a mobile broadband-compatible model.

Video call from the couch

Since video calls are still at top of mind for most of us, the new iPad Air’s front camera upgrade may be its most noticeable new feature. It now has a 12MP ultrawide camera in front with a 122-degree field-of-view, which allows for a much sharper picture in video calls and unlocks “Center Stage,” Apple’s version of AI-powered auto-framing for video. Using the wider field-of-view, the iPad will automatically “shift” the camera to follow any faces in shot, keeping the focus in the right place.

This may feel like something of a coup for older iPad owners: Since the front-facing camera is on the “top” of the iPad, near the power button, the webcam actually sits to the side of the screen when taking a video call in landscape mode, which leaves you looking off-kilter. With Center Stage, your face is always in the center of the frame, so there’s no aesthetic downside to taking a call on the iPad … so long as you set it at eye level.

Last, but not least, Apple has switched up the range of color options for the new iPad Air. In keeping with the color convention released with the iPhone 13 and the 2021 iPad Mini, it comes in Starlight (off-white), Space Gray, Pink, Purple, and Blue (pictured).

Unless you’re very serious about computational performance, there isn’t a signature feature in the iPad Air (2022) that’s going to make you crave it. That said, if you’re in the market for a new tablet, basically for any reason, the new iPad Air should be your go-to. The iPad Pro is probably the superior machine, especially if you plan to use it primarily for games or as a laptop replacement at work, but the Air does everything from playing games to content creation to web browsing and word processing, seamlessly. Frankly, it can even handle the basics of a work-from-home job, especially when paired with Apple Magic Keyboard iPad cover.