Let’s Get Rid Of 16:9 Laptops Forever 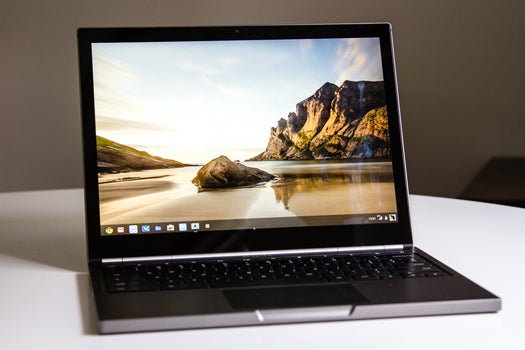 The latest laptop to cross my review desk (it’s just my regular desk, I don’t have two desks) is the Chromebook Pixel, Google’s ultra-premium new laptop, just released this week, which is a very curious device indeed. It’s beautiful and well-made, but it runs Chrome OS, which, while surprisingly capable, is really nothing more than a web browser. It is a difficult thing to review because it’s great, but wildly overpriced given its capabilities–the reviews of the Pixel tend to be glowing, until the last sentence, which is “Oh, and nobody should buy this laptop, because it costs $1,300 and can only run one program.”

I’m not going to buy a Chromebook Pixel, but I absolutely hope that laptop manufacturers start taking a cue from one of the more unheralded innovations the Pixel brings to the table: its aspect ratio.

The standard aspect ratio for laptops these days is 16:9. (MacBooks are 16:10.) And that makes no sense, because 16:9 displays are exclusively designed for watching video.

Until 2009, personal displays were more square, with ratios around 4:3; wide displays could really only be found in movie theaters. But then came the dominance of digital video. DVDs were standardized at a 16:9 ratio. HDTVs soon followed, as did high-def television, streaming video, and Blu-ray. And our portable devices mimicked this, wanting to show off beautiful video now that it was available. Laptops, then smartphones and tablets all went 16:9. (Major exceptions being the iPhone, which until recently was 3:2, and the iPad, which is 4:3).

It makes sense that your HDTV has a 16:9 display. But your phone? When was the last time you watched a movie on your phone? I think a more square screen, like the Chromebook Pixel’s 3:2, is a superior aspect ratio for laptops.

There was a time when we needed to use laptops to watch all of the online video content that’s quickly taking over, like Netflix, Hulu, Amazon Prime, YouTube, and HBO Go. But not anymore! Now it’s easy and cheap to beam that stuff up to a real TV–you can pick up a Roku for $50, and get access to all of that video content on the kind of screen that can really do it justice. And it’s not like a squarer screen can’t play video. Sam Biddle over at Gizmodo, though he makes other nice points, calls out the Pixel’s screen’s aspect ratio–but his only complaint is that videos will look “bad.” And in fact they don’t! There’s a slight letterbox, sure, but it’s hardly unwatchable, and it’s not even unsightly. It’s also not smaller; the Chromebook Pixel has just about the same display width as a 13-inch laptop, so videos aren’t chopped smaller.

And don’t forget what you gain here: video is a very minor part of what we do on our laptops. Web browsing, for example, is a far more common activity, and the taller display on the Pixel works perfectly with web pages–because they scroll up and down. You get 18 percent more vertical space in a 3:2 display than you would in a comparably wide 16:9 display. That means you can see more of the internet. You scroll less. It just makes sense. This holds true for editing documents and spreadsheets, viewing photos, and all kinds of other non-video-related things you do with your computer. Why are we designing our laptops around a relatively minor feature?

So, laptop makers: bring back the squarer screen. 16:9 is designed for watching videos, so let’s keep that aspect ratio on those displays where we primarily watch videos. For our laptops, let’s make sure the screen is designed to handle what we actually do with laptops.