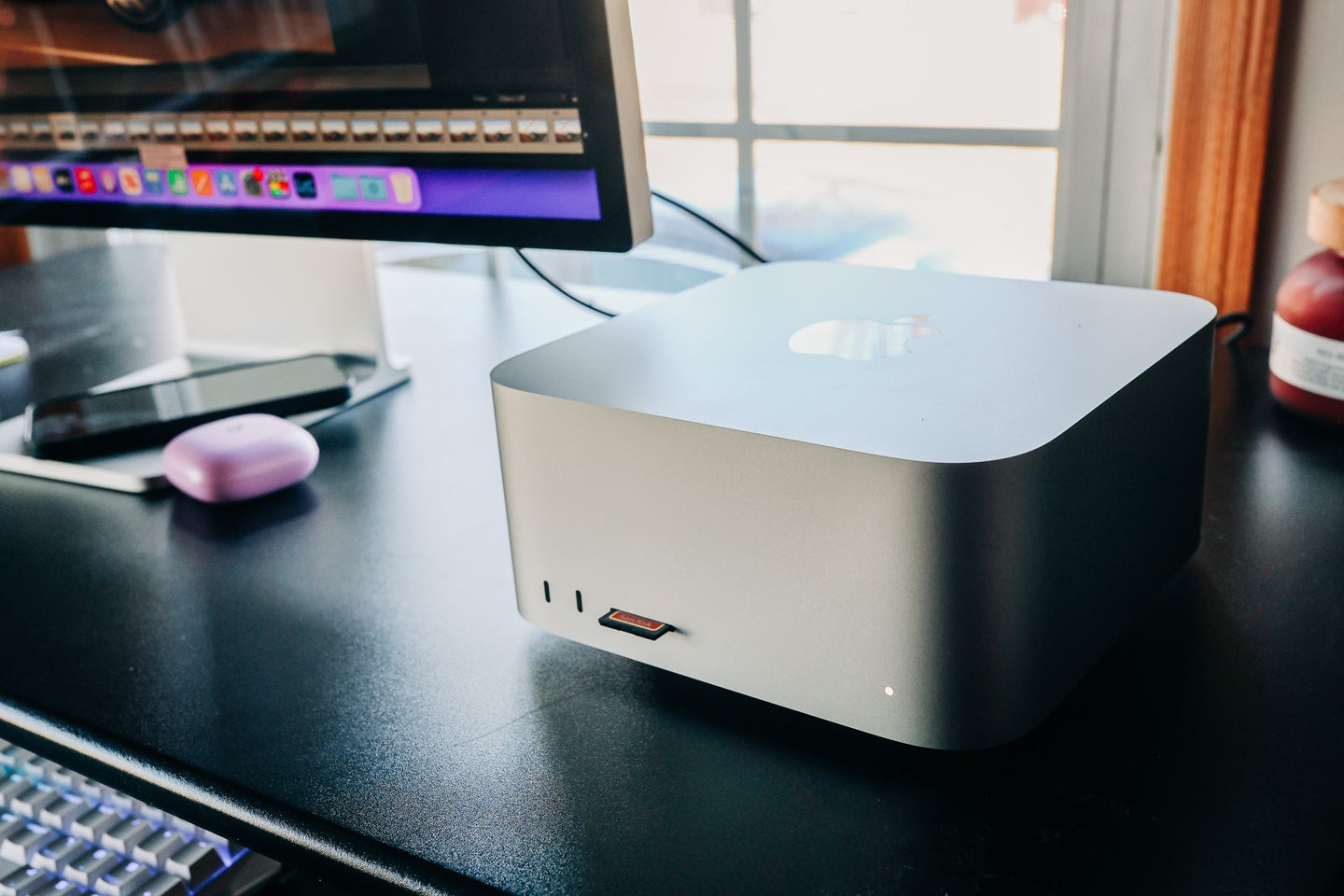 Apple’s M1-series chips have evolved and spread through the company’s Mac and iPad lineup since their debut back in 2020. They have been getting more powerful along the way, which had many people wondering what the high-end desktop version would look like. At its first product event of 2022, Apple announced the Mac Studio, a promising machine that sits in the wide space that existed in its old lineup between the plucky Mac mini and the beastly Mac Pro workstation. I have been reviewing the Mac Studio with an M1 Max chip inside for about a week and it’s clear that, even without stepping up to the M1 Ultra chip, the Mac Studio is a monstrous creative engine.

I’ve been testing a Mac Studio in a configuration that’s actually pretty close to what I would buy for my professional photography and video work. It has the upgraded 32-core GPU, 64GB shared system memory (up from the base of 36GB), and 2TB of built-in storage. Paying $600 extra dollars to go up to 2TB of built-in storage stings, but a 512GB SSD inside a machine built for intense creative work feels particularly puny. All told, that puts the price of this machine at $3,199. That’s about $1,000 less than a very similarly spec’d 16-inch MacBook Pro and roughly half the price of Apple’s cheapest Mac Pro tower.

Setting up the Mac Pro

The Mac Studio looks like a scaled-up Mac mini. It’s a stumpy, 6-pound aluminum monolith with an SD card slot and a pair of 10GB/s USB-C ports on the front. The back of the device presents an arsenal of connectivity, including four Thunderbolt 4 ports, two USB-A ports, an HDMI, a 10GB/s ethernet, and a 3.5mm headphone jack. Apple offers specific wireless accessories, including the Apple Magic Keyboard and a slick black Apple Magic Touchpad, but I opted to use my typical setup since that’s likely what I would do if I was buying a Mac Studio for my workflow.

Having used big workstation machines before, the small form factor really does make the Mac Studio feel impressive. I simply plunked it on my desk, plugged it in, and it was basically ready to go. Because I paired it with the Apple Studio Display, I didn’t need to worry about speakers or hooking up an external webcam. It was easy.

I have been working as a professional photographer for roughly a decade and a half, and I’ve added some video work into my process in recent years, so I spend a lot of time in front of editing programs like Capture One Pro, Adobe Lightroom, Photoshop, and Final Cut Pro. Our review unit shipped preloaded with almost all of these, so I could quickly get a feel for how it deals with my typical media workflow.

I loaded a set of 45-megapixel raw files from my Canon EOS R5 into Lightroom, which is notoriously resource intensive, and the Mac Studio chewed through the import and preview-generation process without hesitation. I typically use a slightly upgraded 16-inch MacBook Pro with an M1 chip inside and the Mac Studio was tangibly (and perhaps predictably) snappier in every regard. The preview image instantly refreshed as I scrubbed through thumbnails without the occasional stutter I’m used to on a MacBook Pro. I still have no complaints about my regular machine’s performance, but the Mac Studio is a clear step up. If editing was my full-time gig, that would be a difference I’d be willing to pay for.

I threw some massive TIF files of medium format film scans at the Mac Studio and ran them through the great-but-often-laggy Negative Lab Pro plug-in and felt a similar small-but-noticeable increase in efficiency. The same goes for exporting full-res images. If you’re doing photography work, the M1 Max Mac Studio is likely as much power as you’d ever need.

From a processing standpoint, photography is probably one of the simpler tasks I could ask the Mac Studio to complete. Video is another story. Apple shipped our review unit with a sample Final Cut Pro project loaded with UHD video. If you’ve ever edited video on a consumer-level laptop, the Studio’s ability to seamlessly scrub through a timeline loaded with high-res clips will feel very impressive. I was ready for it to be smooth, but it was very smooth.

I loaded some 4K 60p video shot with my Canon R5 and the previews were available immediately, even as the beta version of FCP I was using was going through the optimization process. My MacBook Pro sometimes stutters while digesting UHD clips. The Mac Studio didn’t.

Exporting a 4K 60p video at about three minutes long took roughly 38 seconds for a 26GB file. My MacBook Pro took more than a minute.

My video chops don’t involve much in terms of motion graphics or 3D modeling, but it’s obvious there’s still lots of headroom in terms of power here to handle those even more rigorous tasks.

The rest of the Mac Studio experience

I used the Mac Studio as my main machine for roughly a week and didn’t really run into any issues. Despite the fact that the entire top-half of the tiny tower consists of cooling gear, the Studio runs basically silently. Even when I bombarded FCP with 4K 60p video clips with the intention of taxing the hardware, it stayed pretty much silent.

The tower sits on an aluminum base and it slid fairly easily across my laminate standing desk. I was expecting a slide-resistant rubber base as you’d find on the HomePod mini but, instead, it glides across the desk with a push. That makes plugging peripherals into the Thunderbolt 4 ports on the back simpler.

Despite having more ports than most Mac lovers could ever dream of, I am slightly jealous of the M1 Ultra users who get Thunderbolt 4 ports on the front of the machine as well. The M1 Max machines are limited to 10GB/s USB-C connections on the front.

We’re not a benchmarking site, so if you’re looking for hard numbers and graphs to compare speed performance, there are a ton of great resources out there that I’ll be reading too. I did run the Mac Studio through Cinebench’s multi-core CPU tests, though, and it scored in the 12,000s, which puts it well above any Intel Core i9 machine, but below the truly absurd Threadripper workstations. That’s basically what you’d expect out of a system like this, which draws much of its overall performance from its system efficiency instead of brute force power.

So, who should buy the Mac Studio?

The umbrella of “creative work” has expanded tremendously in recent years. High-end photography and video work like what I do used to tax pricey machines as they chewed through lossless raw files to generate previews and render adjustments. Now, the real heavy tasks involve even burlier tasks like complex 3D object rendering, motion graphics, and animation. Those are the jobs that require the flagship M1 Ultra or a step up to a Mac Pro.

The M1 Max Mac Studio, then, sits in an interesting position. For all intents and purposes, the Mac Studio is noticeably faster than a similarly priced MacBook Pro. Even the base model Mac Studio should havemore than enough power to handle just about everything a photographer, illustrator, or designer could need.

It’s odd to think that the most expensive Mac Studio checks in at $8,000 with all of its stats pushed to the limit. That seems surprisingly affordable, at least when you keep in mind that professional-grade creative workstations can cost as much as a Honda Civic.

If you do work like I do and can swing the upgrade cost, I can recommend this $3,200 configuration. The integrated system memory won’t accept any aftermarket upgrades, so it’s wise to spend the money up front if you can. The extra GPU cores will help futureproof the machine as editing software gets even more advanced down the road. And, yeah, bite the bullet on the extra storage because 512GB just isn’t it.