The original Macintosh, Atari computers, and more innovative machines that arose during the early days of personal computing. 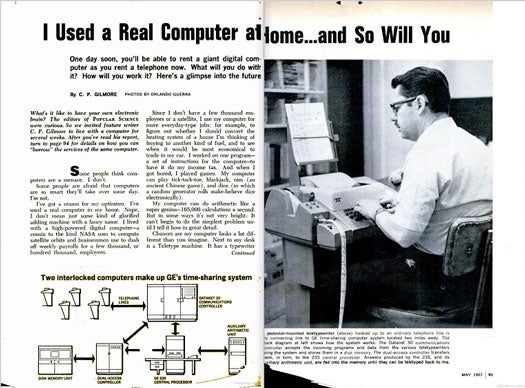 As someone who was born in the year 1986, I belong to the last generation of people who remember life before computers became an everyday necessity. At the same time, I’m too young to recall machines that lacked Internet access, a mouse, and a monitor. Most people my age or younger tend to assume that even the most rudimentary computers contained these elements, but a peek in our archives says otherwise.

In 1967, we invited one of our writers to live with a computer for several weeks so he could understand what the machine had to offer. Since this was during the time-sharing era, his computer looked less like today’s desktops and more like a typewriter (in this case, a Teletype) hooked up to a phone line. Naturally, his report, “I Used a Real Computer at Home….and So Will You” proclaimed these terminals as the next big thing. We have nothing to fear about computers becoming a menace, he insisted. Because eventually, they’ll become inextricable to everyday life.

If there’s one thing we can say about our computer coverage between the 1970s and 1980s, it’s that we made an impressive amount of accurate predictions. First, we insisted that the mouse would become a default addition to personal computers. Then, after watching an MIT professor simulate a driving program on his machine, we became convinced that people would one day store high-resolution graphic programs on discs. When staffers at Time showed us how they could edit images on a computer screen, we predicted that the era of ink bottles would soon yield to the era of digitized pictures and tech-savvy graphic designers.

Just think, twenty years ago, we couldn’t imagine being able to access our online archive within seconds, let alone turn its contents into features for the web.

As we all know today, forerunners to the personal computer look nothing like our machines today. Westinghouse Electric’s “Mechanical Einstein,” which resembled an enormous telephone switchboard, could instantly solve higher mathematics equations that would otherwise take weeks to compute. To use the machine, the engineer would plug in particular wires and knobs to receive the answer. At this point, computers weren’t programmable — if anything, they were more like glorified calculators — but using one beat solving problems with a simple pen and paper.

What’s it like to own a computer? To get a better idea of everything it could offer, we hired writer C.P. Gilmore to live with a machine for several weeks while reporting on the experience. Naturally, Gilmore was thrilled with the device — unlike its predecessors, his machine wasn’t merely a “glorified adding device” — it was capable of handling programs that play games, handle his income taxes, and solve math problems.

This was before conventional computers used screens, though. To use his machine, Gilmore would enter commands on a Teletype hooked up to a telephone line. A General Electric Datanet-30 machine would receive the commands, run the program in a GE-235 central processing computer, and transmit the solution back to the Teletype within seconds. Using time-sharing, Gilmore was able to write new programs and access old ones, including a program that calculated the cost of heating in his house.

The novelty of his device led Gilmore to predict that the future of computing hinged on time-sharing.”It will be far cheaper to build one monster computer with thousands or even millions of customers hooked to it than to have small, individual machines in individuals homes,” he said.

Before we used the World Wide Web, we made do with The Source, an online service that transmitted information to dial-up subscribers. For an initial fee of $100, subscribers would access information by hooking up a terminal to to the modem. Afterward, they would be charged by the hour ($2.75 after 6 PM and $15 during work hours). Our writer found the system extremely convenient because of how quickly he would receive the news. “When Skylab was falling, for instance, I knew where it was before may of the local radio stations,” he said. To access data, all he would need to do was type in a question and await answers on everything from stock market reports, the weather, and shopping services. Subscribers to The Source could even receive online text of magazines, email, and airline schedules, although our writer did note that receiving exactly what you wanted required typing extremely specific questions.

Over time, computers became less intimidating to the common man by becoming accessible to those who weren’t necessarily masters in programming. Here, we reviewed three easy-to-use models: the APF Imagination Machine, the Atari 800, and the TI-99/4, all of which required minimal assembly. Programming them required just a couple days of intense tinkering, while external hardware, such as printers, were as simple to plug in as an electric fan.

A few notes on these devices: The APF Imagination Machine came in two separate components, the first being APF’s MP-1000 programmable video game. While this unit couldn’t accept custom programming, hooking it up with a separate keyboard would transform it into a computer that understands commands. A cassette would give the computer instructions. Meanwhile, the Atari 800 was more expensive, but it could accommodate a printer, tape deck, and up to four disk drives. You could also add more RAM to achieve a maximum of 48K. The TI-99/4 was the flashiest computer of the bunch. Not only could it host the usual add-ons, but it could came with a speaking module and musical capability.

Not surprisingly, we were enthralled by the talking device: “You haven’t lived until your home computer says ‘hello’ and asks you to ‘please enter a number.'”

The early 1980s saw the rise of videodiscs and interactive hardware, signifying a new era of convenient file-saving and game-playing. We visited MIT’s Andrew Lippman, who demonstrated a simulated “drive” through Aspen, Colorado, where you would navigate roads via computer-generated symbols on a touchscreen. A street map, season-switching, and the option to peek into buildings further enhanced the virtual tour. This entire program was stored on optical videodiscs, leading us to correctly predict that they’d become essential storage units for technical data, shopping catalogs, Army training simulations, business presentations.

“They’re smarter. They’re cheaper. And now there are a lot more choices,” we wrote, while considering the influx of home computers. Why the surge in popularity? First, the success of video games and the IBM computer encouraged manufacturers to cash in on the trend by churning out their own low-cost machines. The growing number of computers pressured established makers to update their machines, which in turn convinced office machine makers to upgrade their products by issuing computers. It was a cycle, and one that led to a rise in affordable home PCs. Here’s what you could expect from them in 1982: the inexpensive models came with only a keyboard, so to save and retrieve your work, you’d need to hook them up with a TV. Pricier computers, like the Commodore MAX machine, contained a sound generator and computer graphics that could be programmed to draw charts. If you spent even more money ($2,985, to be exact), you could end up with a high-end machine like he Basic Olivetti M20, a 16-bit computer with 128K of memory.

Forget standing in line at the bank. In the future, you’ll be able to manage your accounts from home. Writer Susan Renner gave home banking a whirl, using an a TV screen connected to an Atari computer to pay a bill to New York Telephone. To use the system, she would prompt the Atari to call Pronto, the home banking service of New York’s Chemical Bank, which presented her with a page of banking options: bill paying, transfers, bank balance, things we can see today on our own browsers. At that point, hundreds of banks were working to implement a similar system for their local clients, but only CompuServe offered nationwide access to the service. People who opted for home banking would have to pay an extra fee, but Pronto users we interviewed assured us that the convenience was worth the price. You could not only check your balance at any time of the day, but you had instant access to previous statements and current statements, which would show you at a second’s notice which checks had cleared.

In 1984, Apple introduced the Macintosh — in retrospect, a legitimately epic moment for computing, we just didn’t quite know it yet. Could the Macintosh oust the IBM PC from its pedestal? We visited Silicon Valley for an interview with Steve Jobs himself, who assured us that Apple would reclaim its number-one status with its new product. Unlike other personal computers, the Macintosh weighed just 20 pounds and came in an unusual vertical frame. The nine-inch gray screen had a resolution of 512 by 342 pixels, while the machine came with a 32-bit microprocessor, a 128KB random-access memory, and a 64K read-only memory.

Operating the Macintosh was a treat, to say the least, thanks to its ease of use. You could point and click using a mouse instead of controlling the screen with keys. You could type up documents using Mac Write without having to enter any complicated commands — simply insert the microdisk, click “new” under the “file” menu, and get working. You could even change the fonts, which was nearly unheard of just three or four years prior. “‘Popular Science’ looks strange in Old English italic,” we noted.

Nowadays, using a computer without a mouse or a touchpad is unthinkable, but computing in the early 1980s was another story. Hence our excitement over the debut of voice commands, mice, tablets, light pens, and touch-sensitive monitor screens. Aside from the mouse, which let people position the cursor three times faster than they could move an arrow key, we strongly vouched for the graphics tablet and the light pen. The tablets turned your computer intro an “electronic doodling pad,” and often came with piano keyboards, colors, and shapes in the form of film overlays. We recommended the KoalaPad, an inexpensive touch tablet that could recognize both your finger and a blunt stylus. As far as light pens go, we recommended the Gibson Light Pen and Tech Sketch, which let you draw complex shapes onto the display. And while (admittedly low-resolutions) touch screens and voice commands were more obscure, they gave a glimpse into our inevitable reliance on alternate input device.

Sophisticated graphic design programs began cropping up in the early 1980s, foreshadowing a shift from print to digital. At the New York office of Time, we watched in awe as staffers used Scitex Vista, a computerized graphics design system, to tweak images on a screen. If a picture were slightly dim or blurry, no biggie; just use the program to manipulate the exposure. These “magical picture machines” would not only save paper, but they would save time since digitized pages could be converted directly into printing plates. Not to mention that it is a lot faster to crop an image on a screen than to snip at it with scissor. “One day, say experts, publishers may bypass the computer-to-paper step, sending detailed images directly into your home for viewing or printout.” Not a shabby prediction on our end.