Remembering Apollo 14 Astronaut Ed Mitchell In His Own Words 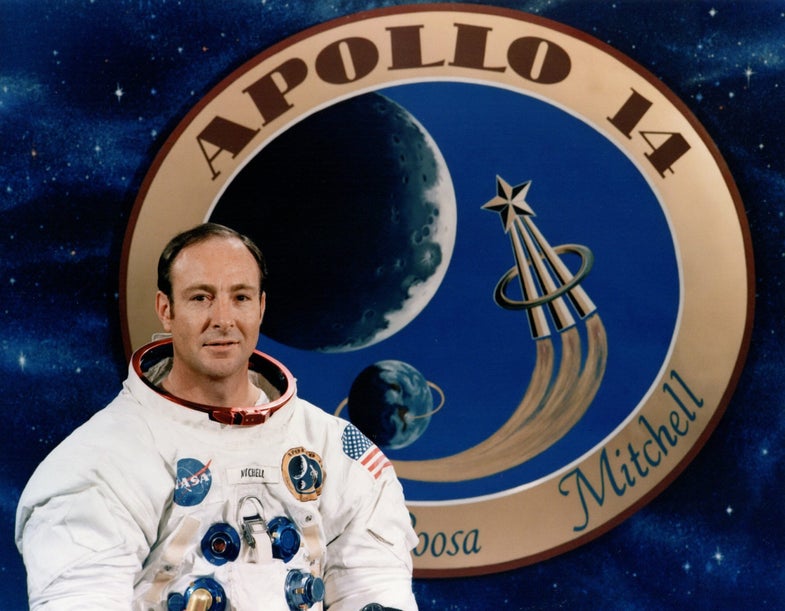 Ed Mitchell was one of the men chosen to join NASA’s astronaut corps as part of Group 5 in April of 1966. He was on Apollo 9’s support crew, then the backup Lunar Module Pilot on Apollo 10, which put him in line to fly on Apollo 13. Of course, the mission’s Commander Al Shepard had to slip to a later flight when his Meniere’s flared up, so Mitchell ended up on Apollo 14. On February 5, 1971, he became the sixth man to walk on the Moon.

Mitchell passed away Thursday, February 4, 2016, one day before the 45th anniversary of his lunar landing. Rather than write a long commemorative article of a man lucky and clever enough to join the elite group of astronauts who walked on the Moon, I thought I’d let Mitchell tell you about his mission in his own words.

I’m also still live tweeting the Apollo 14 so come follow me on Twitter — @astVintageSpace — to get a sense of Mitchell as he, Shepard, and Command Module Pilot Stu Roosa return home from the Moon. You can also catch up on tweets you missed, including lunar landing and both EVAs, here. 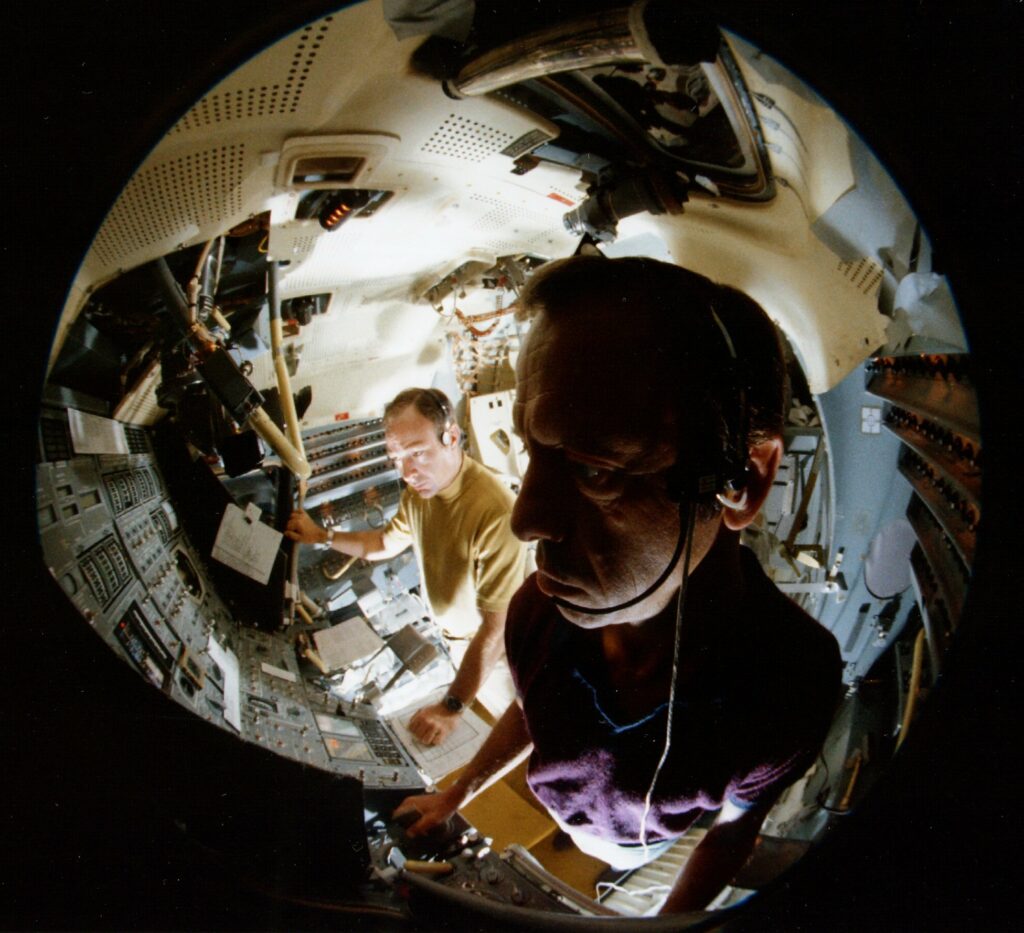 Training for the Moon

52 minutes into the mission: “And we Just burst into sunlight, Gordo. It was quite a sunrise… You’re asking about zero g and it’s – it’s really great. Everybody’s in great shape, we’re having a ball.” Image: Mitchell, in the background, is training in a Lunar Module simulator with Apollo 14 commander Al Shepard. July 15, 1970. 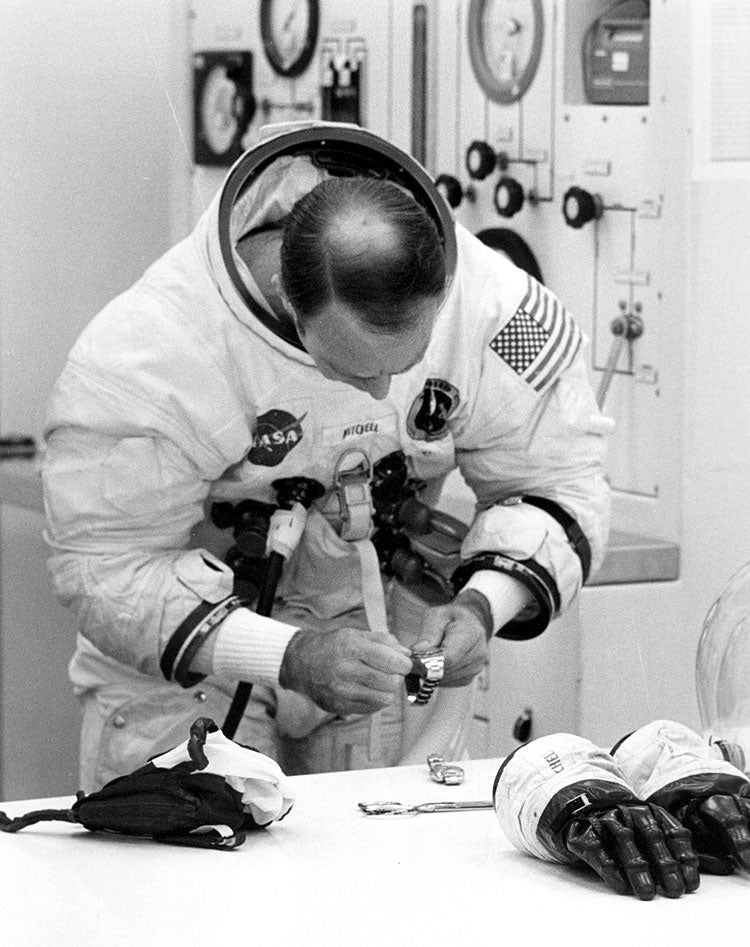 3 days, 14 hours, 30 minutes into the mission, around the farside of the Moon: “Oh, sure; that’s Tsiolkovsky [crater]. Okay. I’ve got it. Yes. That mother is black out there, isn’t it? And flat. And there are really a lot more color differences than I expected.” Image: Mitchell adjusts his watch before Apollo 14 leaves for the Moon on January 31, 1971. 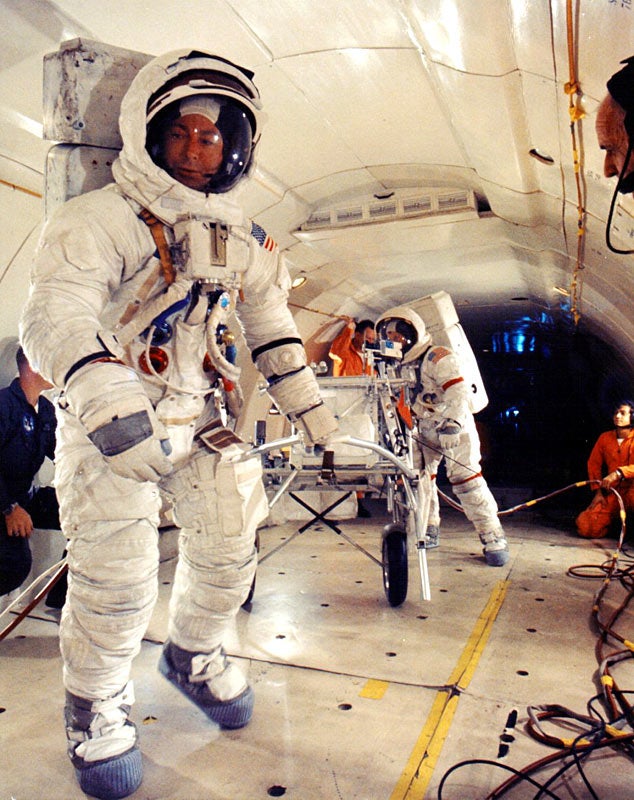 Practicing for a Moonwalk

3 days, 13 hours, 14 minutes into the mission, Apollo 14 is in orbit around the Moon: “Looks like we’re getting mighty low down here. It’s an entirely different sight from the higher altitude. We’re coming across the – we’re just now over the Crater Gutenberg. At this point, it’s out my back window… Those brown rocks – those brown mountains look like they have a nice soft blanket on them from altitude. They look very harsh, but the regolith looks smoother and more hummocky than quite so angular and sharp.” Image shows Mitchell training with a mockup of the MET in the KC-135 “vomit comet.” October 28, 1970. 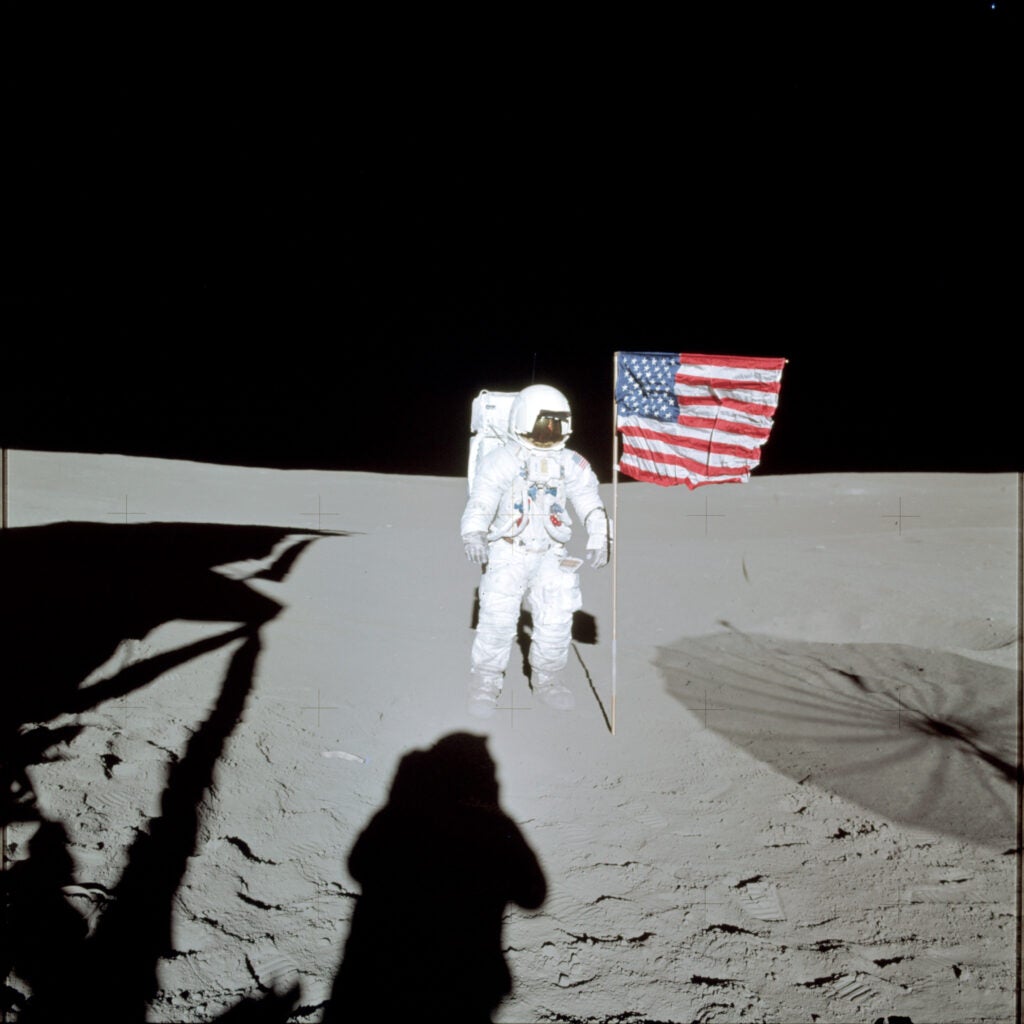 Lovely Day for a Moon Landing

3 days, 16 hours, 26 minutes into the mission: “Mitchell: We’ve had our second meal around the Moon. Shepard: We what? Mitchell: We’ve had our second – – Shepard: We’ve had our first one. Roosa: Huh? When was the first one? Mitchell: We were eating during our first REV. Roosa: No, we weren’t. Mitchell: Hell we weren’t! We were laying up here on the panel looking out the windows, and Al was passing food up. You were so excited that I guess you forgot it. That’s what we were doing.” Image: Mitchell with the America Flag at Apollo 14’s landing site, Fra Mauro, early in the first EVA. February 5, 1971. 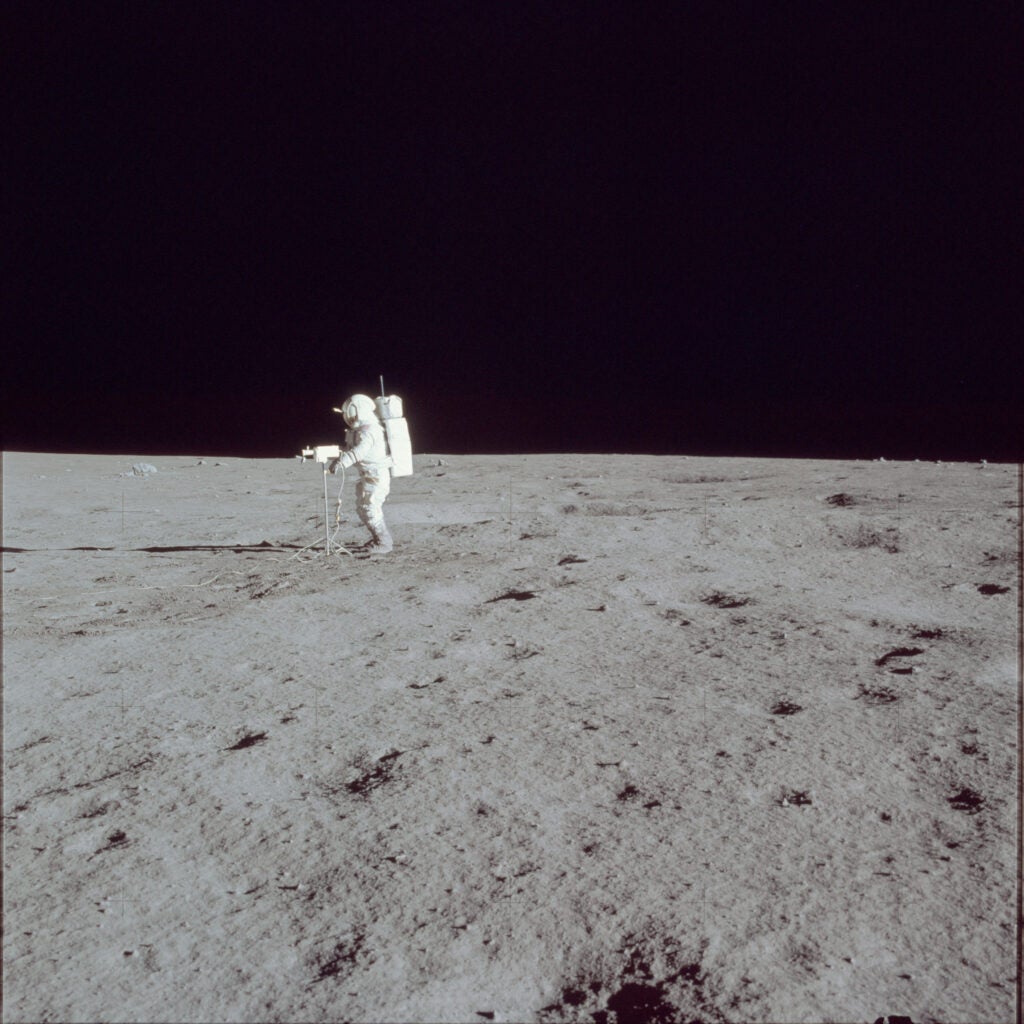 Live from the Moon

3 days, 15 hours, 10 minutes into the mission, Apollo 14 is in lunar orbit and capcom has just confirmed the spacecraft’s altitude over the Moon’s surface: “Well, I’m glad to hear you say we’re that high. It looks like we’re quite a bit lower as a matter of fact – below some of the peaks on the horizon, although that’s only an illusion… The surface appears to be a lot smoother down here where we can see – closer to the detail and, of course, particularly at this higher Sun angle, it appears to be a softer surface, but it certainly is an unusual sensation flying this low…. Houston, the scale is so deceiving we could be 500 feet in the air from the way this terrain looks.” Image shows Mitchell setting up a camera (I think during the first EVA). February 5, 1971. Strolling on the Moon

4 days, 13 hours, 28 minutes into the mission, Apollo 14 has just landed on the Moon: “Capcom: Antares, this is Houston. STAY. Acknowledge. Over. Mitchell: Okay. We’re having a little chuckle about that transmission but we acknowledge, very happily. Shepard: And we will stay.” Image shows Mitchell during Apollo 14’s second EVA, (very early morning EST). February 6, 1971 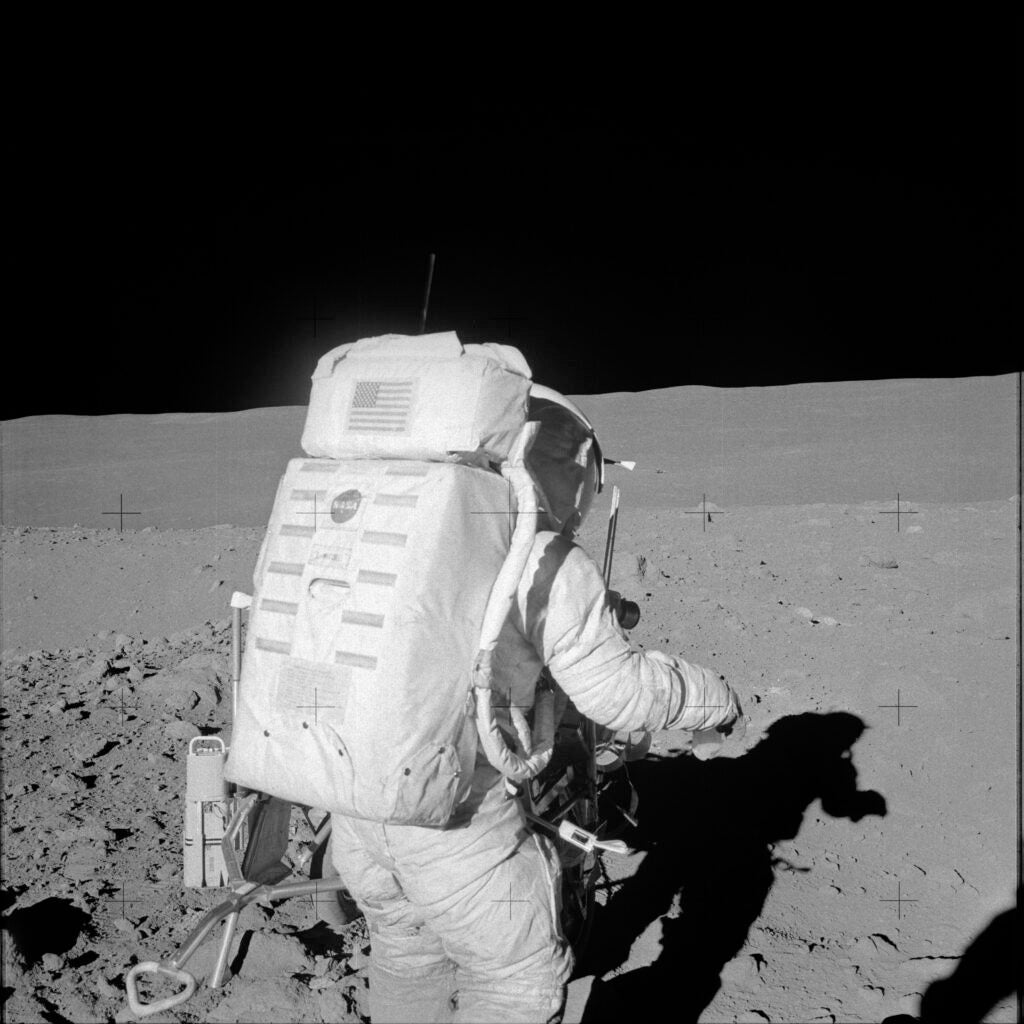 4 days, 13 hours, 56 minutes into the mission, Shepard and Mitchell are in the LM Antares describing the landing area to Houston: “Toward Doublet [crater] is a rise, and then the ridge that we had talked about that is beyond Doublet – is very pronounced. It forms our skyline or my near horizon. And we seem to be sitting in a bowl. It slopes toward us from the west; it’s rather choppy, I might admit, undulating, but the ridge beyond Doublet is the highest thing I can see in front of me. Looking around to the right, the skyline is quite undulating… Obviously very, very old craters that are almost lost – almost indistinct now between myself and the skyline to the north – the horizon to the north. It Just looks like a series of low hills from this vantage point, Houston. The undulations are far too complex for me to try to describe them right now… I’m sure I can do that as soon as I can get a better handle on our location. Let me suffice it to say that I think there is more terrain, more relief here, than we anticipated from looking at the maps.” Image shows Mitchell during Apollo 14’s second EVA. February 6, 1971. 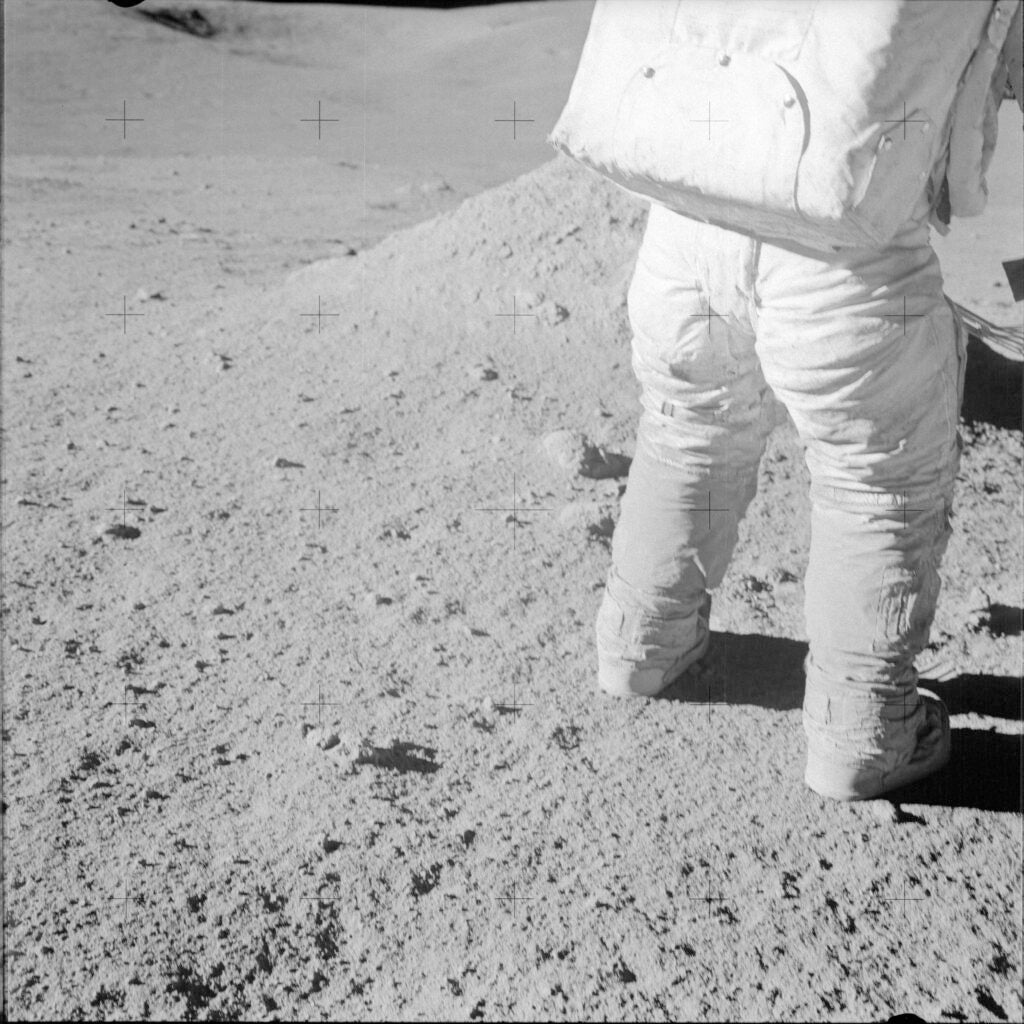 4 days, 18 hours, 11 minutes into the mission, both Shepard and Mitchell are on the surface, describing their landing location to Houston. Shepard has noted by now that the LM seems to be leaning, and Mitchell confirms and adds: “Houston, it looks as though we’ve landed in a fairly rough place… Yes; indeed it does. Evidenced by the fact that you [Shepard] put your front landing gear in a hole.” Image: Mitchell likely taking a sample during the second EVA, (very early EST on) February 6, 1971. 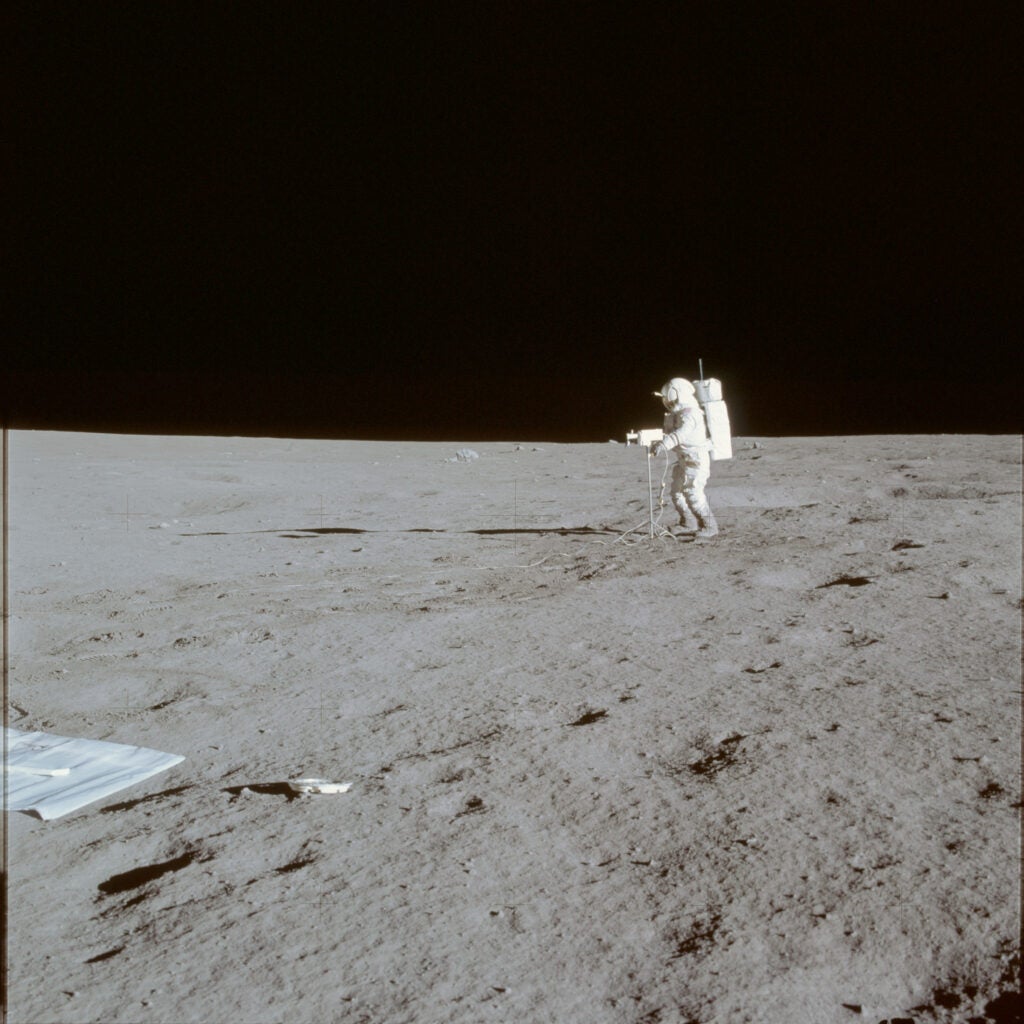 Bouncing Through the Dust

4 days, 19 hours into the mission. “Capcom: Ed. Are you reading me? Shepard: Ed. Are you reading Houston? Capcom: Ed– Shepard: Don’t look like Ed’s reading anybody. Capcom: Oh, God. Ed, this is Houston; we’re not reading you. Mitchell: Okay, Bruce, now you are; I hit the transmit switch to off. Capcom: Roger, loud and clear.” I can’t imagine a scarier moment than losing comms when you’re bouncing around on the Moon! Which is what Mitchell is doing here, possibly during the first EVA. February 5, 1971. 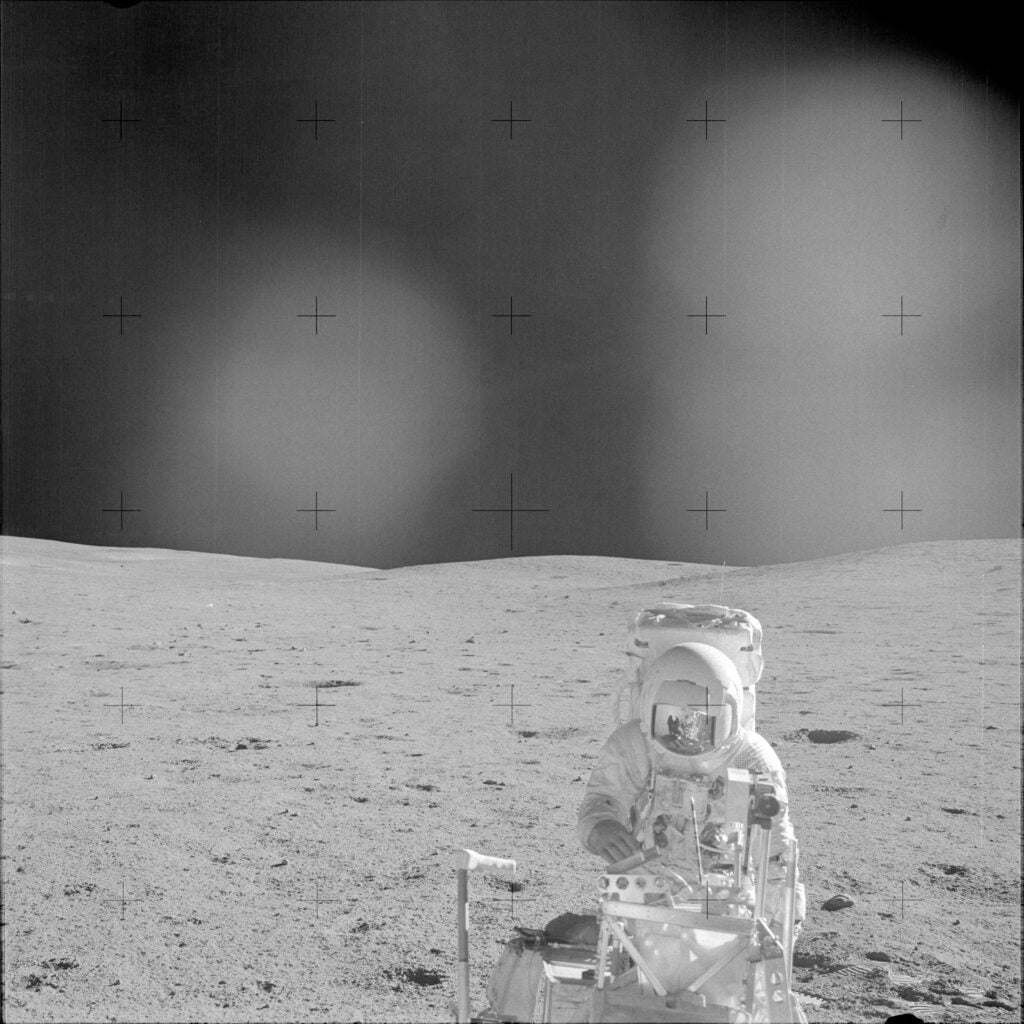 Working on the Moon

5 days, 1 hour, 22 minutes into the mission, Shepard and Mitchell are going through their post-EVA debriefing with Houston: “The regolith is mostly a mouse brown or sometimes looking gray, a powdery material. Almost like a – chalk, ground up; it’s that thin and that fine-grained. There are a few rocks scattered around… To me, it looked all about the same, as far as the general regolith here is concerned; but, again, we haven’t looked at it that carefully, or I didn’t look at it that carefully, just because of the press of time. By and large it is all – all this very fine-grain material with a few scattered rocks on top of it. Let’s see if we can do a better job of describing it tomorrow for you.” Image: Mitchell is working during Apollo 14’s second EVA (early morning EST) on February 6, 1971. 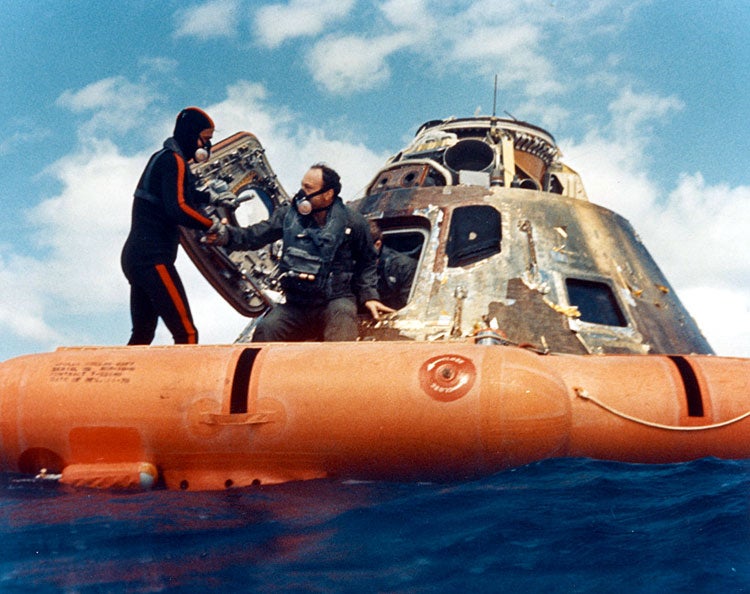 Back from the Moon

5 days, 18 hours, 41 minutes into the mission, Shepard and Mitchell are doing their final EVA debriefing with Houston not long before leaving Fra Mauro: “There were some things that we’d like to have done – yes, I think you’re right, Fredo. There are so many things we’d like to have done; so many things to do, so many interesting things to look at here, and we didn’t even have the chance to scratch the surface. We hope we’ve brought back something that you can sort out, as time goes on.” Image shows Mitchell being helped out of the command module Kitty Hawk after Apollo 14 splashed down on February 9, 1971.
Space
Apollo
astronauts
gemini
history
mercury