After 40 Years, New Results From The Moon’s Surface

Chinese lunar rover digs into the history of the moon's volcanoes 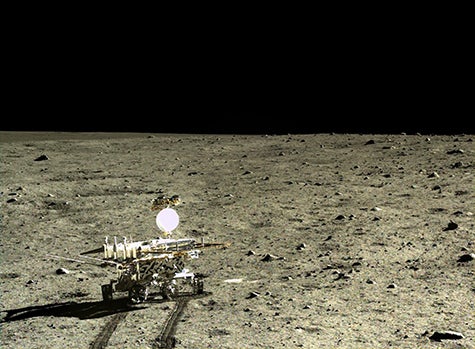 Yutu, as photographed by the Chang'e 3 lunar lander. CNAS/CLEP
SHARE

Back in 2013, Chinese lunar lander Chang’e 3 visited the moon, carrying with it a rover named Yutu, or ‘Jade Rabbit’. Now, two years later, the first scientific results from Yutu have been published.

In a paper published in Nature Communications an international team of researchers examined some of the first results from the Chang’e 3 mission.

Like the rocks found on other areas of the moon, the rocks examined by Yutu were basalts, rocks formed by volcanic activity a very long time ago.

Scientists think that the moon was a seething magma ocean about 4 billion years ago, soon after a giant moon-forming object slammed into the Earth. As it cooled down, parts of the magma ocean separated, with some parts sinking, and other, lighter parts of the ocean floating to the top. Periodically, heating from the center of the moon (hot with radiation) would force some material up, creating huge volcanic explosions, and leaving lava flows that became the Mares or ‘seas’ of the moon (the dark spots you see when you look at it).

Researchers looking at the Chang’e landing site from orbit noticed that they were seeing strange rocks mixed together, but hadn’t been able to verify their observations with actual samples. Now they can, and the research is opening up new windows into the composition of the Moon’s surface.

“We now have ‘ground truth’ for our remote sensing, a well-characterized sample in a key location,” Bradley Jolliff, a planetary scientist who studied the rover results, said. “We see the same signal from orbit in other places, so we now know that those other places probably have similar basalts.”

Other missions to the moon are already underway. Two companies, SpaceIL and Moon Express, have already booked passage to the moon sometime before December 31, 2017, both hoping to win the Google Lunar X-prize. By 2020, China hopes to be the first to send a lander to the dark side of the moon. Russia and Europe have plans for a joint mission to the lunar pole by 2020, with Russia pushing for a crewed mission by 2029.

Yutu, as photographed by the Chang’e 3 lunar lander. 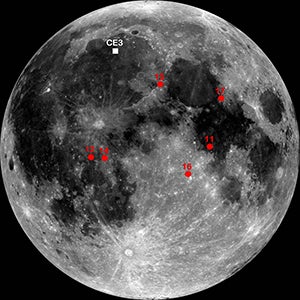 The site of the Chang’e 3 landing is in white. Apollo landing sites are in red. 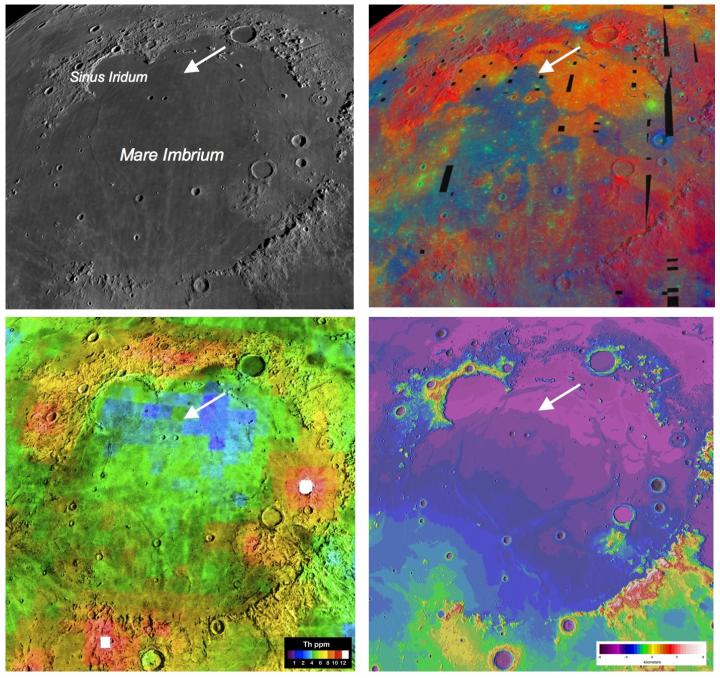 The white arrow points to the location of the Chang’e 3 lander. The four images show how the lunar surface looks under different types of remote sensing. Researchers can get a lot of information from orbit, but to accurately interpret what they see in satellite images, they need to get samples from the ground to verify their assumptions. This is known as the ‘ground truth.’
Moons
Solar System
Space
chang'e
china
rovers