How the Apollo lunar modules were smashed for science

Each Apollo lunar module cost about $149,000,000. So why were they unceremoniously smashed into the Moon? 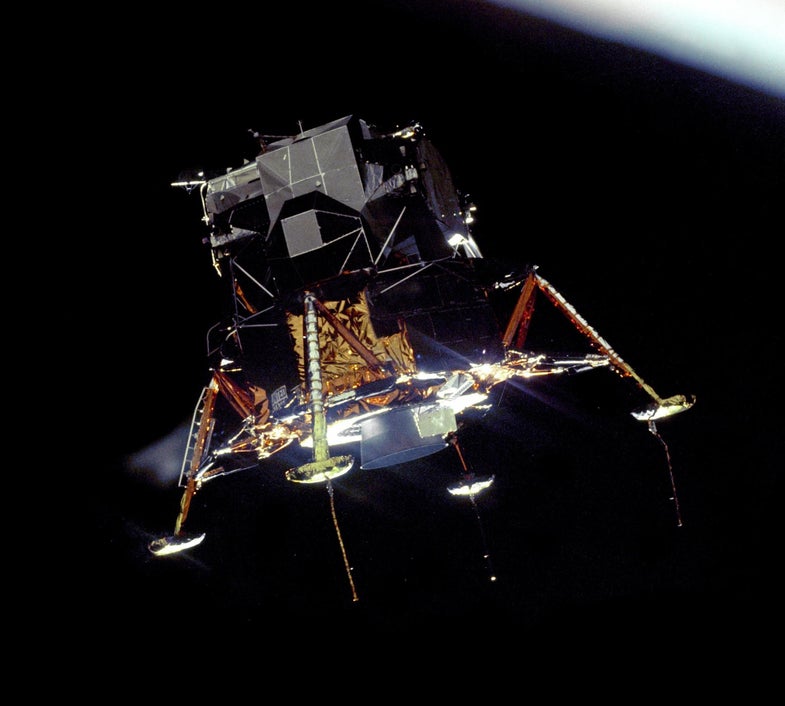 Each lunar module cost about $149,000,000; adjusted for inflation that’s just under one billion dollars per spacecraft. For all that money, not one was brought home to put on display in a museum. Not only was the Apollo lunar module not designed to survive reentry through the Earth’s atmosphere, each was abandoned or destroyed during its mission. The descent stages served as the launch pads for the ascent stages, so were all left in place on the Moon. The ascent stages, on the other hand, met a far more destructive end.

The story of the lunar module ascent stages goes hand in hand with the story of NASA doing seismic experiments on the Moon. Seismology, measuring how shock waves move across and through a planetary body, can tell scientists a lot about that body’s surface and internal structure. Seismologists do this on Earth by studying earthquakes, so NASA decided to do the same type of investigation on the Moon.

Lunar seismology experiments reached the Moon with each Apollo landing mission as part of the Apollo Lunar Surface Experiment Package or ALSEP. The ALSEPs were designed to explore the geophysical environment of the Moon, answering questions about its internal structure, geometric shape, tectonic activity if any, and shed light on the dynamic interaction between it and the Earth. The contract to build these lightweight but efficient instrument packages was awarded to the Bendix Systems Division of the Bendix Corporation in March of 1966 with a total budget of $17.3 million (about $126.5 million adjusted for inflation).

Each ALSEP was slightly different with a specific array of instruments honed for that mission’s landing site, but each package included some kind of seismometer. These were designed to answer two specific questions: whether the Moon has a molten core, and what the deep internal structure of the Moon is like.

Things got more sophisticated on later missions that brought full ALSEPs to the Moon. Apollos 12, 14, 15, and 16 featured a Lunar Passive Seismic Experiment designed to determine the Moon’s sub-surface properties and measure vibrations traveling through the body. Seismic motions were recorded and sent back to receiving stations on Earth where they were magnified by 10 million. The four experiments taken together allowed seismologists to pinpoint the origin of moonquakes in three dimensions and record the effects of almost daily meteorite impacts. They were even sensitive enough to record the surface effects of the Sun heating the lunar surface at the start of a new lunar day.

Apollos 14 and 16 had complementary Lunar Active Seismic Experiment in their ALSEPs. This was an experiment designed to study the local area of the Moon rather than the whole body, and being active it provided its own source of a boom for the instruments to measure. These booms were achieved with two kinds of explosives. One was series of small shotgun-like charges detonated by the astronauts at given intervals at given points relative to the ALSEP. The second explosion was far larger and used a mortar-type charge that had four grenades launch by self-contained rockets after the astronauts had left the Moon. These active experiments were designed specifically to reveal any layering nearly 1,000 feet beneath the Moon’s surface.

Apollo 17 added a Lunar Seismic Profiling Experiment to the mix. Similar to the earlier ALSEP passive seismometers, this one used a ground network of four stations placed at the centre and three points of a 295-foot equilateral triangle. Explosive charges detonated by ground controllers generated seismic waves of varying strengths for the instruments to measure. The charges done, the instruments became a Passive Seismometer.

But NASA wanted data from more than just natural quakes and impacts. Any impactor of a known size hitting at a known spot took variables out of the data for better results. And so the agency used what it had at its disposal to force results: spent rocket stages and spacecraft. After firing for the translunar injection burn that sent the Apollo spacecraft out of Earth orbit and to the Moon, the S-IVB upper stage of the Saturn V rocket was deliberately crashed into the Moon so the resulting vibrations could be measured by the seismometers previous missions had left on the surface.

The ascent stages of the lunar modules were also used for seismology. Once the lunar landing crew had transferred everything coming back to Earth from the lunar module and closed it out, the now useless spacecraft was jettisoned and directed by Mission Control to impact the Moon’s surface at a specific point near an ALSE. One of these controlled crashes brought some stunningly strange results. When Apollo 12’s lunar module Intrepid smashed into the lunar surface, the resulting shock wave vibrated through the Moon for more than 55 minutes. Scientists eventually chalked the wave’s continual propagation up to the Moon being so dry; dry rocks didn’t dampen the waves aw efficiently as they do on Earth.

The network of seismometers lefts on the Moon during Apollo recorded more than 1,700 meteoroid impacts and found that stresses from changes in lunar tides spawn monthly moonquakes totalling up to 300 each year that originate at about 100 distinct sites. These experiments also helped scientists determine that the Moon has a structure similar to the Earth: it has a crust with an average thickness of 31 miles that’s rich in the mineral plagioclase, a mantle made largely of olivine and pyroxene, and a relatively small core composed mostly of iron and sulphur.

Powered by a small radioisotope thermoelectric generator, each ALSEP was designed to work in its local lunar environment for at least a year after its crew left the surface. But they lasted far longer, gathering data for eight years before NASA permanently shut them all down in September of 1977. They are, of course, still up there along with the remains of the smashed S-IVB and lunar modules for future archaeologists to explore.