Urban dwellers are particularly at risk from the impacts of air pollution and other hazards on mental health. 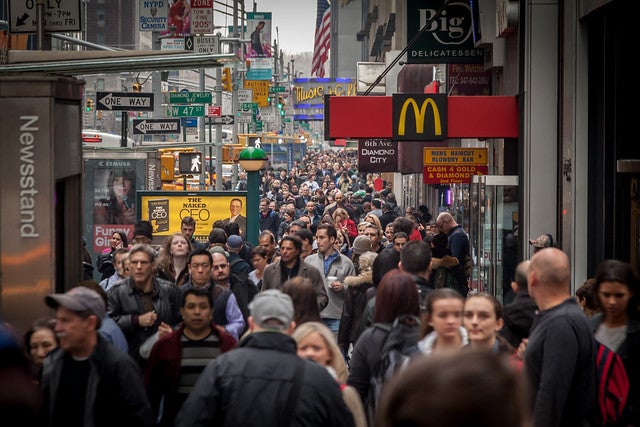 We’ve long known that the environments we live and work in impact our physical health—and that we can be harmed by things we may not even realize we’re being exposed to, like lead or air pollution.

It’s also not a new idea that our physical surroundings may weigh on our mental health as well. Back in the 1930s, two sociologists noticed a striking pattern amongst the people being admitted to Chicago’s asylums. Rates of schizophrenia, they reported, were unusually high in those born to inner-city neighborhoods. Since then, researchers have discovered that mental illnesses of all kinds are more common in densely populated cities than in greener and more rural areas. In fact, the Centre for Urban Design and Mental Health estimates that city dwellers face a nearly 40 percent higher risk of depression, 20 percent higher chance of anxiety, and double the risk of schizophrenia than people living in rural areas.

Some of the burden on city dwellers’ mental health can be traced to social problems such as loneliness and the stress of living cheek-by-jowl with thousands or even millions of other people. But there’s something about the physical nature of cities that also seems to put a strain on the emotional wellbeing of their inhabitants. City life means dealing with stressors like air and noise pollution stemming from traffic, construction, or your neighbors. However, it’s only in recent years that scientists have begun to seriously study the mechanisms through which exposure to various environmental stressors could be wounding our mental health, says Andreas Meyer-Lindenberg, director of the Central Institute of Mental Health in Mannheim, Germany. “It’s an emerging field,” he says.

Meyer-Lindenberg and his research partner Matilda van den Bosch, an environmental health researcher at the University of British Columbia in Vancouver, recently reviewed the scientific evidence for these and a number of other physical stressors to find out whether they contribute to depression. The pair searched for studies concerning a wide range of substances and situations that people might run across in everyday life. They discovered that while many of these factors were particularly abundant in cities, they weren’t limited to urban environments. For example, air pollution isn’t only found within city borders. Another potential danger was pesticides, which farm workers in particular come into contact with.

Still, a key part of improving our collective mental health will be making our cities more livable, says Meyer-Lindenberg. He and van den Bosch published their findings this year in the journal Annual Review of Public Health. More than half the world’s population already lives in cities and this number is expected to rise to nearly 70 percent by 2050.

“Globally we are becoming more and more increasingly urban, so neighborhoods are opening up and changing,” points out Marianthi-Anna Kioumourtzoglou, an assistant professor of environmental health sciences at the Mailman School of Public Health at Columbia University who has studied the impacts of air pollution on mental health. “We should consciously try and do that in a way that will promote mental wellbeing.”

The risks around us

In their review, Meyer-Lindenberg and van den Bosch found that some potential threats had been examined more thoroughly than others. For some, including pollen, there wasn’t enough information yet to show a convincing link to depression. However, the team did find a number of studies suggesting that heavy metals like lead, pesticides, common chemicals like bisphenol A (BPA), and noise pollution may contribute to depression, although further research is still needed to confirm that this is the case.

Even more compelling was the evidence condemning air pollution. In addition to causing respiratory and cardiovascular problems that kill millions of people each year, this particular menace raises our risk for a number of psychiatric problems. Poor air quality has been associated with depression, anxiety, and psychotic experiences such as paranoia and hearing voices.

In the United States, emissions for many common pollutants have decreased sharply in the decades since the Clean Air Act took effect. However, “just the fact that levels have been going down does not mean they are safe,” says Kioumourtzoglou. “We all breathe, so we are all involuntarily exposed.” She and her colleagues have found that women who live in highly polluted neighborhoods are more likely than others to report symptoms of anxiety and take antidepressants.

Meyer-Lindenberg and van den Bosch also delved into the potential connection between city living and depression. “Cities are an interesting case,” Meyer-Lindenberg says. On average, city dwellers have access to better healthcare and education than other people. “So cities are good for most aspects of human life…it’s just that mental health shows the flip side of cities.” Urban areas, he believes, are harmful both because of the lack of greenery and the presence of particularly high amounts of toxic exposures such as air pollution.

This doesn’t mean that if you live next to a highway or above a bar you’re doomed to develop depression or anxiety. Many people thrive in cities. And mental illnesses are caused by a complex tangle of genetics and life circumstances; it’s rarely possible to pick out a single issue and name it as the culprit, Meyer-Lindenberg says. Rather, hazards like air pollution raise a person’s overall risk, especially for those who are already vulnerable for other reasons. How strongly our physical surroundings affect this risk is something scientists have not yet figured out. For people in poor communities, though, the impact is likely especially potent; not only does financial stress contribute to depression, but low-income neighborhoods face disproportionately high levels of air and noise pollution and lead exposure.

How exactly these things prime the brain for depression is not entirely clear. Some issues, such as noise pollution and possibly pollen, are aggravating enough that they may contribute to depression by constantly wearing down our mood. Our surroundings also harm us in ways we aren’t consciously aware of, perhaps by damaging our neurons or altering the abundance of chemical messengers like serotonin, according to Meyer-Lindenberg. Air pollution and other substances may prompt an inflammatory response that over time takes a toll on the brain, Meyer-Lindenberg says. In children, exposure to these hazards may also prevent the brain from developing normally.

The idea that so many things we encounter in everyday life could be threatening our mental wellbeing is an alarming one. But our physical environments can also nourish our mental health. There’s plenty of research showing that our risk for depression and other psychiatric disorders is lowered by— you guessed it—contact with nature. People are more physically active while in nature and the sights, sounds, and smells of greenery and oceans soothe us and give our mood a boost.

In one experiment, scientists discovered that after a stroll in nature people are less prone to rumination, the tendency to obsess over one’s mistakes and troubles that is a common feature of disorders like depression and anxiety. The nature walk also calmed activity in several brain regions involved in rumination and responding to threats to our sense of belonging or feelings that we’ve made a social misstep. One of these brain areas—known as the perigenual anterior cingulate cortex, which is involved in regulating our emotions—may be key to understanding how our environments can harm or help our mental health, Meyer-Lindenberg believes.

“A lot of the risk factors that we’ve been looking at tend to hit the same brain system,” he says. He and his colleagues have found that this part of the brain responds particularly strongly to socially stressful situations in people who were raised in cities. This area also seems to be influenced by a number of genes that have been linked to susceptibility towards depression and other psychiatric illnesses, suggesting it may be important to our mental health.

Nearly one in five adults in the United States live with a mental illness, while depression is considered the leading cause of disability worldwide by the World Health Organization. This makes it vitally important for us to learn more about how the world around us is shaping our mental health, van den Bosch says. She hopes this information will give policymakers incentives to further tighten restrictions on air pollution and other noxious products of human industry.

“We know that many of these things are bad, and do we really need more evidence? It seems like the answer is yes,” says van den Bosch. Even if the effect on our overall risk for mental illness turns out to be small, she says, “It will still have a huge impact on population health.”

Kioumourtzoglou also hopes to see research probing whether exercise, time in nature, or other actions could offset the risks that air pollution and other hazards pose to our mental health. Whatever these steps are, they likely won’t be easy or practical for everyone. That’s why it’s also important to inject greenery into our cities, where many hazards are most concentrated. Not only do parks and street trees give city dwellers a revitalizing dose of nature, they also help us by muffling noise and absorbing pollutants.

We can’t just flatten our cities and rebuild them into forested utopias, Kioumourtzoglou admits. But we can keep environmental health in mind when planning new neighborhoods and refurbishing existing ones. “Sometimes it takes a while for new and more protective regulations to kick in—and we need to know what we can do in the meantime to protect ourselves,” she says.