They were the first at the scene on 9/11. Twenty years later, they're helping us learn the long-term health consequences. 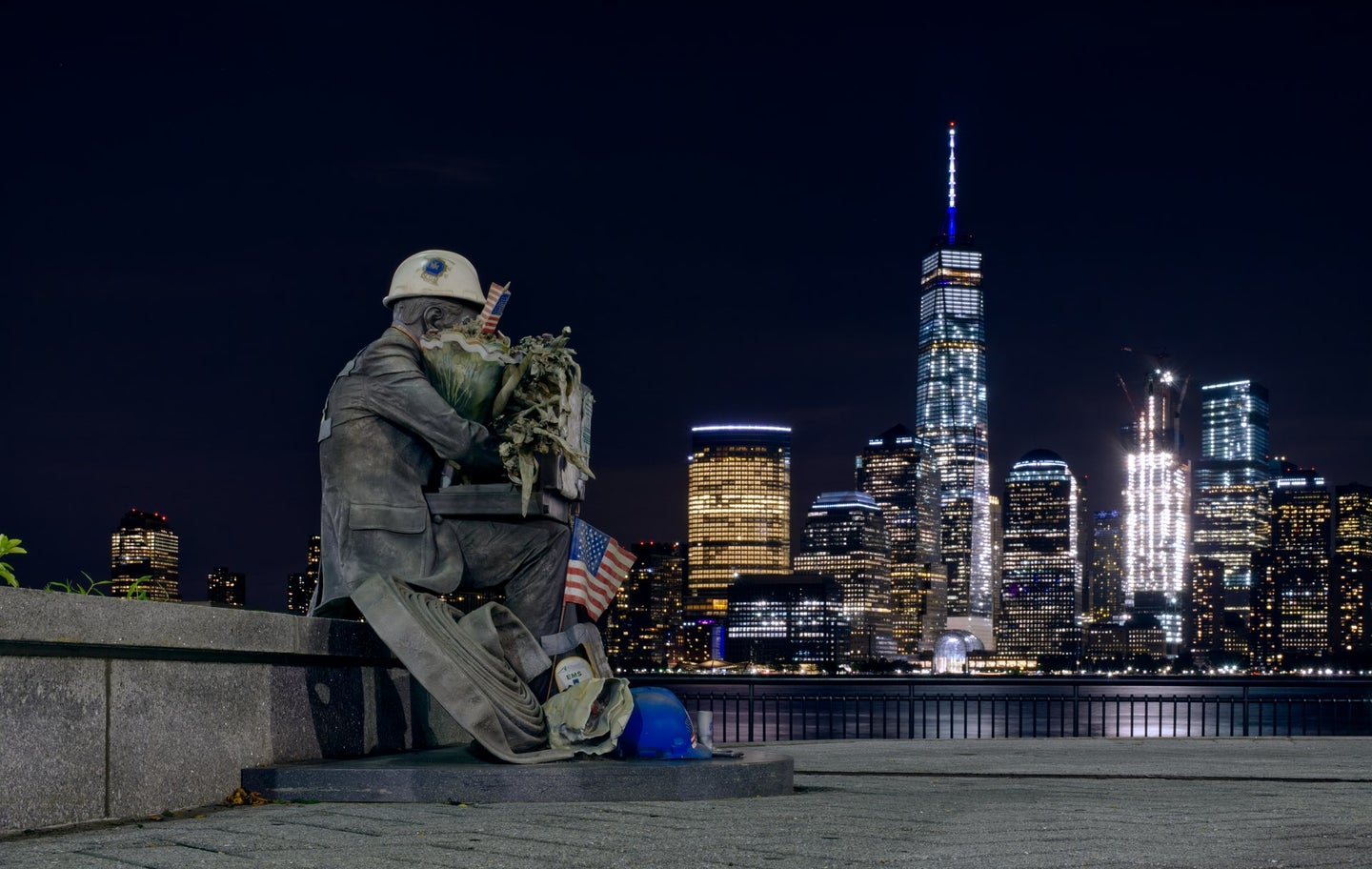 Two decades later, many of these heroes are getting sick. Unsplash
SHARE

When the planes hit the World Trade Center on September 11, 2001, federal law enforcement officer Raymond Gauvin followed his training without hesitation. His office, at 26 Federal Plaza, was less than a mile from the site. He arrived to help rescue people from the rubble within minutes.

“I would have never guessed there would be consequences medically, later on,” Gauvin says.

Twenty years later, Gauvin has suffered from bladder cancer, inflammation in his nose, acid reflux, and post-traumatic stress disorder (PTSD). All of these health impacts—along with other cancers, respiratory diseases, and mental health conditions—are especially common among the first responders and survivors who worked at the World Trade Center site, both on September 11 and in the months of clean up afterward.

Through treating and studying these patients for two decades, clinicians have identified previously unknown connections between pollution exposure and numerous health conditions. Continued research will further develop scientific understanding of these conditions and help others impacted by pollution.

Like Gauvin, most first responders never anticipated the medical consequences of responding to the attacks. But doctors at the New York City Fire Department (FDNY) and other worker groups soon began to notice a persistent symptom among rescuers. They called it “World Trade Center Cough.” It proved to be just the first physical manifestation of the intense pollution they had inhaled on site.

“These 110-story towers essentially got pulverized into small fragments,” says John Howard, a doctor and public health expert serving as administrator of the World Trade Center Health Program. Those bits included particulate matter—a dangerous form of pollution often released from burning fossil fuels and in wildfires—along with asbestos fibers and more than 200 other carcinogens. Tiny particulate matter is particularly dangerous to lung health, as it’s small enough to easily inhale but large enough to damage the respiratory system.

In addition to rescues and recovery efforts on September 11, many first responders continued to work at Ground Zero for months afterward—which meant they continued to breathe in that toxic pollution. Some toiled there for as long as ten months, until July 2002.

Initially, survivors and first responders faced respiratory impacts: the World Trade Center Cough, along with swelling in the nose and head, a condition called chronic sinusitis. Many responders also developed asthma, while some experienced gastroesophageal reflux disease (also called acid reflux) as the pollution irritated their throats. Doctors working with the first responders developed treatments for the cough and other common symptoms, leading to significant improvements for the patients. For example, more than half of FDNY first responders had a persistent cough in 2001; this had dropped to 9 percent by 2021.

Some patients didn’t fit the “classic asthma phenotype” but lost lung function over time, “similar to what you see in a smoker,” says Anna Nolan, a professor at New York University’s medical school who works with FDNY first responders. This lung damage led to further respiratory conditions, such as chronic obstructive pulmonary disease (or COPD), where airflow is blocked from the lungs. Prior to 2001, scientists had little understanding of the risks (besides smoking) that cause asthma and COPD; studies of first responders with these conditions illuminated key processes in the body and led to new treatments, such as drugs targeting eosinophils, a type of white blood cell.

Respiratory ailments aren’t the only concern for first responders. When someone inhales toxic pollution like the particles released by the World Trade Center attacks, many of these toxins stay in the body permanently. Some become embedded and pass into the bloodstream, carried from lungs to other organs. Over the long-term, these carcinogens can raise the risk of various cancers; studies have shown that first responders may be twice as likely to develop some cancers compared to those who weren’t at Ground Zero. Nolan has seen skin cancer, lung cancer, bone cancer, breast cancer, thyroid cancer, and others among her patients. Pollution was not well-known as a cause for cancers (besides lung cancer) before World Trade Center researchers demonstrated a link in the early 2010s.

In fall 2001, the Centers for Disease Control and Prevention (CDC) and local agencies started screening first responders for health issues. Over the 2000s, this health screening program grew into the World Trade Center Health Program (or WTC Health Program), a national organization providing research and treatment to first responders and survivors. The program was officially established with the 2010 Zadroga Act, named for James Zadroga, a police officer who died of a September 11-related respiratory disease. In 2015, Congress renewed the act—funding the health program until 2090.

“It looks like another federal health plan,” Howard, the program’s administrator, says. But unlike Medicare or Medicaid, the WTC Health Program only covers conditions that may be directly linked to pollution exposure on September 11. And to account for how little we know about what health impacts first responders might suffer, members can petition the program to study conditions not already on that coverage list. These requests are a major driver of ongoing research. Current areas of study include autoimmune conditions and cognitive impacts, as recent reports have linked pollution exposure to Alzheimer’s and other forms of dementia.

Untangling the effects of 9/11 pollution from a survivor’s baseline risk of illness will only get more complicated as they grow older. The average first responder is now in their 50s, Nolan says. “They are developing a lot of things that most of us get as we age, but the question becomes, in this population, will they develop it more?”

[Related: In Louisiana’s ‘Cancer Alley,’ a Black community battles an industry that threatens its health—and history]

In Gauvin’s case, his bladder cancer developed years after the September 11 attacks. The law enforcement officer was diagnosed in 2013, after experiencing intense pain in his lower abdomen while on vacation. Upon reporting his diagnosis to the WTC Health Program, the organization immediately took charge of all his care; bladder cancer has been linked to air pollution exposure by World Trade Center researchers and in other studies. Gauvin had access to the latest cancer treatments with zero deductibles or copays—including an intensive surgery that allowed him to keep working.

Cancer patients admitted to the WTC Health Program are far more likely to survive their treatment than others in New York State, according to an analysis by FDNY researchers. The health program’s cancer screening and case management protocols—which provide patients with much more extensive monitoring than the average physical—may offer a model to other healthcare providers caring for patients impacted by pollution, and perhaps even for cancer treatment as a whole.

Gauvin is now retired and lives in Delaware, but he still drives to the WTC Health Clinic at Rutgers University in New Jersey for physicals, tests to ensure his cancer is still in remission, and other medical procedures. “As long as I can drive the two hours,” he says, “I will do what I gotta do to go up there.”

The WTC Health Program additionally supports first responders and survivors with PTSD, anxiety, depression, and substance use disorder. Through the program, these patients may access free mental health care that’s specifically catered to their experiences.

More than 300 firefighters and 60 police and law enforcement officers died on September 11, responding to the attacks. Twenty years later, 81,000 first responders are enrolled in the WTC Health Program—along with 30,000 survivors who lived and worked near the World Trade Center.

By researching the health impacts of this tragedy and caring for first responders, scientists have learned valuable lessons for current and future victims of toxic pollution—like those living on the wildfire-torn West Coast. September 11 was the first “long-duration disaster in which respiratory protection was important,” Howard says. First responders found that their respirators could not stand up to 8-12 hour shifts, for instance, so companies had to improve these devices; now, wildland firefighters and other emergency personnel have access to better respirators.

The September 11 response has also taught federal health agencies to keep rosters of the people present at a disaster site, so that researchers may follow up with them later. And, Howard says, he’s learned the importance of taking pollution measurements at different spots in a disaster zone, so that researchers may determine different responders’ individual exposure levels.

For Gauvin, the main lesson is simple: “If you have to deal with any type of [pollution], you need to have some PPE right away,” he says. Gauvin frequently tells his son-in-law, a state trooper in Delaware, and other first responders to remember their masks and to get regular health checks.

“We think we’re invincible,” he says. But sometimes, simply relying on instinct in a disaster—as he did 20 years ago—may have unforeseen consequences. “Rushing into a building is not always the positive thing to do,” he says. “We have to think a little bit before we do it.”