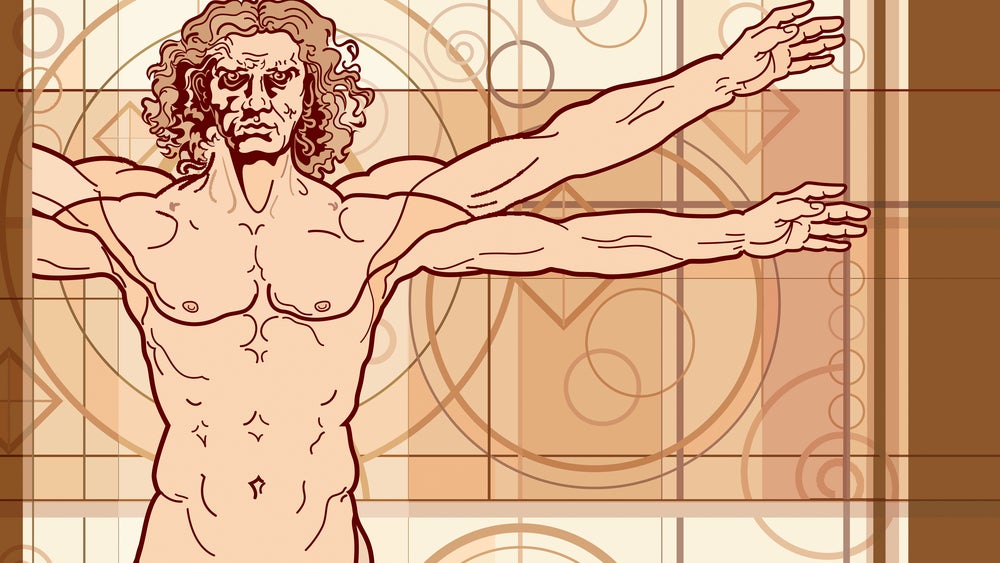 'Homo vitruviano' fragment. So-called The Vitruvian man a.k.a. Leonardo's man. Detailed drawing on the basis of artwork by Leonardo da Vinci, executed him c. 1490 (in 1487 or 1490 or 1492) by ancient manuscript of Roman master Marcus Vitruvius Pollio.
SHARE

The seventeenth century was approaching. The universe was one in which celestial bodies moved around the stationary Earth powered by individual spirits, ineffable planetary souls.

Their spirits may have been driving, but the planets also needed a vehicle for motion, so they were assumed to be riding on pure crystalline spheres. The spheres were invisible from Earth and interlocked, like the gears of a clock, to produce collective motion at a constant speed for all eternity. That clockwork universe was the one German astronomer Johannes Kepler inherited. He accepted it, at first.

When the constellation Cassiopeia suddenly gained a new star (it was actually a supernova, the bright explosion at the end of a star’s life), Kepler recognized that the idea of the unchanging heavens could not be correct.

By 1596, when he turned twenty‑five, Kepler had accepted the Copernican model of planets orbiting the sun, and now he posed another profound question: Why do planets that are farther away from the sun move more slowly? Perhaps the more distant planets had weaker “moving souls.” But why would that be? Just coincidence? Maybe, he thought, rather than many spirits, there was just one, inside the sun, which for some reason acted more powerfully on nearby planets. Kepler was so far outside the bounds of previous thought that there was no evidence in existence for him to work from. He had to use analogies.

Not just light, heat, odor, currents and boatmen, but optics of lenses, balance scales, a broom, magnets, a magnetic broom, orators gazing at a crowd, and more. He interrogated each one ruthlessly, every time alighting on new questions. He eventually decided that celestial bodies pulled one another, and larger bodies had more pull. That led him to claim (correctly) that the moon influenced tides on Earth. Galileo, the embodiment of bold truths, mocked him for the ridiculous idea of “the moon’s dominion over the waters.”

It is a truism to say that Kepler thought outside the box. But what he really did, whenever he was stuck, was to think entirely outside the domain. He left a brightly lit trail of his favorite tools for doing that, the ones that allowed him to cast outside eyes upon wisdom his peers simply accepted. “I especially love analogies,” he wrote, “my most faithful masters, acquainted with all the secrets of nature. One should make great use of them.”

Mention Kepler if you want to get Northwestern University psychologist Dedre Gentner excited. She gesticulates. Her tortoiseshell glasses bob up and down. She is probably the world’s foremost authority on analogical thinking. Deep analogical thinking is the practice of recognizing conceptual similarities in multiple domains or scenarios that may seem to have little in common on the surface. It is a powerful tool for solving wicked problems, and Kepler was an analogy addict, so Gentner is naturally very fond of him.

“In my opinion,” Gentner told me, “our ability to think relationally is one of the reasons we’re running the planet. Relations are really hard for other species.” Analogical thinking takes the new and makes it familiar, or takes the familiar and puts it in a new light, and allows humans to reason through problems they have never seen in unfamiliar contexts. It also allows us to understand that which we cannot see at all. Students might learn about the motion of molecules by analogy to billiard‑ball collisions; principles of electricity can be understood with analogies to water flow through plumbing. Concepts from biology serve as analogies to inform the cutting edge of artificial intelligence: “neural networks” that learn how to identify images from examples (when you search cat pictures, for instance) were conceived as akin to the neurons of the brain, and “genetic algorithms” are conceptually based on evolution by natural selection—solutions are tried, evaluated, and the more successful solutions pass on properties to the next round of solutions, ad infinitum.

Kepler was facing a problem not just new to himself, but to all humanity. There was no experience database to draw on. To investigate whether he should be the first ever to propose “action at a distance” in the heavens (a mysterious power invisibly traversing space and then appearing at its target), he turned to analogy (odor, heat, light) to consider whether it was conceptually possible. He followed that up with a litany of distant analogies (magnets, boats) to think through the problem.

Most problems, of course, are not new, so we can rely on what Gentner calls “surface” analogies from our own experience. “Most of the time, if you’re reminded of things that are similar on the surface, they’re going to be relationally similar as well,” she explained. Remember how you fixed the clogged bathtub drain in the old apartment? That will probably come to mind when the kitchen sink is clogged in the new one.

But the idea that surface analogies that pop to mind work for novel problems is a “kind world” hypothesis, Gentner told me. Like kind learning environments, a kind world is based on repeating patterns. “It’s perfectly fine,” she said, “if you stay in the same village or the same savannah all your life.” The current world is not so kind; it requires think‑ ing that cannot fall back on previous experience. Like math students, we need to be able to pick a strategy for problems we have never seen before. “In the life we lead today,” Gentner told me, “we need to be reminded of things that are only abstractly or relationally similar. And the more creative you want to be, the more important that is.”

Dedre Gentner wanted to find out if everyone can be a bit more like Kepler, capable of wielding distant analogies to understand problems. So she helped create the “Ambiguous Sorting Task.”

It consists of twenty‑five cards, each one describing a real‑world phenomenon, like how internet routers or economic bubbles work. Each card falls into two main categories, one for its domain (economics, biology, and so on) and one for its deep structure. Participants are asked to sort the cards into like categories.

For a deep structure example, you might put economic bubbles and melting polar ice caps together as positive‑feedback loops. (In economic bubbles, consumers buy stocks or property with the idea that the price will increase; that buying causes the price to increase, which leads to more buying. When ice caps melt, they reflect less sunlight back to space, which warms the planet, causing more ice to melt.) Or perhaps you would put the act of sweating and actions of the Federal Reserve together as negative‑feedback loops. (Sweating cools the body so that more sweating is no longer required. The Fed lowers interest rates to spur the economy; if the economy grows too quickly, the Fed raises rates to slow down the activity it launched.) The way gas prices lead to an increase in grocery prices and the steps needed for a message to traverse neurons in your brain are both examples of causal chains, where one event leads to another, which leads to another, in linear order.

Alternatively, you might group Federal Reserve rate changes, economic bubbles, and gas price changes together because they are all in the same domain: economics. And you might put sweating and neurotransmission together under biology.

Gentner and colleagues gave the Ambiguous Sorting Task to Northwestern University students from an array of majors and found that all of the students figured out how to group phenomena by domains. But fewer could come up with groupings based on causal structure. There was a group of students, however, who were particularly good at find‑ ing common deep structures: students who had taken classes in a range of domains, like those in the Integrated Science Program.

Northwestern’s website for the program features an alum’s description: “Think of the Integrated Science Program as a biology minor, chemistry minor, physics minor, and math minor combined into a single major. The primary intent of this program is to expose students to all fields of the natural and mathematical sciences so that they can see commonalities among different fields of the natural sciences The ISP major allows you to see connections across different disciplines.”

The trouble with courses of study like Northwestern’s Integrated Science Program, which impart a broad mixture of strategies, is that they may require abandoning a head start toward a major or career. That is a tough sell, even if it better serves learners in the long run.

There is often no entrenched interest fighting on the side of range, or of knowledge that must be slowly acquired. All forces align to incentivize a head start and early, narrow specialization, even if that is a poor long‑term strategy. That is a problem, because another kind of knowledge, perhaps the most important of all, is necessarily slowly acquired—the kind that helps you match yourself to the right challenge in the first place.

From RANGE: Why Generalists Triumph in a Specialized World by David Epstein, published by Riverhead, an imprint of Penguin Publishing Group, a division of Penguin Random House LLC. Copyright (c) 2019 by DAVID EPSTEIN.